Welcome, fellow survivors! All aboard the S.S. Headshot! Toot toot!

So, you’re probably a little confused right now. The dead are walking the earth, and here you are on a pimped-up cruise ship just off the coast of Southampton with me and my elite team. I know you have a lot of questions, like “Who are you?”, “Why are there zombies?” and “What the hell am I doing in Southampton?” Just try to relax, and I’ll explain as best I can.

I’m Laura, but you can call me Captain or Pirate King. It was my idea to commandeer this damn fine ship to use as a fortress against the undead. And what a wonderful fortress it is! You know who else has a swimming pool, an ice rink and a climbing wall in their safehouse? Yeah, me neither. Plus it gives you a great excuse to sing this song:

But in all seriousness, this is probably the safest safehouse in the world. It floats, so we can’t easily be boarded by the undead, plus it can fit 10,000 people on board, so nobody will get turned away. Well, except for the zombies. So, you just pick a room, hit up one of the restaurants for dinner (you’ll have to cook it yourself, though, the head chef is, uh… off sick) and come meet the rest of my merry band of adventurers! 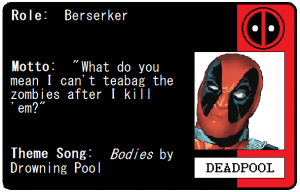 First up is Deadpool. I know, I know, he looks creepy, but he’s a handy guy to have around. Aside from the fact that he dual-wields katanas and carries more guns, grenades and grappling hooks than one person can physically lift, his sense of humour always brightens up those dreary Sunday afternoons when there’s no zombies around to kill and hide and seek has lost its appeal. Oh sure, he’s crazier than Pinkie Pie on acid, but you need a little crazy when smashing the skulls of your dearly departed loved ones is the order of the day. And hopefully, when it comes time to send him on a suicide run into the oncoming zombie horde, that healing factor of his might just help him survive. Or it might not. It’s kinda erratic. 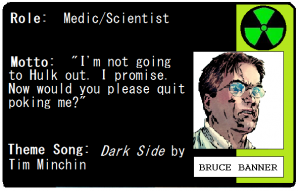 Down in sick bay you’ll find Dr Bruce Banner. He’s currently separated the Hulk bit of himself into a completely different body- I have no idea, the guy’s a genius, you think I can explain this shit? Anyways, he’s still a doctor, with an off-the-charts IQ and an entire floor full of crazy gamma technology. Apparently he has a taser that could kill Wolverine. For real! And I heard that he’s working on a gamma shield big enough to cover the whole ship, so that’ll come in handy. Oh, and definitely go see him as soon as possible, you’ll need to be bioscanned to double-check you’re not a Z-virus carrier. And if you are, well… 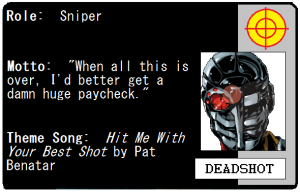 Up on the roof we’ve got Deadshot. Those two zombies chasing you that exploded randomly before you could even see the ship? That was Deadshot’s doing. Dude’s got a bionic eye, but even without it he’s a perfect shot. Good thing the zombie apocalypse has put us on the same side, else I’d be worried he’d put one in my brain and steal the ship! Ha!

[Note to self: get Banner to hurry up with that gamma shield and give me a little portable one] 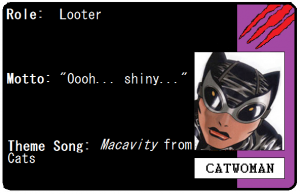 Catwoman should be swinging in with the loot round about now. I’d be worried she got bitten by zombies, but if there’s anyone who knows how to steal supplies without getting caught, it’s her. Granted, she’s used to stealing smaller, shinier things, but she managed to steal a lorryload of medical equipment on our first day. I had no idea she knew how to hotwire a lorry, but what can I say, the girl’s full of surprises! Besides, I’m pretty sure she only steals stuff for the thrill of it, and what could be more thrilling than stealing stuff whilst avoiding being afflicted with the living death? 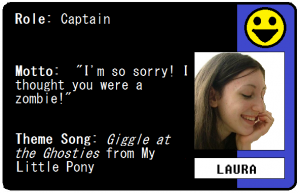 And then there’s me. What do I bring to the table, you ask? Well, aside from the fact that holing up in this incredibly awesome safehouseboat was totally my idea, I am documenting the apocalypse in the form of my daily Captain’s Logs.  I’m fairly bendy, so I can be folded up for easy storage, plus I have this totally sweet Captain’s hat…

OK, I have no zombie-killing skills.  But if you tell anyone that I shall have you keelhauled.

At the time of character creation, Laura Maier made the mistake of putting all her points in charm. While this was probably an unwise decision, it's served her well so far. Her power animal is the platypus.
You might also like
blogbreakingbruce banner