Yesterday I graced Manchester with my presence on a rare weekend off, just so I could enjoy Free RPG (Roleplay Game) Day.  Each year there are a couple of freebie days where you can grab Comics/RPGs/CCGs from your local hobby stores, in the hope that you pick up with the hobby and motivate business.  Its a great way of picking up a new type of gaming, or pick up a system you’ve never tried for the veteran RPG players out there.  We arrived early, just to ensure that we managed to grab some free dungoen loot from our local two shops; Travelling Man and Fan Boy 3. 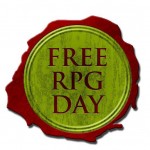 Well I was disappointed.  Upon arriving at Travelling Man the store wasn’t even ready for Free RPG day, which was a let down to start with.  Whenever it is free Comic Book Day, most stores are set up pre-8am, ready and prepared for the people willing to pour through the doors and not only grab free stock, but purchase some items.  As someone who has worked for a company that prides itself on ensuring the customer gets the best impression when they walk through the door, not enough was done to prepare for Free RPG Day.  Alas the store owner got chatting to us about RPG Day, the hobby in general and made us feel very welcomed in the end.  Once the store was set up he even invited us to take some samples from the table, which we did.  We were told that later there would be interactive games to take part in, but at that point, it would have meant standing around waiting for them to occur.  So we decided to go for a wander to Fan Boy 3, to check out their events for the day surely the most popular gaming haunt in Manchester would have something going on, especially during such an important day.

No.  Nothing was set up, nothing was presented, and although the girl behind the counter was one of the nicest girls I have spoken too, she didn’t know where the stuff was or what to do with it.  So AGAIN I had been let down, two of the only serious RPG games retailers in Manchester just hadn’t performed close to par.  Deciding to sit it out and check FB3’s we played Munchkin and, forty five minutes later, someone arrived to set up the store for Free RPG Day.  Same selection, but limited to one item per customer.  Not person taking part in an event; customer.  What was more off putting was the actual moaning about how it costs money to buy the kit and, really, its worth nothing to them.  I was wholey disappointed with the days events, and expressed as much to my friend, I wanted to sit around a table, try some games out and have a laugh.  I was left mortally unhappy with the days events.

If the Manchester RPG scene wants to impress in the future, more needs to be done during days like today.  Being prepared for the people who are into roleplay games coming into the store looking for your introductory games, ran professionally, would leave an amazing feel good attitude, and probably open their wallets.  Walking into a unprepared, unhappy store, bitter about giving things away will drive down business.

The loot, however, was great.  Considering it cost me £0.00 it is the only saving grace of the day.  I got a total of seven prizes today, all worth the time I spent waiting.  I won’t list it all, but I will go through some of my favourite highlights.

Cosmic Patrol
Cosmic Patrol is a 1930’s-1960’s pulp science fiction RPG, where you blast off into space in a rocket and have Pulpish adventures.  Comes with the quick start rules, a four part adventure and three pre-made characters to play with.  The tidy booklet carries its weight by the amount of information crammed inside.  Having read through the rules over a coffee, its definately the easiest, quickest set of rules I was given today for free.  I will be playing this sooner than later.

The Godsfall
Wow, was a setting to start it off.  The story this particular RPG is based around is fantastic, you play survivors of a God falling to your planet and nearly destroying it through an ecological disaster.  The game mechanics seem a little clumsy, but with six pre-made characters to choose from and a well written adventure to play, the setting alone makes this title well worth playing.

Mage: The Ascension (20th Anniversay Edition)
The title alone makes it worth your time as well.  Its a 46 page handout that is more like a rulesbook than a set of quickstart rules.  It comes with a blank character sheet, 5 premade characters and a ton of adventure hooks.  It has the basic set of character generation (so you COULD make your own characters from this book alone) information and a lot of reading material crammed into its pages.  Glad I managed to get hold of one of these.

Shadowrun & Battletech Quickstart Rules
Catalyst have combined the two game settings into one 50+ page booklet.  It comes with a smothering of pre-made characters, equipment and settings with which to start playing.  The Shadowrun scenario “Spoiled Rotten” is a nine page adventure with hooks, maps and NPC details, its amazing.  You also have four pre-made, common, archetypes to play from the Shadowrun world and a GM screen/cheat sheet to use.  The Battletech scenario “Character Assassination” is only a four page adventure, with four premade characters to choose from, and a GM screen.  Battletech Quickstart is more centred around the rules of the system.  Out of the two Shadowrun gets the most focus, but both games are well worth your time.  This is my prize book of the day.

Outcome
Overall I was happy with Free RPG day, but I feel that retailers could do with spending more time on the day itself.  Considering that Free Comic Book Day is pretty huge in the UK, Free RPG day could only be a few steps behind if shops spent more time on the day itself.  I think that, if I hadn’t have managed to get hold of the books/modules I wanted to pick up, this article wouldn’t have had a happy ending.  Luckily I managed to get my copy of the Shadowrun QuickStart rules and I was happy to find a copy of The Godsfall (Only two copies in Manchester!).  Lets hope, next year, someone switches on and makes it a day that’s hard to forget.