Now in its fourth year, Stoke-Con-Trent is a relative newcomer to the Convention scene.  Over the past four years though, they have gone on to attract some big name guests.  This years line up included Patricia Tallman, Garret Wang and Claudia Christian but to name a few.

A small team from Geek Pride went along to this years Stoke-Con-Trent to give you, our readers, a quick run down of the event itself. 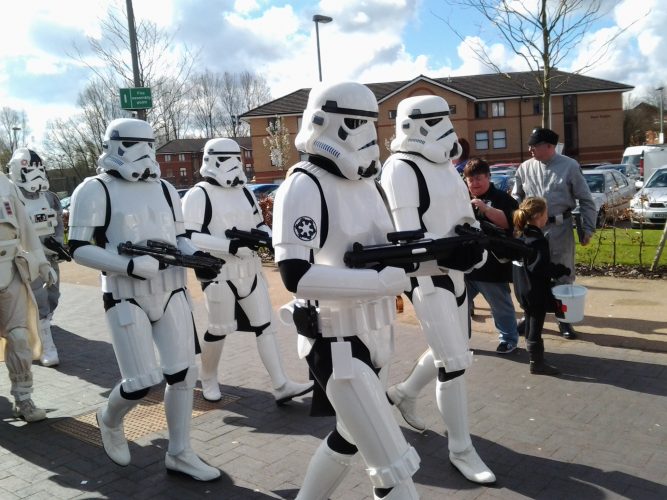 Set at Stoke University, this is a fairly small convention spread over two buildings. The main convention hall housed the majority of the stalls, with celebrity guests ringing the outside of the hall, and more in the cafe area of the second building.

At times I found the main hall to be rather cramped and it did prove difficult to more around. I wasn’t sure if this was back handed compliment to the popularity of the event but I guess it did give it that ‘close knit’ feel.

Minor gripe aside, the stallholders were all very friendly and, in a rarity for me, I have to admit that the prices they were charging for merchandise were actually very reasonable. 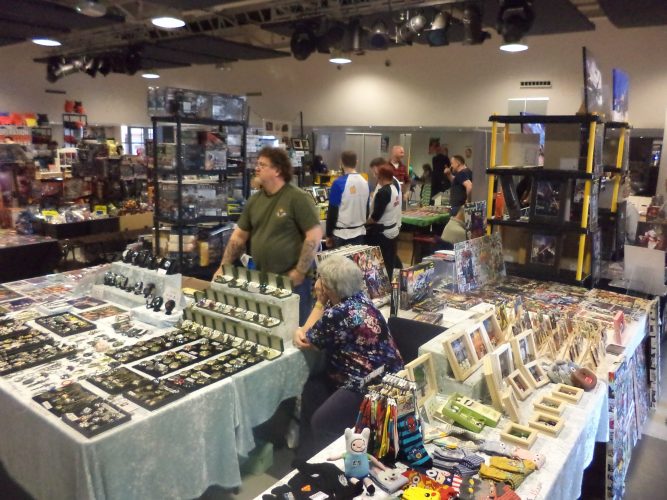 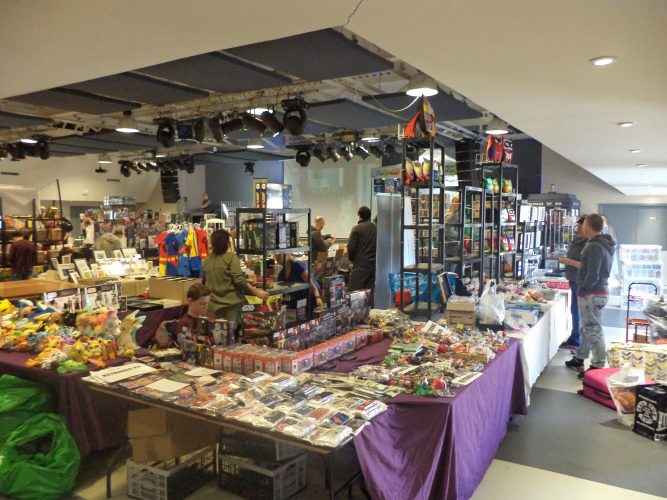 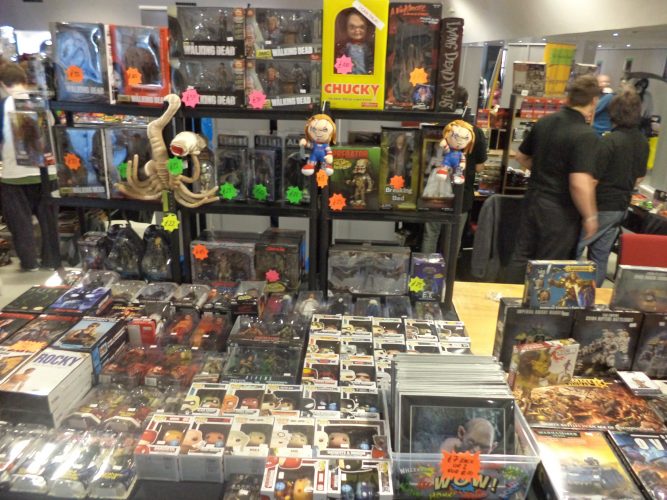 The celebrity guests were sat at wooden trestle tables with a printout of their name / head shot behind them along with what appeared to be a quickly written up notice in Sharpie detailing what they had been in.  To me, personally, this seemed to lack professionalism.  However, for a small convention in only its fourth year, things like this can easily be overlooked in the planning stages of the event itself.

There were events advertised in the days programme, but these were very hard to find due to poor signposting and indeed many events did not keep to schedule.  Again though, in balance, this does happen from time to time and even with the best will in the world, schedules can become mixed up; so not a huge issue

At the rear of the main hall there was a covered over patio area.  This was a godsend as the main hall, as already mentioned, got very cramped and as such people spilled out for a breather and to rest their ears from the constant, and at times, deafening PA announcements that were going on. 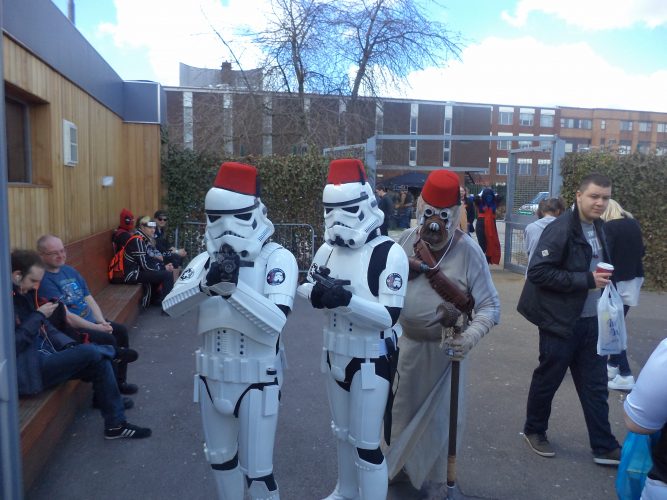 Stormtroopers in Fez’s. Nothing more to say really.

The second building was where the universities Cafe area was and within, directly next to the open plan Cafe (serving hot food) were more celebrity guest tables, several more stallholders and some comic artists.

In a room upstairs  there were several stalls set up by students of the University who are studying art there, which I thought was a nice touch and giving back to the university that was providing the Con.

I have to say that from the point of view of this reviewer, the decision to place celebrity guests in an out building, right next to an open plan Cafe / eatery was perhaps a mistake.  Obviously space is at a premium at an event held in such a location, but still, it was rather bad form. 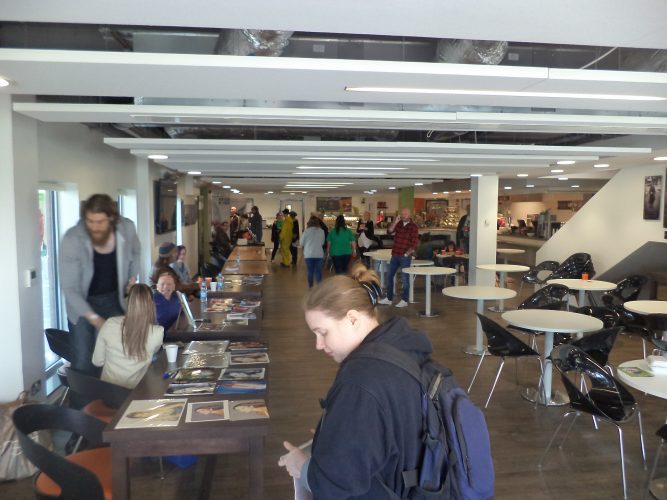 This being said all of the guests and stallholders that we spoke to were very friendly and had nothing but time for us to interview them for upcoming articles.  Likewise, the volunteer Convention Steward team were also great and full of enthusiasm.  Again, that said , the lack of any formally organised Q&A sessions (except a hastily put together one with Garrett Wang) left much to be desired.

The Eatery and Bar on site were very reasonably priced; a stark contrast to some conventions that bump their prices up to a premium and there was free parking.  This is a big plus especially in this day and age where family budgets are tight.

Overall, I would say Stoke Con Trent was a success and people mostly enjoyed themselves. Some of the issues  regarding cramped quarters and disorganisation were mentioned, but there was nothing but praise for the friendliness of the guests and stallholders.

I cant help but think that maybe it has outgrown its current venue and that moving to a larger site, or perhaps even using more of the University grounds, may be better in the long term; just my humble opinion though.

All in all a small and still young Con that, with some more space, a bit more forward planning and continued competitive prices, could really hold its own in this Con packed country of ours.

A good day out for Geeks and their families 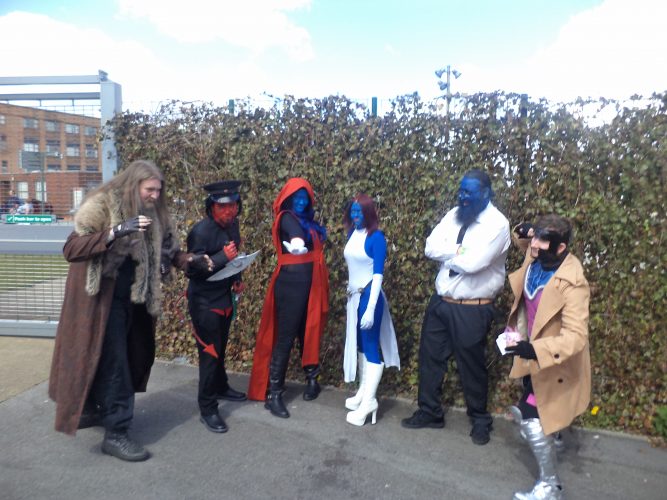 Cosplayers out in force! (Courtesy of Midland Cosplayers)

By day, Chris owns a private security company and is terrified of his pet Shih Tzu. By night, he plays games and reads comics whilst keeping one eye on his evil pet Shih Tzu at all times.
You might also like
Comic conventionsconvention cultureconventions