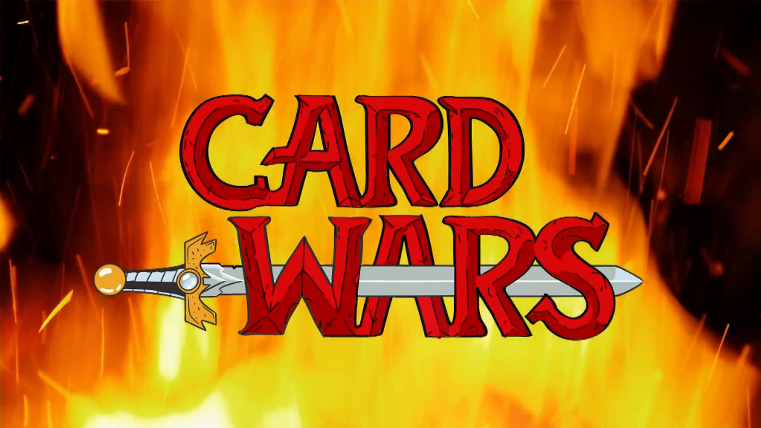 Hot on the heels of Mike Orvis blowing our mind via his theory on the why OOO is Ooo, some mathematical news has floated it’s way to the top of the tabletop gaming pond. Publisher Cryptozoic (famous for the DC Deckbuilder amongst other games) have announced the release of a Trading Card Game based on Card Wars, the card game loved by Jake in the Adventure Time episode of the same name.

I do not play such games … with Jake.

Details are sketchy at the moment, with this blurb on boardgamegeek.com being the only source of real information

“Card Wars is the most epic card game ever found in the Land of Ooo, or anywhere for that matter! In the Adventure Time episode “Card Wars”, Jake begs Finn to play his favorite trading card game. Finn accepts, despite warnings from Beemo on how very competitive Jake can be while playing the game. Finn and Jake battle against each other to decide who will be the Dweeb and who will be the Cool Guy.

Each turn, a player has two Action Points to spend on Creatures, Spells, and Locations, and cards cost between 0 and 2 Action Points to play. When you summon a Creature, you choose which lane you want to place it in; some Creatures have FLOOP abilities that allow you to use their special abilities. When you attack with a Creature down a lane, you might find an opposing Creature, or you might get to deal your damage straight to your opponent’s Hit Points. Reduce your opponent’s Hit Points from 25 to 0 and you’re the Cool Guy (and you win the game)!

Each Starter Set has a pair of different forty-card decks and is ready to play right out of the box. Mix the decks together to come up with your own righteous combos!

Card Wars is a collectible trading card style game. Be on the lookout for future add-on packs to add to your collection!”

A quick scoot around the Cryptozoic websites reveealed very little else, apart for a company comment along the lines of “Things will be revealed soon!”, with some speculation about news at the end of January.

I just hope Cryptozoic can pull this off, since their titles have a reputation of being a bit hit-and-miss in the quality department. But let me tell you, I can’t wait to Floop the Pig!