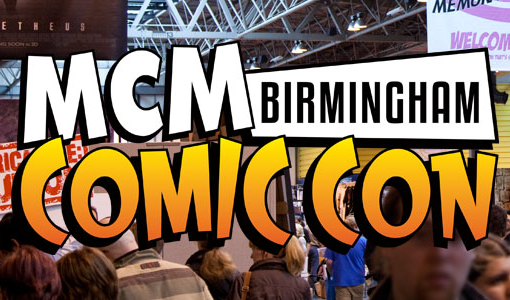 Hot on the heels of London Super Comic Con this year, was MCM Comic Con’s return to Birmingham the following weekend. I’m not usually one for doing two conventions so close to each other, but I have to say the Birmingham layout was something MCM definitely nailed on the head.

I’m used to London, to swathes of people and next to no breathing room. It’s one of those places that’s generally so packed you walk a couple of feet and find yourself wanting to throttle someone – but thankfully Birmingham was a very nice change of pace and bestowed upon us oodles of glorious room! If anything I have to confess to feeling it was a little sparsely populated in certain places, but I’m not going to knock it – because the atmosphere as ever was definitely pleasant.

For me, the main draw of MCM is usually the cosplay. I’m terrible at it, but that doesn’t stop me from being utterly awestruck by the costumes on show to the world. There’s an art to bringing a character to life and the masses at Birmingham did exactly that. From resurrecting childhood classics like the Swan Princess through to reliving the thrills and spills of the Walking Dead, the cosplay scene was something truly beautiful to behold. (And alright, yes maybe I did fangirl a little bit too much in certain cases, but trust me- if you were there, you would’ve done it too!)

For the first time, I actually managed to get a good look at the exhibitors this time too, which was a surprising luxury I’m going to have to hope to repeat in future. My personal favourites this time included the chaps behind Telikos Protocol (which is literally the most jaw droppingly stunning comic ever) and the David & Goliath stand, because I live for terrible puns – and their stuff is adorable so it’s a win-win! The Street Fighter stand also warrants an honourable mention, although I did get wiped the floor with by Chun Li. Clearly I need them to exhibit again so I can get more practice in!

Aside from this, I did also get to catch a round or two of Robot Wars which left me singing Eye of the Tiger for far longer than was entirely appropriate, and of course to witness the stunning 200 strong parade of Star Wars characters who were marking the UK Garrison’s 15th anniversary.

Birmingham MCM is definitely one of my favourite events this year and with special guests like Warwick Davies, Colm Meany and the Walking Dead’s Laurie Holden in attendance, it’s easy to see why. It was a laid back con, full of like-minded, enthusiastic people and for me that’s kind of what a con should be.

Which is why I’ll definitely be back when it returns to the NEC in November – hopefully I’ll see you there!