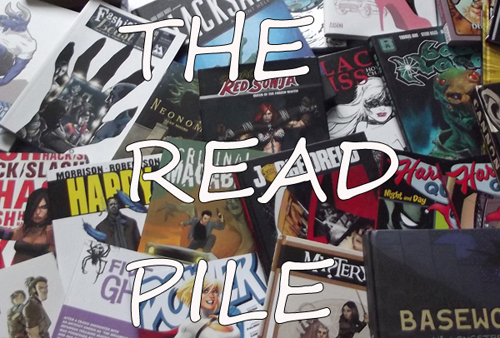 Welcome to the latest edition of The Read Pile the GP comics blog where we’ll be talking about what we’ve been reading recently, what was good and what was bad and other randomness. Just like before other contributions are colour coded, whilst mine are black.

Main one for me is still just plowing through Batman and Robin Eternal (DC,, Scott Snyder, James Tynion IV, Tony S. Daniel, et al) which continues to sway between really dragging its heels and actually doing some cool stuff. Other than that, issue 5 of I hate fairyland (Image), which is Skottie Young’s , the guy who does a load of the variant covers for Marvel, own project that he writes and draws. It’s kind of weird because the series isn’t technically over but issue five ended the first arc and I think the comic is now taking a break or something. I believe that the second arc isn’t starting straight away which is unusual. Its mostly just irritating though because the series is excellent, being as it is about a girl who has been trapped in fairyland for thirty years but she still looks about eight. She’s murderous and foul mouthed and the art is rather brilliantly done around all that. Also the latest of American Alien (issue 4? I think) which brought Batman into affairs in a pretty cool way and Dick Grayson even more so. Been pretty impressed with the series as a whole because it’s essentially Max Landis putting his money where his mouth is regarding his passion for Superman. He’s taken a good approach as well. Each issue is its own self contained story from different points across Clark’s life. The fact that it focuses on Clark as Clark more than as constantly superman improves it as well. 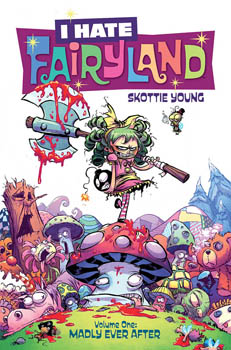 I’ve heard good things about I hate Fairyland but I’ve yet to actually see it in any of the shops I go in.

I picked up The Discipline (Image, Peter Milligan, Leandro Fernandez, Cris Peter, Simon Bowland) which is the kind of thing that a certain website is probably writing an angry think piece about given that it features a girl getting involved with what seems to be a time travelling alien sex cult at war with other aliens.

I Hate Fairyland is great, I think particularly because young is serving as both writer and artist so you get a very cohesive vision on the page. Very funny series. I wouldn’t know about it in shops, I get my stuff online. The Discipline certainly sounds interesting. Is it all that weird stuff in a good way or a bad one?

Very much a good way, I’m interested to see where it goes. I’ve also been reading the new Serpieri collection books (Lo Scarabeo, Paolo Eleuteri Serpieri) I think Druuna is notorious because it’s full of brutal violence, weirdness and lots of sex in a grim dystopian world, but Serpieri’s art is amazing throughout and you can see how it got better over time because the books took years to finish. The new books are oversized and each feature two of the books published via Heavy Metal in the 90’s. I will say they were bloody hard to get though, I couldn’t find the English editions anywhere on the internet, luckily my shop was able to get them. From what I’ve gathered I’m not the only one who’s had trouble getting them, which is weird for something that was in Previews. 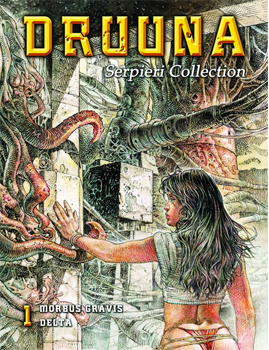 alwaysstruck me as a good concept executed increasingly poorly since the first series by Garth Ennis and Jacen Burrows, which was actually good, so I haven’t read Badlands since the first few issues but this was actually pretty good, if disturbing horror comics are your thing ofcourse.

My local Forbidden Planet has been selling off a load of Titan-published DC trades for hella cheap, so I picked up Batman: Fortunate Son (DC, Gerard Jones, Gene Ha) (and a whole bunch of others, but this is the best one). So it’s basically Batman vs. rock n roll, and Robin (Dick Grayson Robin! It’s so old!) is in his teenage rebellion faze and SPOILER ALERT the bad guy is Elvis’ twin brother and apparently Sid Vicious was obsessed with Bruce Wayne and he could have stopped Sid killing Nancy but didn’t and now he hates angry music. The plot is essentially a tortured musician gets manipulated into causing countrywide chaos, and Batman takes Robin on tour after this guy to show him how evil music is, and it turns out the only time Batman ever listened to rock and roll was the night his parents died. It’s a whole thing. And the weirdest part is that it’s actually really good. SO GOOD.

Really? That sounds pretty awful. I think I mentioned before I haven’t read any new Batman for a while, like what the hell was going on with that mecha Batman bullshit?? 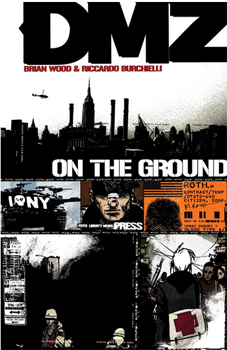 I Picked up volume 2 of Superman: Earth One (DC, Shane Davis, Ardian Syaf) and despite not having that much interest in the character, it is damn good (J.M Straczynski’s writing helps a lot).

Rereading Brian Wood & Riccardo Burchielli’s DMZ at the moment. It is almost prescient in its portrayal of America, especially with the militia in Oregon.

If you like Straczynski, Superman: Grounded is fucking brilliant.

Will give Grounded a try. Seen it a few times, but never picked it up.

DMZ is Vertigo isn’t it? I’ve read a lot Vertigo stuff but not that.

I read The Last Days of American Crime which is a really good neo noir with a bit of near future sci-fi thrown in, it’s really good, I expect a 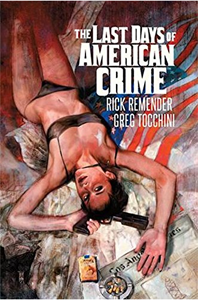 bad film adaptation at some point, it’s wriiten by Rick Remender, the art is by Greg Tocchini, who is doing Low I think, and it has amazing covers by Alex Maleev.

DMZ was by Vertigo and is a great story about the reporters and non-combatants in America’s second civil war.

I think there’s DMZ, 100 Bullets and maybe something else I haven’t read. I’m working my way through Scalped now.

Curious if anybody is reading any of the new Vertigo stuff since I haven’t really checked any of it out and Vertigo seems to very much survive on it’s older titles I think. Clean Room by Gail Simone and Jon Davis Hunt is supposed to be good but I have no idea what it’s about.

YOU HAD ME AT NEO NOIR, AND KEPT ME FOREVER AT NEAR FUTURE SCI-FI. Rick Remender makes me so ambivalent though. Like, Deadly Class? Near-literal genius. Uncanny Avengers? Burn it to the ground.

It’s so good and is brilliantly paced too.

I was looking at Deadly Class the other day, I think the only thing that stopped me picking it up was I am almost definitely going to get 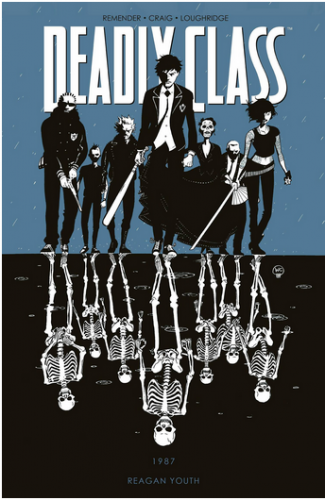 crushed to death by an unstable tower of graphic novels falling on me in my sleep.

Am I wrong for wanting to read Avengers Arena. For Darkhawk?

I don’t even know what that is,ha,ha. I have not been keeping up with Marvel or DC really.

That the same Runaways that I read what seems like forever ago with Lucy in the Sky?

AND GERT!!! Gert was my favorite

I’m not sure how much I read of it, I also now realise it was Brian K Vaughan which explains why it was so good, well what I read was god knows what other writers did to it.

Runaways was great. Read the first two volumes in the series. All of the characters were incredibly well-rounded, although my favourite would have to be Molly.

I think it being a Marvel comic kind of ruined it though because it wasn’t creator owned and got assimilated into the Marvel Universe.

The whole Runaways series was pretty consistent… There were some gripes with how they (well, specifically Chase) was handled in 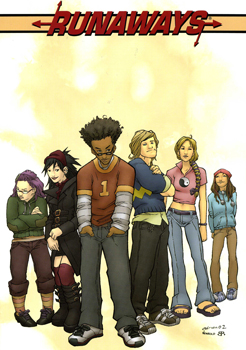 Arena, and I wasn’t a fan of grown-up evil Molly in X-Men, but that was mind control so that’s something.

I know Vaughan only wrote the first 24 issues or so. I guess I’m more used to finite narratives that have a beginning, a middle and an end, whereas Marvel utterly ignores that approach entirely and just recycles things forever and makes everything narratively redundant.

They team up with Avengers Academy and Young Avengers at points, which were good. I think when Vaughn left they brought in Xavin, who was a shapeshifting skrull who did some interesting things with sexual identity, and Clara, who was a Victorian-era nine-year-old who was married to a grown man, and saw nothing really wrong with that but was disgusted by Karolina and Xavin being gay. It was pretty much what you’d expect of someone from that era, rather than having people from 200 years ago with the social morals of a modern-day liberal.

Contributors corner for this edition – Callum, Laura, Peter and myself

Andy Haigh started writing to counteract the brain atrophying effects of Retail Hell, now it's an addiction. Andy is an unrepentant sequential art absorbist and comics are one of his passions. Other interests include Film, Music, Science Fiction and Horror novels and quality TV like Game of Thrones. He can talk about these at great length if only someone would listen. He lives a somewhat hermit like life in The Shire, spends too much time on social media and is still waiting to go on an adventure.
More Goodness
American AlienAvatar PressBrian K Vaughan