I always have the same reaction whenever I hear that a novel has been self-published. It’s not even a proper grimace, it’s more like my smile just slides off the bottom left corner of my face. Seriously, grab a mirror, try and pull that face, and then you’ll know how truly ridiculous I looked when my friend said “Hey, you should totally read these books! The author self-published!”

It’s not that there’s anything wrong with self-publishing, far from it, it’s just that– no, wait, you know what? My thoughts on self-publishing will probably take up their own post. Let’s move on.

What with all my apprehension about self-published novels, I was both surprised and relieved to find that Jared R. Lopatin’s Star Child Trilogy doesn’t suck. 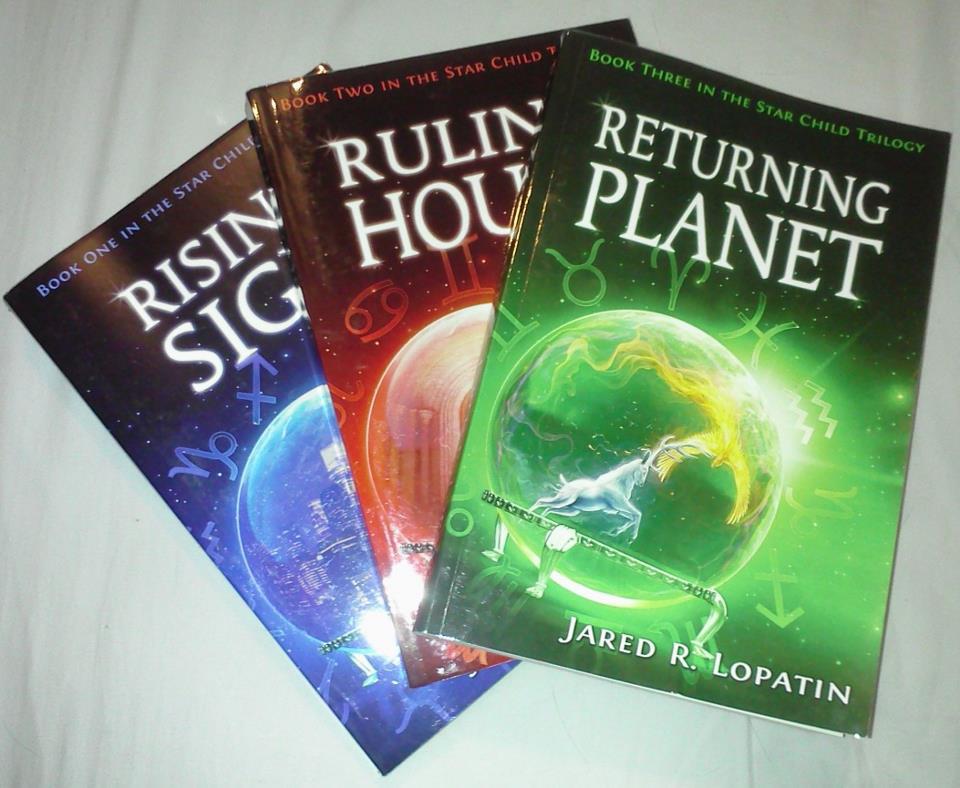 The first book, Rising Sign, starts off with a fairly standard “normal guy sucked into mystical conspiracy that will change his life forever” plot: twelve people are born as the complete embodiments of the twelve star signs, and must find and protect the mysterious Star Child, who possesses untold amounts of power and will change the world. As far as fantasy plots go, it’s pretty standard, but Lopatin’s attention to detail adds an extra sparkle that keeps it interesting, and the interactions between the characters provide a touchstone of realism amongst the fantasy.  This first book mainly concerns itself with gathering the core twelve into one manageable group with exposition by the boatload, which does cause it to sag in the middle somewhat as the “track down new person/convince them of the prophecy/demonstrate their special powers” cycle continues ten more times; but again, the book is saved by the details- accurate enough to satisfy the astrology buffs, but not too impenetrable for those who have never so much as glanced at the Mystic Meg column.

All in all, Rising Sign feels like backstory for the second two volumes- it’s a decent enough read, with a solid beginning and a jaw-dropping final page, but you could probably skip on ahead to the next book and not miss much.  Then again, C.S. Lewis started Narnia with The Magician’s Nephew, and it never did him any harm, so fair play to the author for the extensive backstory.

The second book, Ruling House, is where it really kicks off.  Several years after the first book, the Star Child is learning to use her powers, but gets ousted from her body by an invisible and sinister presence.  It’s a drastic change from the formulaic nature of the first book, and manages to provide the twelve adults (powered up in the finale of the previous book to God Mode levels) with a genuine challenge, but without resorting to an obvious nerfing.  The shift in protagonist from a man in his early twenties to a young girl puts this series comfortably in YA territory, and the author seems to find his voice and get a bit more confident in the storytelling.  The attention to detail -which I’d feared would be lost with a less expository plot- is, if anything, stronger, particularly in the scenes on the Astral Plane.

The third book, Returning Planet, opens mid-fight and doesn’t let up from there.  Unfortunately the plot is not one I can reveal without ruining breathtaking twists of the previous two books, so I’ll just say it’s very, very good.  And the wordcraft, as I mentioned previously, continues to be good.  However, I do feel that the author could have written it with some consideration for those of us who are reviewing the trilogy as a whole and don’t want to spoil twists and have to write a paragraph full of blah so as not to ruin the ending.  This is possibly the most bland paragraph I have ever written, and I can’t delete it because then people would think I forgot to review the last book.  If you take one thing away from this paragraph, let it be that Returning Planet is a great book.  Let the rest of this paragraph wash over you like muddy water at the world’s most disappointing beach.

Onto a new, shinier, better paragraph: the trilogy as a whole has a snuggly quality to it.  Personally I’d find it more satisfying if the first book was condensed into an extended prologue, and all three books were printed as one, but then I think that about 96% of all trilogies I read.  I like big books, and I cannot lie.  The magic and other planes of reality are comparable to Garth Nix’s Old Kingdom series, and there’s enough research behind the astrology that, for those of us who read our horoscopes every day and pretend not to believe them, the events feel tantalisingly possible.

Basically, this is the literary equivalent of a cup of cocoa and a soft blanket on a rainy day. And who doesn’t love that?

Oh, and you can buy it here.

At the time of character creation, Laura Maier made the mistake of putting all her points in charm. While this was probably an unwise decision, it's served her well so far. Her power animal is the platypus.
More Goodness
Fantasy