by Peter Ray Allison on 24/04/2015
Details
PublishersFiction
By

A great selection of stories, with a strong cohesive throughout.

Like any collection, there are always going to be some short stories that will not appeal to you, but those will be out-weighed by the ones that do.

After the Fall is an excellent collection of science fiction stories, with some horror and fantasy tales thrown in for good measure. Alex Davis has ruthlessly ensured that the stories adhere to the core themes, making for an appreciably strong collection of tales that explore different visions of post-apocalyptic society.

I am generally ambivalent towards short story collections. They tend to consist of random stories that the authors had lying around, with little relation to the title and none to each other. Thankfully, this was not the case with After the Fall.

The editor Alex Davis has carefully chosen each of the stories collected within After the Fall, based upon how appropriate they to the title and the overall theme. As you may have guessed, this is a collection of post-apocalyptic tales, specifically those where the fall of civilisation was caused by technology. Whilst the genre of these tales was broadly science-fiction, there were others that encompassed the horror and fantasy genres as well.

Nonetheless, the chosen stories are as diverse as they are enjoyable. Some are set during the collapse of civilisation, whilst others set long after; exploring the “new” world. Surprisingly, not all of them are serious: some – such as “As They Get Warmer They Give A Little” by Caren Gussof – have a far more humorous take on the idea.

“Instrumentum” by Adam Roberts was a fantastic exploration of religion and control, whilst “Hell Freezes Over” is a brutal story set in a new ice age. Others, such as “Patience” by Simon Sylvester are atmospheric vignettes, which evoke the feeling of isolation amidst the ruins of civilisation’s fall.

Some were not as accessible as I would like them to be, especially those that invented a devolved dialect of the English language (I struggled to read these).

Personally, I do not enjoy “Then and Now” by Delphine Boswell, as it seemingly delighted in the idea of a world freed from technology (its pervasiveness and lack of privacy) whilst failing to consider areas in which technology improves our lives (e.g. medical care and communications). For me, these technophobic undertones felt blinkered and trite. 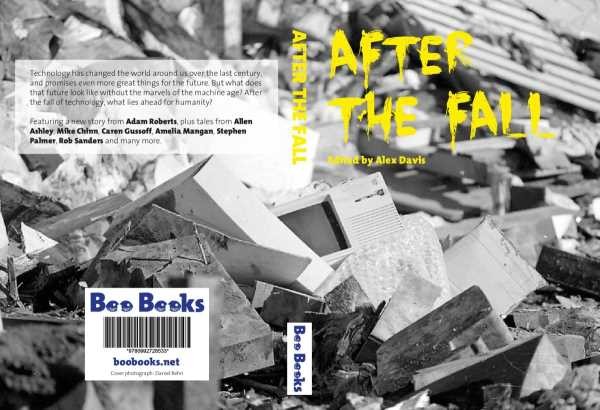 Science Fiction: the final frontier. These are the articles of the freelance journalist Peter Ray Allison. His continuing mission: to explore strange new realms of fiction, to seek out new genres and new visions of the future, to boldly geek where no one has geeked before.
More Goodness
collectiondystopiascience fiction