Alan Moore, the bearded demi-god wizard of Northampton and critically acclaimed writer of far too many things to list here, is set to return 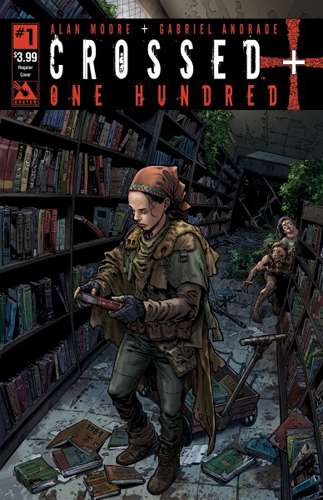 The limited series called “Crossed: + One Hundred” will be the latest incarnation of Avatar’s hit horror series which has become notorious for its vision of a nightmarish world that makes The Walking Dead look positively cheery.  This time things will have a twist with the series being set one hundred years from the original outbreak of the Crossed.

The idea for the limited series spun out from conversations between Moore and creator of Crossed Garth Ennis about the possible future for humanity in the world of the Crossed. As a result Moore has created a new history for the world exploring what happens to the Crossed and humanity.

The story will focus on an enclave of survivors most of which have never seen an infected member of the Crossed in a world where nature has reclaimed the cities formerly inhabited by man. Future Taylor, an archivist with an interest 20th and 21st century science fiction who heads up a struggling team of reclamation workers, is one of the main characters of the series. When the team stumble upon a small group of the Crossed the team are worried about the violent nature of the infected and the implications they have on their future survival. As well as  writing the self contained story, Moore has also designed the covers for the series, with numerous variants tying into the themes of the story and showing glimpses into life in this future world.

Alan Moore had this to say on writing Crossed + One Hundred,

What kind of human future would there be at all? Would humans all be gone? Once I started thinking about this, and I checked all this with Garth, and he thought that it was logical, it seems pretty sound. So, that’s been part of the thrill of it. I think people think of Crossed as a horror story, and I can see why. It is extremely horrible. But actually I’ve always had my problems with genre, and I am coming to the conclusion that genre has really only ever been a convenience.

Ennis had this to say about Moore writing Crossed,

So it turns out Jimi Hendrix wants to play in my band. He wants to sing my songs. I don’t usually worry about vindication, but Alan is probably the one person whose opinion would be enough to change my mind about what I do.

He’s the most talented individual the medium’s ever seen or ever will; that he’s writing Crossed  means everything to me.

For me to work with Mr. Moore on this new project has been much more of a gift than a challenge.  I feel a very strong connection to the world behind the story, as all the references, books, movies, music and conceptual art that have accompanied me throughout my life, are being exploited here. I have had an amazing amount of freedom, both in the creation of the look of these characters and in the formulation of the new world.

The intelligent, clear and detailed text of Mr. Moore gave me a solid base to illustrate and experience the universe we’re creating.  I am very excited about this work and what will be published is the result of days of dedicated and intensive research and hard work

You don’t have to enjoy horrific things to find value in horror fiction. And you don’t have to like Crossed to know Alan’s take on it will be very, very interesting indeed

Crossed: + One Hundred is set to appear in December.

Andy Haigh started writing to counteract the brain atrophying effects of Retail Hell, now it's an addiction. Andy is an unrepentant sequential art absorbist and comics are one of his passions. Other interests include Film, Music, Science Fiction and Horror novels and quality TV like Game of Thrones. He can talk about these at great length if only someone would listen. He lives a somewhat hermit like life in The Shire, spends too much time on social media and is still waiting to go on an adventure.
More Goodness
Alan MooreAvatar Presscomics