previous
A TRULY HELLISH EXPERIENCE! - A Look Back At A Fighting Fantasy Classic
random
next
MANCHESTER MCM 2015 - An Overview
Books and Comics
1 like 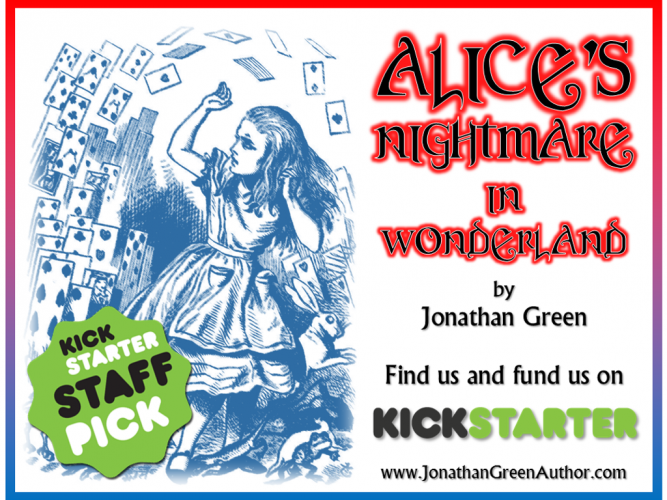 Read Lewis Carroll’s Alice stories? Like Steampunk? Enjoyed Fighting Fantasy gamebooks? Then this kickstarter just might be for you…

If you’ve ever wondered what would have happened if Alice hadn’t drunk from the bottle labelled ‘Drink Me’, or if she hadn’t joined the Mad Hatter for tea, Jonathon Green invites you to find out. In Alice’s Nightmare in Wonderland, rather than following the story of Alice, you will be able to guide Alice through the fluctuating dream world, deciding which route she should take, which perils to risk, and which of Wonderland’s strange denizens to fight.

Set several years after Alice Through the Looking Glass, Alice will once again find herself back in Wonderland to save the realm from the increasingly deranged Queen of Hearts. But all will not be as it first appears in Alice’s Nightmare in Wonderland, and Alice will soon be battling to save herself from the nightmare that is rapidly overtaking Wonderland…

Thanks to the flexible rules system that will be developed especially for this gamebook Alice’s Nightmare in Wonderland can be played in three different ways. You can play through the adventure as you would in traditional gamebooks, by rolling dice to determine the outcome of battles and events. You can also replace the dice for a more apt deck of playing cards. Or you can simply enjoy reading through the story, however success will still not be definite.

Alice will have five different attributes to keep track of during the adventure – Agility, Logic, Insanity, Combat and Endurance (forming the acronym of A.L.I.C.E.). Rather than being determined randomly, readers will decide where our heroine’s strengths and weaknesses should lie.

Alice’s Nightmare in Wonderland will be illustrated by Kev Crossley, an artist best known for providing the gruesome images of zombies in Ian Livingstone’s 30th anniversary Fighting Fantasy gamebook Blood of the Zombies.

Each book will contain an introduction, all the rules you need to play the game, the adventure itself, a host of illustrations (depending on how successful the Kickstarter is), and Adventure Sheets for recording your stats through the story.

The deluxe signed collector’s edition will also include artists’ sketches, designer’s notes, and a brief history of Lewis Carroll’s Alice, not to mention decorative endpapers and a ribbon bookmark.

For more information, as well as how to back this gamebook, visit Alice’ Nightmare in Wonderland on Kickstarter. 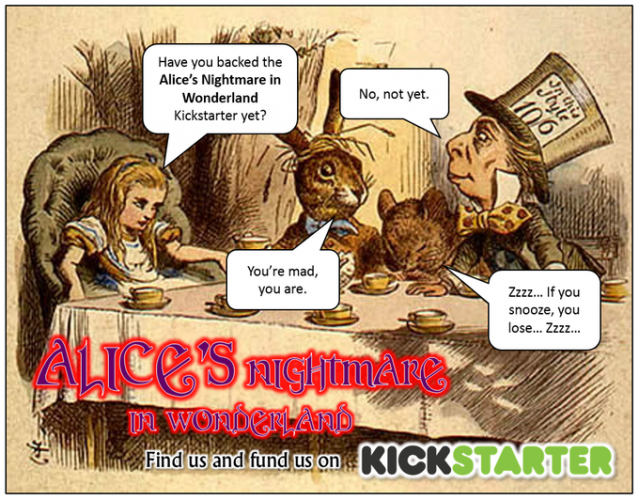 Science Fiction: the final frontier. These are the articles of the freelance journalist Peter Ray Allison. His continuing mission: to explore strange new realms of fiction, to seek out new genres and new visions of the future, to boldly geek where no one has geeked before.
More Goodness
AliceAlice in WonderlandFantasy