If you're not a fan of the Whedonverse then this will be lost on you.

With the soul of Giles now complete, Faith, Spike and Alasdair must find a suitable vessel, the only problem is the only person who knew that part of the plan was Angel, who is currently incapacitated due to playing host to the soul of Giles, his own soul and the Demon Angelus.

Whilst the Buffy comic seems to stumble along in a rather hit and miss manner, Faith and Angel continues to impress and this might well be the best issue yet.

Last issues ending left a lot of questions with it’s cliff hanger ending of Angel, in the fetal position unable to handle being host to three beings. Angel is still out of commission, so it’s down to Spike and Faith to save the day, and it’s brilliant.

Christos Gage shows he knows these characters and more than that gets the tone dead on. 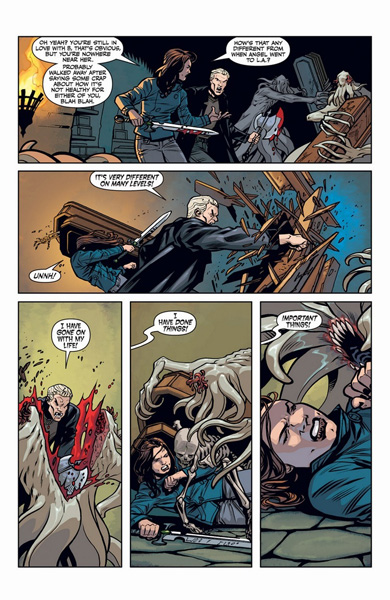 Faith and Spike work out their issues.

Spike is all snarky attitude and wit and his dialogue is genuinely funny, the numerous scenes between him and Faith crackle with chemistry. Faith actually gets to show how much she’s grown and matured, as Spike is making wise cracks about how she has chains in her basement when they decide to shackle Angel up for everyone’s safety.

There’s also a fight with some monsters but rather than being a perfunctory sequence ticking a box, it actually fits into the story adding to the dynamic of Spike and Faith. Especially when Faith says that Spike and Angel have a ‘bromance’ going on, due to both their experiences with Buffy, resulting in Spike completely denying this whilst cathartically hacking monsters into bloody chunks. 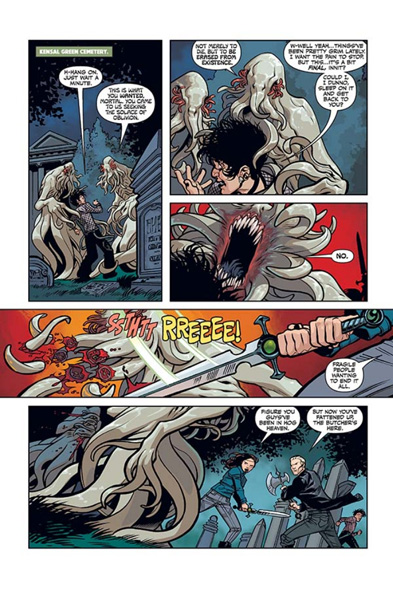 Spike and Faith take on some demons.

Not only does it work well as action sequence but it also seems like it could be a scene from either of the Buffy or Angel shows.

A maudlin Spike confessing all to Angel and ranting at him in the basement after being rejected by Giles’s Great Aunts really shows why these characters endure after their parent TV shows finished.

Rebekah Isaacs character art is great too, not just in capturing the characters likenesses but in the expressions which are key to really selling the characters and the situations they are in. The other details, like the backgrounds and the monsters all add to why this is such a good read.

Those last three pages are killer too.

Andy Haigh started writing to counteract the brain atrophying effects of Retail Hell, now it's an addiction. Andy is an unrepentant sequential art absorbist and comics are one of his passions. Other interests include Film, Music, Science Fiction and Horror novels and quality TV like Game of Thrones. He can talk about these at great length if only someone would listen. He lives a somewhat hermit like life in The Shire, spends too much time on social media and is still waiting to go on an adventure.
More Goodness
AngelBuffyChristos Gage