previous
Hiro Arikawa - The Travelling Cat Chronicles...
random
next
Rivers of London - The Fey and the Furious
Books and Comics
0 likes

Simply amazing artwork that evokes the inhospitable and alien environments.

The size can make this a cumbersome read, but any smaller would have been detrimental to the art.

Anyone with an appreciation for the Cthulhu mythos would not be disappointed with this fantastic artbook.

The story details the events of a disastrous expedition to the Antarctic continent in September 1930, and what was found there by a group of explorers led by the narrator, Dr. William Dyer of Miskatonic University. Throughout the story, Dyer details a series of previously untold events in the hope of deterring another group of explorers who wish to return to the continent.

In this new edition of Lovecraft’s classic novella, François Baranger has provided a series of illustrations to accompany the story.  However, make no mistake, this is a full-sized artbook and not simply a graphic novel.

Here, the art takes centre stage, with Baranger bringing Philip’s work to life.  The accompanying text comes second and is solely there to act as a structure.  In many ways, the story is so well known, that the text is dispensable.  Explorers go to the Antarctic, find an ancient city and things go horribly wrong, with tentacles.

The text is from Lovecraft’s original story, without any revisions or omissions for Lovecraft’s racism.  This not excused, but there is an afterword that explains the publisher’s reasons of wishing to preserve such a classic tale.

The book is huge, coming in at 262mm x 350mm.  The size of the book is justifiable, as the attention to detail is exquisite.  If this book were to be any smaller, then there would a significant loss of details, which would be to its detriment. 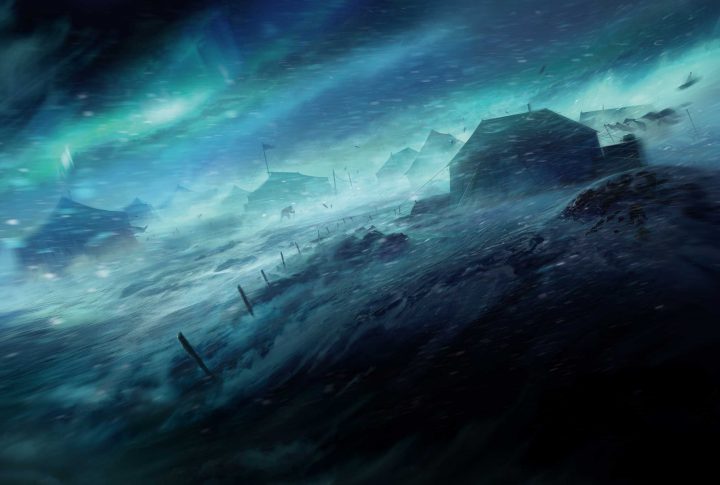 What stands out here, more than anything else, is Baranger’s clear expression of the sheer scale of the vistas at the Mountains of Madness.  Diminutive people, almost mere specks, are contrasted with the colossal structures, whilst mountains seem like hillocks compared to the vast alien cities.  This scale and lack of human perspective express the sheer alienation of the setting and architecture.

This focus shifts when we are inside with people from the story.  Here, people dominate the perspective, when we are viewing at the same level as the people, they are more relatable than when shown in the inhuman vistas.

There is also a fantastic use of colour in Baranger’s paintings.  The cold exteriors are predominantly the white and blue of snow flurries and icicles, evoking a subconscious chill.  This is balanced by the warm yellows and browns of the human interiors – usually libraries and cabins – that feel safe.

These shifts in perspectives and colour are combined to reinforce the underlying theme of Lovecraft’s work; that we do not belong in such an alien and inhospitable environment.

Baranger does not shy away the body horror found in At the Mountains of Madness and such images are profoundly detailed and yet obfuscated just enough to never fully show the grotesquery and descend into being gratuitous.

It should be pointed out this is not the complete story, but only the first of two volumes.  Volume 1 concludes just as the expedition encounters the entrance to the alien city, acting as the perfect cliff-hanger to conclude the first volume.

Finally, accompany this artbook is a foreword by French novelist Maxime Chattam exploring the enduring fascination with Lovecraft and At the Mountains of Madness. 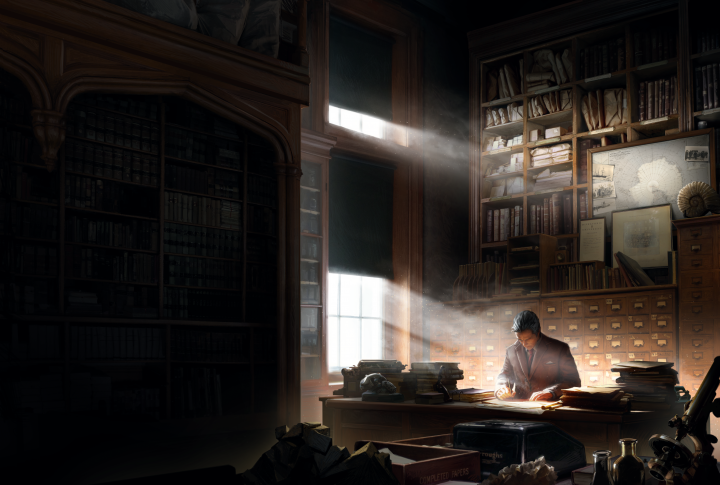 Science Fiction: the final frontier. These are the articles of the freelance journalist Peter Ray Allison. His continuing mission: to explore strange new realms of fiction, to seek out new genres and new visions of the future, to boldly geek where no one has geeked before.
More Goodness
at the mountains of madnessCthulhuhorror