Intriguing characters and engrossing narrative. Creepy and atmospheric. The character designs and Brown's art fit the tone of the story. No indication of where the story is going.

The labyrinthine story isn't suited for casual readers. Madder Red's actions won't be for everyone. 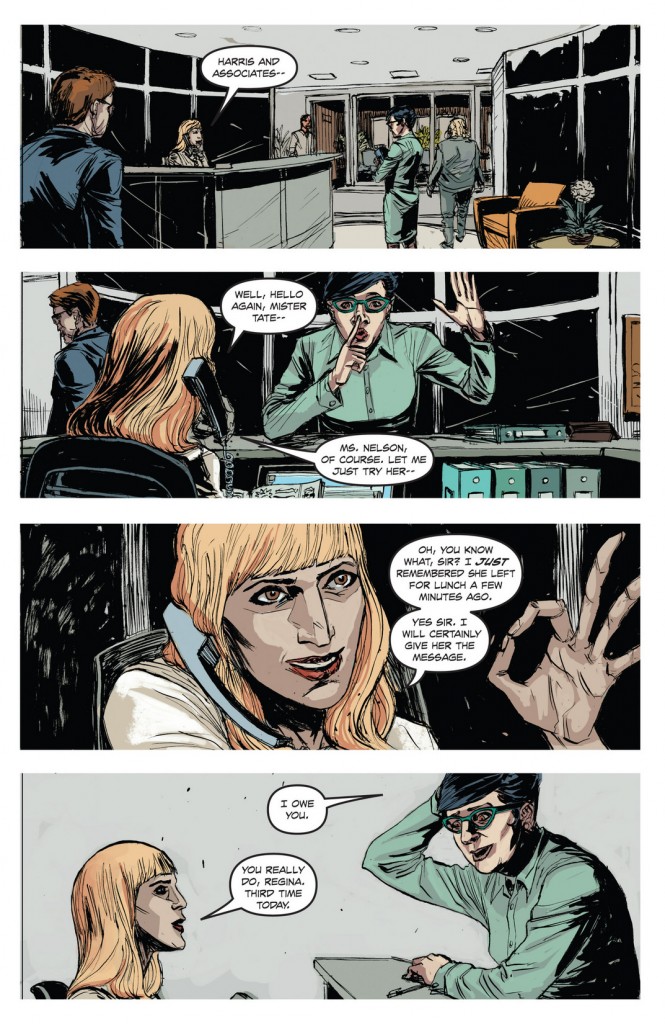 More is revealed about the actions of Madder Red. Detective Acevado makes Press an offer, Councilman Severin has a tough day in court and a series of seemingly unconnected events have devastating results.

Nick Spencer‘s Bedlam is without doubt one of the creepiest and unsettling titles currently being produced.

The main narrative is based around Fillmore Press, who previous to checking himself in for a decade in private psychiatric care for a ‘stress related breakdown’ went by the name of Madder Red and was a notoriously unhinged killer that terrorised the town of Bedlam and evaded capture or so he claims.

Now apparently ‘cured’ of his violent tendencies he has been helping out Detective Acevado with a series of strange homicides due to his unnerving insight into the minds of unhinged killers.

This issue is the start of a new story following the conclusion of the last issue and begins with a disturbing flashback. Madder Red is crashing a rally, the main speaker of which will be familiar from the last story arc. This introduction with Madder Red wearing a mitre and announcing ‘Heads up some of you are about to die’ is a clear indicator that Bedlam really isn’t for everybody.

Whilst this might immediately bring to mind the ‘shock and awe’ approach of Crossed, Bedlam is an entirely different premise.

The flow of the story is broken into different elements, the past featuring Madder Red and the present featuring Press in his squalid room often monologuing to himself and debating his sanity amongst other things. Here Press, upon watching a TV news report referring to the anniversary of one of Madder Red’s rampages, begins to hallucinate and see Madder Red sneaking up behind the news reporter before brutally killing him. 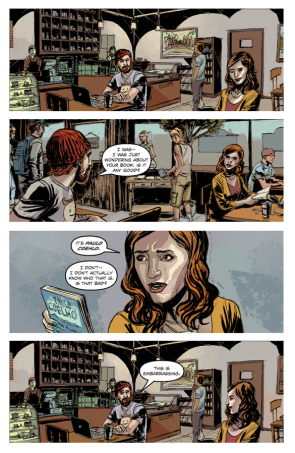 Press and his conversations with himself are in themselves reason enough to pick this up, his interactions with Acevado are also another example of Spencer’s knack for dialogue and interesting characters. Her surprise at his insight a constant, as Press looking at case files, dismisses one with the phrase ‘He’s killing prostitutes. It’s a bit passe’ and quickly summarises in detail the characteristics of the killer.

Focusing more on the bigger picture Councilman Severin is attempting to get the Extraordinary Crimes Task Force made permanent to deal with the on-going numerous bizarre murders which brings attention to the underlying politics at work in Bedlam.

Elsewhere in Bedlam trouble is brewing.

Nick Spencer (Morning Glories) is notorious for his densely plotted and complicated narratives and Bedlam is no different. In this issue there’s quite a lot of space devoted to new characters in scenes that seem removed from the on-going story and it’s only at the the conclusion that the relevance of these scenes seems to come into focus.

Whilst Madder Red is a great villain, Spencer wisely avoids the character overstaying his welcome with flashbacks kept brief so the character’s power doesn’t dissipate.

Riley Rossmo the artist for the first several issues has left the series and has been replaced by Ryan Browne. Normally this can be a problem, especially if the departing artist has a recognisable style and surprisingly despite Rossmo’s art being synonymous with Bedlam Browne manages to take up the mantle with ease.

Frazer Irving‘s creepy covers with their muted and dark colours are a perfect match for the dark and disturbing story within.

Bedlam also impresses on a design front with the now traditional splash title page with the story’s name and abstract art relating to the story that follows and good use of negative space taking up two pages and the back cover which features a different sketch of Madder Red tied to the story each issue.