Straight to the point: The prequel to the highly loved series The Mortal Instruments, The Infernal Devices proves itself to be better than the series that brought Cassandra Clare her fame, creating an original world, populated with likable characters and with a story that will keep you glued to the page. 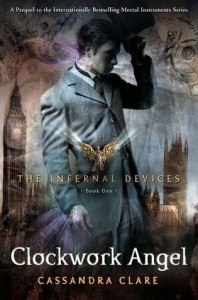 So far the series consists of two books: Clockwork  Angel and Clockwork Prince,  the final book Clockwork Princess set to be release in March. The story focuses just as TMI do on the adventures of a small group of young Nephilims, humans born with the blood of the Angel Raziel running through their veins. Unlike The Fallen series by Thomas Sniegoski these angelic creatures aren’t made by the unlawful mix of humans and angels, but by drinking the blood of the angel from a Mortal Cup, turning them into more or less super-powered humans, engineered to protect the human race from the demons of Hell who enjoy rampaging whenever they get the chance. The universe, like that of many fantasy books of late is populated by witches, warlocks, vampires and werewolves, fairies and a whole lot of other supernatural creatures, some so mysterious that no one can actually identify.

This particular series is targeting young adults and is usually marketed as such, with the heroes themselves being teenagers who end up living adventures that many of us couldn’t even dream of. The main characters are Will Herondale, an ancestor of Jace (the hero of The Mortal Instruments), Jem Carstairs, a Nephilim that has a tragic story that has probably made a lot of fans shed tears and Tessa Gray, a seemingly normal girl who gets thrown into a world she doesn’t understand. Perhaps the parallels with The Mortal Instruments are obvious for those that have read that series first, but the story is quite original and holds its own when compared to it’s sequel. In my opinion it’s actually somewhat better, given that Cassandra Clare started to work on it after partially having finished her other series. The world she creates makes more sense and the adventures are less predictable, with the mystery usually unresolved until the final pages of each book. With a third book coming up, The Infernal Devices has obviously earned its stripes, the internet buzzing with anticipation regarding the possible resolution of the story. 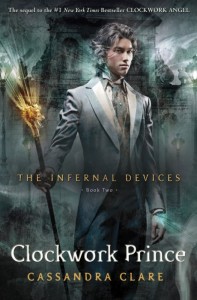 Each of the two books already published in the trilogy focus on one of our heroes – Will being the male lead in Clockwork Angel and Jem taking his place in Clockwork Prince, though Tessa Gray is the main protagonist, her being the voice we mostly hear throughout the two books, her importance unfathomed by anyone from the Nephilim group who, while they regard her as a friend, are still unfamiliar with what exactly she is and how her existence affects the world they all live in. The books have it all: the political side, the spiritual and mystery side, with just enough violence thrown into the  mix to keep everyone interested, not to mention the romantic subplot that, for many fans, has taken centre stage. While it doesn’t entirely focus on this, each of the books allots an important part to the love angle in a world governed by rules as old as time; forbidden romance being a key point that for once adds to the story rather than take from it.

With a potential movie in development, hopefully not in “development hell,” The Infernal Devices has the chance of becoming a phenomenon much like other young adult books have before it, such as Hunger Games or it’s own “sister” series The Mortal Instruments, which will be brought to the big screens this August. All in all, it’s well worth a read, but stay away if the fantasy genre is not your cup of tea.

What's there to say about me? I love the sci-fi and fantasy genre when I read, but I am in no way limited to that alone. I do think Frank Herbert deserves a statue for his writing(if there is one, point me in that direction, please). I enjoy writing quite a lot, but I am also kinda lazy. If you want to make me happy give me books or Doctor Who collectibles. Or a real TARDIS, in which case I will love you forever.
More Goodness
Bookbreakingcassandra clare