Beautiful art, a story that has a lot to say and LGBT content in a world that is still lacking.

Quite a slow build-up and, for a whole volume, not a lot of the promised romance.

Breaks might be slow to pick up steam, but for its target audience it might be the story that is needed. It touches on topics that adults usually avoid and kids have to figure out for themselves, so give it a chance.

The first volume of Breaks, a comic published by Soaring Penguin Press, compiles the fist 6 issues of the story of Ian Tanner and Cortland Hunt and the slow building romance between them. Penned by Emma Vieceli and Malin Rydén, the story was published initially as a webcomic that is still available for free on https://tapas.io/series/BREAKS/info

I admit that when I started reading volume 1, I found myself trapped in a ‘Oh, it’s just another teen movie‘ state of mind, as the focus on the high-school rivalry between Cortland Hunt and his nemesis Spencer felt so out of touch with my own, current, reality. But as I read more and more I became invested in the story and my curiosity got the best of me. As I tried to put together the characters’ pasts and motivations from flashback panels and little hints here and there, interspersed with the main plot, I started enjoying the story on the page and I did not put the volume down until I was done. 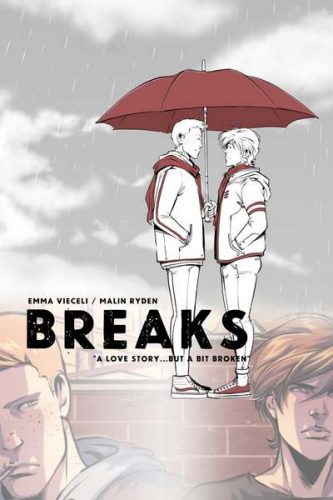 Primarily the story portrays two teenagers, soon to graduate, who are drawn in different directions by their loyalties, their stubbornness and the pull of maturity, at the same time. Ian Tanner is a popular guy, whose most used nickname is ‘arsehole’, but who hides a softer side. Behind his Bad boy mask he can be quite caring, particularly to outcast Cortland Hunt, a boy that transferred to the same school. Cortland comes with a mysterious past that has yet to be revealed in the first volume and with a chip on his shoulder that will probably rival Atlas’s.

The small snippets we get of said past hint at something painful and incredibly dramatic, however based on how long it has been dragged out, I wonder if the reveal won’t fall a little flat.

The story itself it’s slow to pick up, spending a little too much on portraying a rivalry that ends in violence more than once, rather than on the promised love story and its build up. The second volume came out not too long ago, so it is likely that the grand reveals will come, however I admit I felt a little cheated by being left wondering at the end of volume one.

I haven’t been a teenager in a long time, so maybe the whole awkwardness and misunderstandings that lead to some of the more dramatic scenes are failing to touch me in the way it might a highschool aged kid, but more than once I found myself fighting back the urge to try and reach through the screen to knock some heads together. 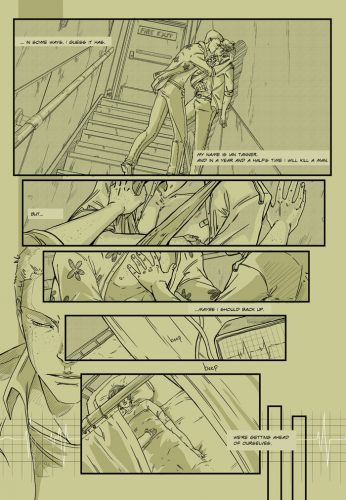 While Ian and Cortland take center stage, there are a lot of side characters with their own problems and personalities that do not feel like they have been created just to fill out the empty space left on the page. Harvey – Cortland’s equally mysterious brother –  Rennie, Amilah and even the bully Spencer, all come with their own set of issues that more or less help in painting the picture of who they are. Now that I have mentioned them, I should add that while it does cater to the LGBT community, the comic does not shy away from the bad, and that within the world of the comic homophobia and racism, much like in real life are present and accounted for.

Slurs are thrown around by the bullies in charge, there are mentions of racism and the violence I already brought up before, so brace yourself if you expect a cute love story. There might be one, but at least in volume one, the happy ending is not in sight.

That being said, I would still recommend you give this comic a try because while it might not tread in uncharted waters it does benefit from great artwork and a compelling story that promises more to come.

What's there to say about me? I love the sci-fi and fantasy genre when I read, but I am in no way limited to that alone. I do think Frank Herbert deserves a statue for his writing(if there is one, point me in that direction, please). I enjoy writing quite a lot, but I am also kinda lazy. If you want to make me happy give me books or Doctor Who collectibles. Or a real TARDIS, in which case I will love you forever.
More Goodness
cortland huntemma vieceliian tanner