previous
Where are the Female Avengers?
random
next
Fury: My War Gone By #10
Books and Comics
0 likes

Following on from his latest prophetic vision Cable, Forge and Dr Nemesis pay an unannounced visit to a clandestine S.W.O.R.D facility to obtain a space ship. Meanwhile Colossus wracked with guilt over the deaths caused at the factory (and his part in the Phoenix Five) is remanded into custody at The Raft, a maximum security super prison.

Colossus is the lynchpin of this issue, with the Russian powerhouse with a conscience having a rather effective heart to heart exchange with Wolverine on his entry into The Raft. Logan does him the courtesy of removing his handcuffs and then stating that it should be him behind bars with the amount of blood he’s spilt. It’s a solid and believable moment between the two and for a change it’s good to see Wolverine making an appearance that doesn’t turn into the ‘Wolverine show’. 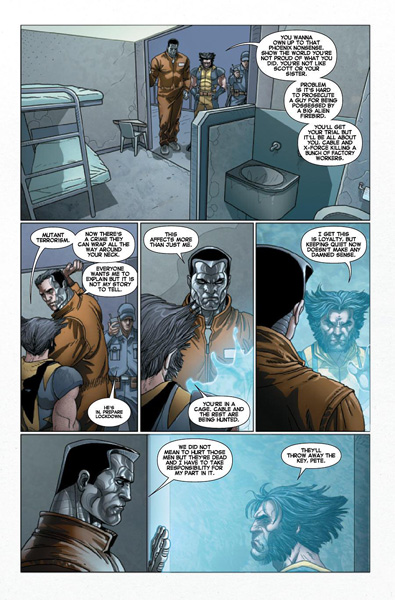 Wolverine and Colossus have a heart to heart.

Shadowcat makes an appearance which is nicely narrated by the note she leaves him, which refers to their complicated past ‘feels like we’ve spent half our lives trying to move on from us’ and also saying that she watched him sleep like a ‘total creep’ at one point ,whilst showing her disbelief at what he’s apparently been responsible for, before bringing him some art supplies. The real punch from this comes when Colossus catches Shadowcat before she phases back out and she can’t deal with it saying ‘I just can’t. I left a note’.

Forge and Dr Nemesis continue their attempts to out tech each other and generally acting like a pair of science geeks this time using a S.W.O.R.D mechanoid to hack into and hi-jack a spaceship, which generates the response ‘sciencegasm’ from Nemesis upon its appearance.

Domino meanwhile is infiltrating The Raft with the assistance of Boom Boom, a brash blast of youthful attitude, yet still finds the time to pay Colossus a visit (their hook up after a night downing tequila shots in Mexico last issue was a refreshingly good take on casual sex) and leads to an amusing exchange whilst Boom Boom searches for their objective ‘we’ve got this other thing going on downstairs’ as Domino puts it. 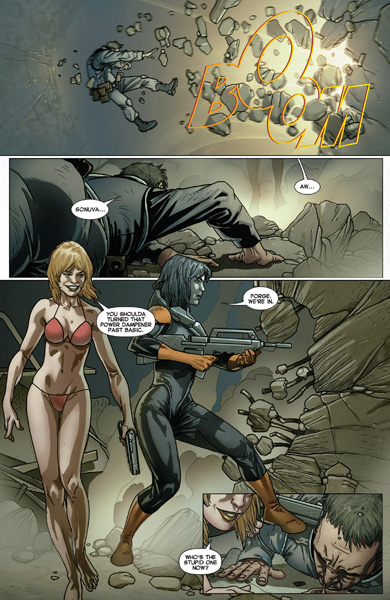 Things end on an ominous note with Cable coming up against his father Cyclops who is intent on stopping them taking their ship.

Now on to it’s second arc and Cable and X-Force seems to be hitting its stride, whilst its initial issues were met with cynical ‘I thought he died’ and ‘is this the 90’s all over again?’ responses, Hopeless seems to have a good handle on these characters and the art from Salvador Larocca is reliably solid. With Cable and the rest of his team wanted as terrorists for mass murder it’ll be interesting to see where Hopeless is going with these characters and what the ramifications are for other characters in their wake. One being Cable’s adopted daughter Hope who, as seen last issue is struggling with ‘normal’ life, as she put it to Cable ‘Bouncing around half a step in front of the gun, saving the future for a present that won’t ever appreciate it. That’s what I want. That’s my normal’.

Plus there’s no Rob Liefield which can only be a good thing.

Andy Haigh started writing to counteract the brain atrophying effects of Retail Hell, now it's an addiction. Andy is an unrepentant sequential art absorbist and comics are one of his passions. Other interests include Film, Music, Science Fiction and Horror novels and quality TV like Game of Thrones. He can talk about these at great length if only someone would listen. He lives a somewhat hermit like life in The Shire, spends too much time on social media and is still waiting to go on an adventure.
More Goodness
CableColossuscomics