Emphasis on setting the scene leaves little room for much else.

An impressive start to one of the most interesting new reads around. 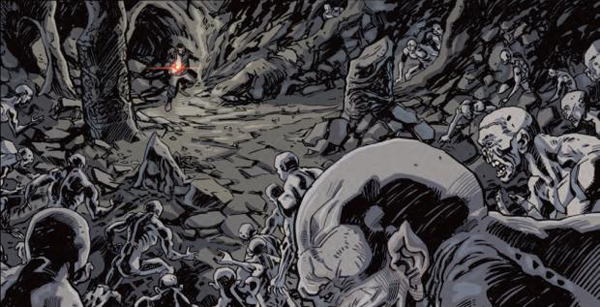 The last time I mentioned Dept. of Monsterology published by Renegade Arts Entertainment it was in the back end of 2013, an impressive pulp sci-fi inspired indie comics gem from writer Gordon Rennie and artist P J Holden that definitely made an impression.

Now in the back end of 2015 Dept. of Monsterology has returned with the imminent release of the of “Sabbaticals”, the second book in the series, with the story following the events of first book “Monsterology 101” here’s a look at the first issue.

Michael Calvary and Emma Hampton of Team Carnacki are venturing into Scotland investigating a house said to be the gate way to another world, whilst Professor Sonam and his young protégé Samwi are in Nepal. Team Challenger however are in South America where Amelia Court and her partner Harry Wilmington (a brain encased in a robotic body) have stumbled across something in the jungle whilst in the field with some grad students. Elsewhere Professor De Tovar is on his own personal mission and Professor Brooker is playing around with a dimensional portal in his lab at Dunsany College .

For a first issue this sets a lot of plates spinning establishing where the numerous characters are and what’s happening in their locations which doesn’t leave much room for anything else. What it does do though is leave the reader wanting to find out what’s going to happen next with a completely bonkers cliff hanger ending, which is exactly how a first issue should be. As well Gordon Rennie’s pulp infused writing ,which seems even more gleeful than before, P J Holden’s art (and Steve Denton’s colours) is a big draw with the pair creating drastically different environments each one looking suitably atmospheric, whether it’s eerie houses next to Scottish Lochs, the dense jungle of South America or desolate mountains in Nepal.

Dept of Monsterology Sabbaticals will be published by Renegade Arts Entertainment November 25 Issue one is available digitally now with other issues to follow prior to the books release.

Andy Haigh started writing to counteract the brain atrophying effects of Retail Hell, now it's an addiction. Andy is an unrepentant sequential art absorbist and comics are one of his passions. Other interests include Film, Music, Science Fiction and Horror novels and quality TV like Game of Thrones. He can talk about these at great length if only someone would listen. He lives a somewhat hermit like life in The Shire, spends too much time on social media and is still waiting to go on an adventure.
More Goodness
comicsDept of MonsterologyGordon Rennie