Deus Ex: Children’s Crusade – The Comics of the Future, Today!

Limited appeal to people who aren't already fans of Deus Ex as a franchise
Awkward pacing at times
Does a lot of "telling" and not "showing" with its expositionary opening.

Overall a decent comic, but perhaps avoid it if you're not already frothing for Deus Ex: Mankind Divided

Word on the internet is that, the minute you mention Deus Ex, someone somewhere will reinstall it on their PC. So, while my copy of Deus Ex is reinstalling, I want to talk to you about the latest development in the franchise.

Sat in my email inbox was a preview copy of the new Deus Ex comic series under their Universe umbrella of material.
Rather than think to myself “I never asked for this”, I immediately opened the comic and dove into the story.

Now, this first story arc, entitled Children’s Crusade, takes place between the events of Human Revolution and the upcoming Mankind Divided game.
The comic opens with a brief recap of the plot, explaining the happenings of the Aug Incident which… Oh, wait, I know the drill by now. 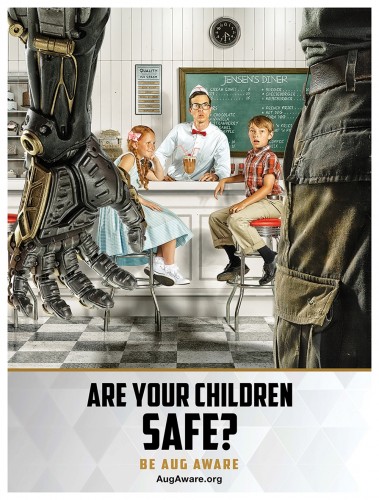 The Aug Incident was kind of a big deal. Cybernetically enhanced people were controlled with a signal and made to attack regular humans.

This was seen as a bad thing, for lots of reasons, but it caused Interpol to create Task Force 29 to deal with “Aug Terrorist” threats.

This is where Children’s Crusade kicks off.
Adam Jensen, freelance badass and professional king of being ungrateful – seriously, if you’re not familiar with “I never asked for this”, A: Where have you been and B: go Google it. I’ll wait – now works for Task Force 29 as their newest recruit.
Naturally, with Jensen being an Aug (and a pretty high tech one at that) this causes some animosity on the squad, with leader MacReady being against Jensen for being both an Aug and the new guy.

Written by Alex Irvine (who some of you may recognise for his work on Marvel’s Iron Man: Virus novel or from writing the novelisation of Pacific Rim) and drawn by fairly recent newcomer to the comic book world, John Aggs, who has spent a lot of time honing his craft in the world of webcomics but has the 2007 Tokyo Pop Grand Prize in their Rising Stars of Manga awards under his belt.

Now, I am a fan of the Deus Ex franchise, but I feel that my enjoyment of this comic was mainly drawn from that fandom.
Aggs’s artwork really complements the gritty Cyberpunk setting of Deus Ex and fully captures the vibe of franchise and, while I don’t want to take anything away from Irvine’s writing because again, it does fit the setting, I feel as though this comic loses a large amount of appeal for readers who may not be entirely clued up on Deus Ex.

If, however, like me, you enjoy Deus Ex and can’t get enough of Jensen not asking for things, you will probably get a lot of entertainment out of this comic and you will probably want to find out what happens in the story on the run-up to Mankind Divided.

Deus Ex: Children’s Crusade is released this Wednesday, 10th of February, from all decent comic book stockists for $3.99 (or however much your comic store charges for your comics here in the UK) and is published by Titan Comics.

Until next time, I never asked to be Craig.

Craig has been raised on geekery from a young age when his Mum introduced him to Star Trek the Next Generation on TV as a kid. Since then, he has gained a wide love of all things "Geek", be it books/comics, cinema or gaming in all formats. He has a particular keen interest in all manner of RPG, be it on a tabletop or in a field larping.
More Goodness
Adam JensencomicDeus Ex