Pacing is occasionally an issue, I would have liked the characters to be fleshed out some more.

Considering the number of graphic novel reviews I’m doing that are under the ‘Vertigo’ label, I feel that I should be on their pay roll (I swear I’m not). It’s just that all the series they produce, I really like. Whether it’s “100 bullets”, “Y: The Last Man”, “DMZ” or “Transmetropolitan”, they have one thing in common, they are exceedingly well written and drawn.

“DMZ” is a comic book series written by Brian Wood. Whilst Wood worked for Marvel as well as DC, his best work in my eyes is mainly unknown. These works include; “Northlanders” and “Demo” and “The New York Four/Five”.  Another slightly unknown fact about Mr Wood is his work for Rockstar Games. He was a staff designer on works including “Manhunt”, “Grand Theft Auto 3/Vice City” and “Max Payne”. 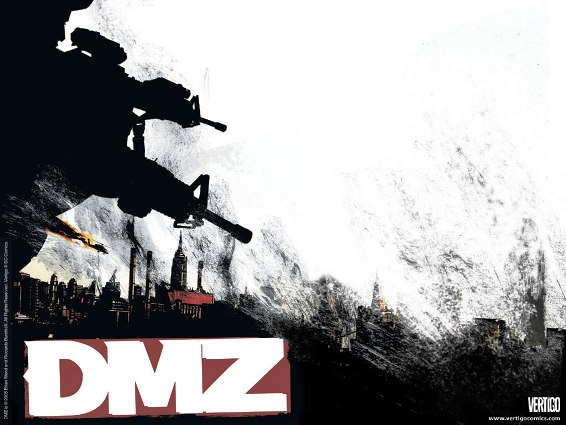 “DMZ” stands for ‘demilitarized zone’ and it’s set in the very near future, where a second American civil war has broken out. America, having sent its Army and National Guard into military conflicts around the world, neglected the threats coming within their own borders. Seemingly pushed too far, Middle America rises up and violently makes its grievances known. The two forces involved are: the federal government of the United States of America and the ‘Free States’ armies. Their conflict came to a standstill in New York. 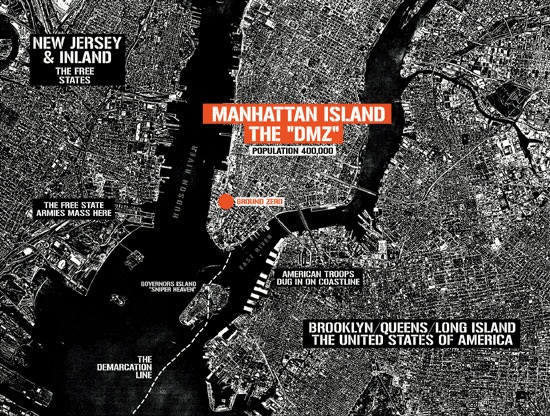 The story itself focuses around the ‘DMZ’ of Manhattan Island with the two forces encamped either side.  the forces of the ‘Free States’ in New Jersey and inland, the federal army of The United States of America in Brooklyn/Queens and Long Island. It starts with a young photo journalism intern named Matthew (Matty) Roth, who, thanks to his Dad, found himself as part of Viktor Ferguson’s news crew working with Liberty News Network. Due to Manhattan Island being a ‘DMZ’ and still having 400,000 people living there, cut off from society, Ferguson wanted to be the first reporter onto the island and report the real story. 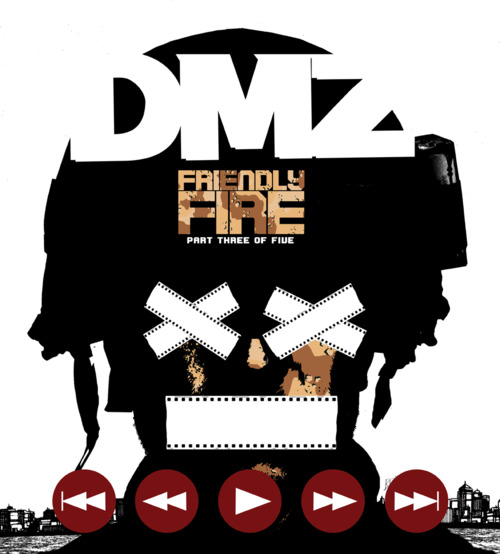 Whilst flying into Manhattan Island, their helicopter is attacked, leaving only Matty alive, completely unprepared for the new world that now engulfs him. Thankfully for him he meets one ‘Zee Hernandez’ who before the war was a medical student. She takes pity on Matty and tends to his wounds before leaving him, being very untrusting of his motives in coming to Manhattan.

The series follows Roth around as he takes up the mantle left by the now deceased Viktor Ferguson – telling the story of the voiceless in Manhattan.

Being an American series, there are officially 72 issues, but for us in Britain it can be collected as 12 trade paperback volumes.

It is certainly another Graphic Novel series aimed primarily toward a more mature audience, with strong language, sex and violence never far from the book’s pages. But, like so many of the Vertigo titles, has been exceedingly well written. The city and its inhabitants are gritty, down to earth and believable, and the heroes are not of the ‘super’ variety, they do have their flaws.

It is a series with some very nice artwork, which is done by Brian Wood himself and Riccardo Burchielli. Burchielli is best known for his work on DMZ, in fact if it were not for Will Dennis, the series editor, he never would have been found at all. Dennis discovered a series of illustrations the Italian had done in a comic book fair in Naples in March ’03, which he had put on Wood’s desk, who after seeing them approached the Italian to work for them at DMZ.

As an aspiring journalist I have found a home here at geek-pride, where I can write upon many subjects. If anybody has something they believe should be reviewed or newsworthy then feel free to send me a message, I always enjoy talking to people.
More Goodness
100 BulletsbreakingBrian Wood