In this latest volume, the killer Razorback is dead, but not before taking out two of LAPD’s finest. Flask and the rest of the Elephantmen know her by another name though: Yvette, the leader of the French resistance during the bloody war against China that they were bred to fight. Another killer known as The Silencer has emerged, and is currently holed up in Casbah Joe’s Eye of the Needle restaurant. Meanwhile Sahara, devoted wife of Obadiah Horn (CEO of megacorp Horn Industries and media focal point for Elephantmen) has just informed him that she’s pregnant with his child.

On paper, the idea of Richard Starkings’ Elephantmen seems destined to fail: anthropomorphic animals are genetically engineered and indoctrinated to be killing machines by an insidious corporation, and sold for an eyewatering price, to take part in a war between Africa and China over the remnants of European countries ravaged by a deadly pathogen.  Sounds fun in a disposable pulp-inspired way, however that’s not where this story takes place.

The war has long since faded into history, with the UN emerging victorious- at great cost. The surviving Elephantmen, some 15,000 having been victims themselves, have been granted amnesty, and now co-exist alongside the regular population.

Anthropomorphic animals are for the most part seen in a cartoonish light, due to Disney and Hanna-Barbera’s numerous characters being etched into the fabric of pop culture for decades. Whilst there are several exceptions -like Blacksad from Juan Díaz Canales and Juanjo Guarnido or Bryan Talbot’s Grandville books- this rule still generally applies.  Elephantmen is a story about crime investigators in a bleak future Los Angeles, in a stark contrast to this idea which may be an obstacle for some.  Elephantmen is actually 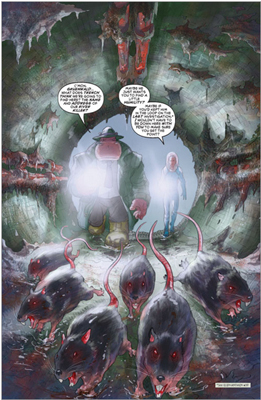 Hip and Gruenwald investigate the sewers.

spun out from an older title ‘Hip Flask’ which laid the foundations, which is another potential stumbling block.

Despite this, Elephantmen is one of the best titles currently being produced today. Existing seemingly in its own pocket universe- far removed from the likes of Marvel and DC and superheroes altogether.

It should be noted that Elephantmen is not for the casual reader. There’s a lot going on here. 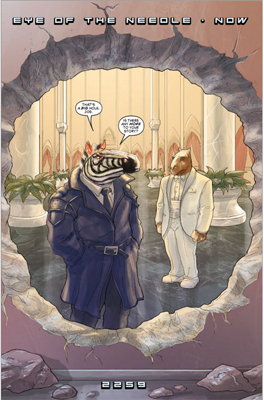 ‘The Long and Ghastly Kitchen’, for example, features an exploration of the title’s backstory from the perspective of one of Mappo’s scientists, who narrates his life story to a strange individual who has appeared to record his confession.

Seeing the already rich mythology further expanded upon from an alternate perspective is an interesting twist. The exploration of the historical and philosophical underpinnings of animal/human hybrids is impressive stuff alongside the medical science history which gives the story its title. The further demonstration of Nikken (the grand architect of the transgenic program) and his god complex adds another layer to an already despicable character. The crowning achievement though is the sting in the tale of this story.

On the surface Elelphantmen is hard boiled noir blended with dystopian science fiction. Under the surface though it’s about relationships and people just trying to get by. Panya finds herself shacked up with The Silencer despite hating him, Miki and Hips relationship takes a battering after both of them make misguided assumptions on things they’ve seen, a recovering Ebony mistakes Vanity’s platonic love for something more and Sahara and Horn’s relationship underpins the whole narrative.

One of the things that has also been present from the start is social commentary- the most obvious theme being genetic experimentation, but there’s also the examination of racism in a fictional world; Elephantmen being referred to as ‘munts’ by those that hate them, and even a burgeoning black market in Elephantman meat for those that can afford it. 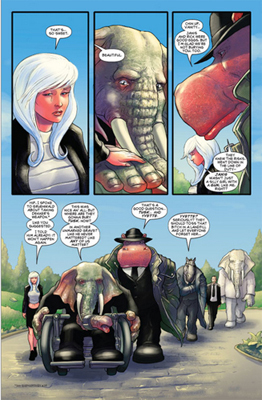 Relationships between humans and Elephantmen are frowned upon, and the relationship between Sahara and Horn is a lightning conductor for all the prejudice it generates; the announcement of Sahara’s pregnancy only further complicates things. On top of this, Gruenwald has to tell Hip that the higher ups want him to stop spending time with his girlfriend Miki due to the bad publicity it might generate for the agency.  Miki’s mother disapproves of her feelings for Hip for this very reason, although their relationship is more complicated than even Miki originally thought .

There’s also the recurring theme of war veterans and their difficulty adapting to society. Ebony is the real embodiment of this, being subject to bizarre hallucinations where he is a barbarian, and unable to talk about the visions that plague him with Vanity despite their close bond. There’s a poignant character moment as the still wheelchair-bound Ebony attends the funeral of Blackthorne and Dekker, where he encounters an embittered Elephantman veteran in far worse condition who berates him for being so morose and not taking advantage of Vanity the ‘little hottie’.

Gabbatha brings with him some commentary on religion, as despite being an Elephantman he is a Buddhist spiritual leader. A TV debate with an irate representative from the ‘Children of God’ displays one of the ironies of the series, as Gabbatha comes across as far more ‘human’ than the reverend who dismisses him with the callous refrain ‘And who appointed him a religious leader? Munts should be forbidden any religious affiliation’.

While Starkings’ story may be a rich and involving tapestry of interwoven plot threads another fundamental part of Elephantmen is the art:.an ensemble team of Axel Meddlin, Tony Parker, David Hine, Shaky Kane, Dave Sim and Tula Lotay with colours from Axel Meddlin, Blond and Rob Steen.

Meddlin does most of the heavy lifting here- the double page of Blackthorne and Dekker’s funeral is a sombre display, as befits the setting. It also displays the importance of scale in Elephantmen, with Gabbatha and Trench dwarfing Gruenwald stood beside them, and the wheelchair-bound Ebony still being the same height as Vanity. He handles action and emotion well too, with flashbacks to Ebony fighting and an argument between Hip and Miki both contrasting examples of extremes. 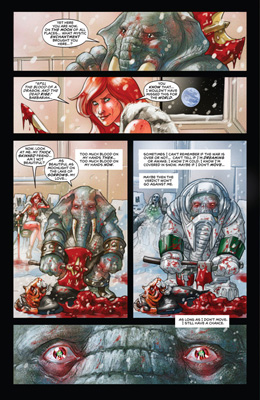 The contrast between Ebony’s hallucinations and reality.

Elsewhere several dream sequences are handled with style by Dave Sim and Tula Latay, whilst David Hine and Shaky Kane provide some contrasting artwork for their stories.

There’s plenty of dry humour too, whether it’s the diners at the Eye of the Needle thinking the irate cyborg is the evening’s entertainment, or the great image of Ebony stood outside a Hooters playing on the different definitions of the word ‘hooter’ in the US and UK. Casbah Joe is a wry play on Camel Joe the logo and advertising image of the American Camel’s cigarettes.

It should be noted how lavishly well-produced these volumes are. The hardback packs over 300 glossy pages, a foreword from artist Dave Sim, an interview with Richard Starkings, a section which features profiles on everyone that contributed, and a dedication gallery to great artist Arnaldo Putzu (responsible for the amazing painted covers of Look In magazine in the 70s and 80s) who died in 2012.

Through profoundly deft characterisation Richard Starkings has created a cast of characters and a stage which is both compulsive and enthralling.

Andy Haigh started writing to counteract the brain atrophying effects of Retail Hell, now it's an addiction. Andy is an unrepentant sequential art absorbist and comics are one of his passions. Other interests include Film, Music, Science Fiction and Horror novels and quality TV like Game of Thrones. He can talk about these at great length if only someone would listen. He lives a somewhat hermit like life in The Shire, spends too much time on social media and is still waiting to go on an adventure.
More Goodness
breakingcomicsDavid Hine