Explicit nature isn't for everyone.

Green Gorge, Washington. Agent Shoe and the F.B.I continue their investigation into Rikkard’s compound in the hills and the subsequent clean up .

Meanwhile in Fordbridge, British Columbia Chesnutt continues on his quest for vengeance against Rikkard after the death of Sophie.

Avatar the indie publisher known for seducing numerous writers with it’s anything goes policy has a reputation for titles that are not for the faint hearted. With a no holds barred approach to it’s depictions of brutal violence, sex and more disturbing things and Ferals is no exception . 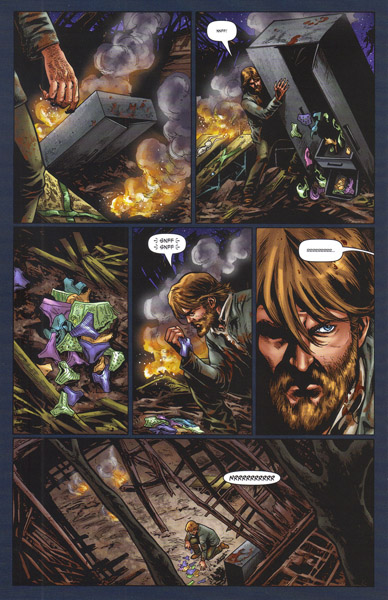 Chesnutt gets the scent.

The Dale Chesnutt here is a distinctly different man than the one who found the bloody remains of his best friend in issue #1 . So far Chesnutt has been infected by Gerda Ingebritsen and become a wolf-man himself, had a brutal battle with an alpha wolf, been abducted by the cult Gerda was part of, force fed the blood of the alpha wolf they worshiped in order to replace it ,then been caught by the F.B.I when they stormed the cults meeting place, and forced into helping them uncover the truth behind another suspected cult of wolfmen or ‘ferals’ .

Since then Chesnutt has gone undercover as Sven in Green Gorge, has had his undercover partner Pia ,posing as his wife Sophie, fall in love with him and get pregnant,then she’s been brutally murdered by Rikkard, the leader of a splinter group of the Green Gorge cult, (who has also been breeding his own alpha wolves against the order of cult leader Adolph) in payback for Chesnutt leading Adolph and shortly after the F.B.I to Rikkard’s place after Adolph’s men slaughtered the pregnant women. 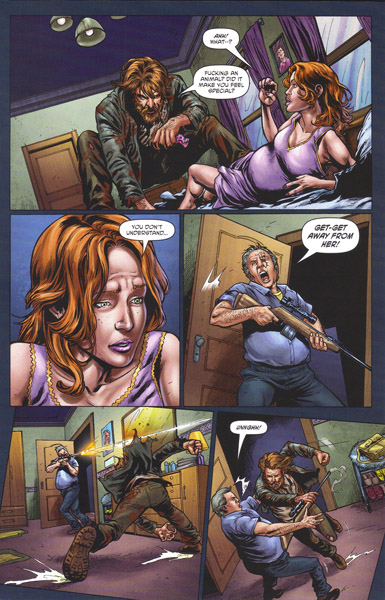 This issue is the start of a new story arc with Chesnutt focused on tracking down Rikkard for bloody vengeance leaving the F.B.I and the army to mop up the carnage in Green Gorge, left in the wake of Rikkard’s alpha wolves running amok in town. Whilst it’s definitely an acquired taste Lapham has carved out his own take on werewolf mythology here not falling on the traditional ‘rules’ but creating his own. The werewolves rather than being monsters are a people living in close knit communities scattered around the country amongst the population.

Artist Gabriel Andrade has been consistently handling whatever’s been required from animalistic sex, Chesnutt’s feverish hallucinations, brutal bloody violence, various locations, dialogue centric character moments and more besides. The colours from Digikore really pop too. Ferals almost matches Avatar’s notorious Crossed series for disturbing content. A key difference between the two being that while Crossed seems happy to wallow in the depths of shock for shock’s sake with writers seemingly trying to outdo each other Ferals has plenty going on besides sex and gore.

Andy Haigh started writing to counteract the brain atrophying effects of Retail Hell, now it's an addiction. Andy is an unrepentant sequential art absorbist and comics are one of his passions. Other interests include Film, Music, Science Fiction and Horror novels and quality TV like Game of Thrones. He can talk about these at great length if only someone would listen. He lives a somewhat hermit like life in The Shire, spends too much time on social media and is still waiting to go on an adventure.
More Goodness
avatarcomicsDavid Lapham