Doesn't shy away from the brutality of its subject.
No-one can match Garth Ennis at writing Nick Fury.

If you're wanting a pro-American good guys versus bad guys story then look elsewhere.

14 years after the events of Vietnam, Nick Fury finds himself in Nicaragua at the behest of Senator ‘Pug’ Mcluskey. Whilst there it becomes apparent that despite not officially being in charge, ‘Barracuda’ is running things at the encampment and doesn’t like the idea of outsiders looking around.

His name might be synonymous with Hellblazer, Preacher, The Punisher and more recently The Boys but what Garth Ennis really excels at is war stories, jettisoning the crass black humour found in a lot of his other work for the bleak reality of the front line and the politics behind them.

With a framing device of an older Fury telling his story, it’s a cunning way to write a story about various wars and conflicts despite being a Marvel comic. 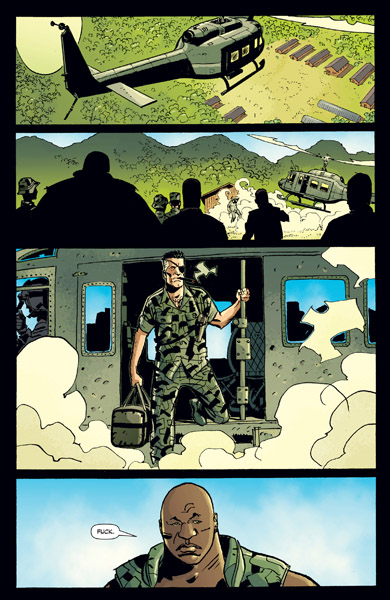 This issue is essentially moving pieces into place, so we are introduced to Barracuda (who previously featured in The Punisher) who is in the middle of interrogating some prisoners and wielding a chainsaw rather gleefully.

Despite appearances Barracuda isn’t just muscle as one of his men looking at Fury from afar says ‘Shit, don’t look all that much to me’ Barracuda’s response ‘then you even dumber’n I thought you was Danby’.

The snappy dialogue between Fury and Barracuda is great stuff as they both try to fake out each other without the other realising, with Fury surmising to Agent Hatherly his right hand man that ‘He’s smart as Hell, I can tell you that much’ 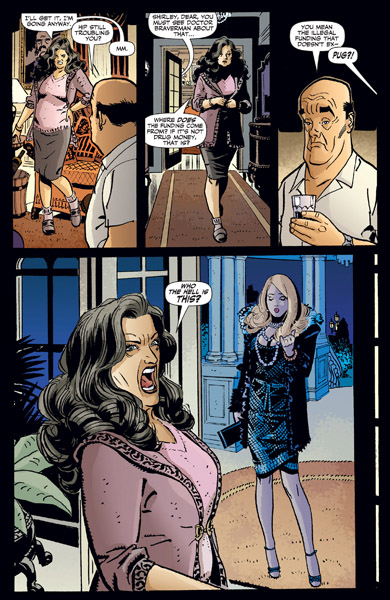 Shirley has an unwelcome visitor.

Back in the US, Pug and his wife/secretary Shirley debate the political and moral ramifications of the Agency’s operations over seas. The shift in the pairs relationship dynamic is nicely handled as Defablio isn’t as naive to the ways of the world as before.

Parlov’s art maybe a little quirky in places like pug’s expressions but Fury looks great, he isn’t disproportionately or inappropriately built and the steely look in his eye, in several panels really nail’s Fury’s presence. There’s some great imagery to be found, Fury stepping off the chopper, cigar hanging out of his mouth, bag in hand. Really says all that needs to be said about his character in one dialogue free panel.

Barracuda on the other hand looks almost child like in his expressions and seeing the two contrast works really well.

Despite this being a Max title Ennis isn’t constantly trying to throw in adult content for the sake of it which compared to other adult oriented titles makes a refreshing change.

Andy Haigh started writing to counteract the brain atrophying effects of Retail Hell, now it's an addiction. Andy is an unrepentant sequential art absorbist and comics are one of his passions. Other interests include Film, Music, Science Fiction and Horror novels and quality TV like Game of Thrones. He can talk about these at great length if only someone would listen. He lives a somewhat hermit like life in The Shire, spends too much time on social media and is still waiting to go on an adventure.
More Goodness
comicsGarth EnnisGoran Parlov