Despite a disconcerting start, Hand of Glory evolved into a satisfying novel that blended historical-fiction, war, horror and murder-mystery into something that was refreshingly original.

The novel opens in the trenches of Flanders, but soon shifts to rural Staffordshire.  It is here where the mystery kicks in as the characters investigate a horrific murder that took place during an almost impossible burglary.  Boulton uses this dramatic change in locations to great effect to reinforce the extremes faced by the soldiers when they return home.  Boulton similarly captures the sense of dislocation experienced by people suffering from trauma

The story follows a variety of characters, principally the former soldier Captain Harding.  However, the most entertaining characters were Detective Parker and the pawnbroker Taffy, who expand the world the and story.  These shifting viewpoints can be disconcerting at first, for readers who are initially unaware of the change in perspective

Boulton creates a diverse series of characters that she brings to life through their interactions with the different strata of 1920s society.  She uses them to explore the shared-brotherhood that forms between people who have served in the armed forces; a bond which transgresses the conventional boundaries of 1920s society.

Through the texture in her descriptions and the diverse characters, Boulton brings to life 1920’s rural Britain, one which is suffering from a rapacious post-war economy.  Her writing captures the differing speech patterns between the upper, middle and lower classes at that time, without confusing reader with obsolete mannerisms.

There is little mystery to the murder, as from the outset we can easily discern who the killer is.  Nonetheless, it was fascinating to read as the characters discover the truth for themselves.  However, it would have been far more satisfying if the identity and ability of the killer was obfuscated, but this would have dramatically changed the novel.

As alluded to earlier, there is a significant supernatural element, along with a undertone of horror.  However, these are used to great effect to add texture and substance to the story and underscore the consequences of war, and the brutality of murder.

It was refreshing to find that the soldiers in Boulton’s novel are neither heroes or villains, but utterly human.  Boulton uses her portrayal of their shattered humanity to capture the grim despair that saturated World War One and the subsequent peace.  Ultimately, for all the supernatural elements, Hand of Glory is a tale about the true cost of our humanity and how we should remember those who have died. 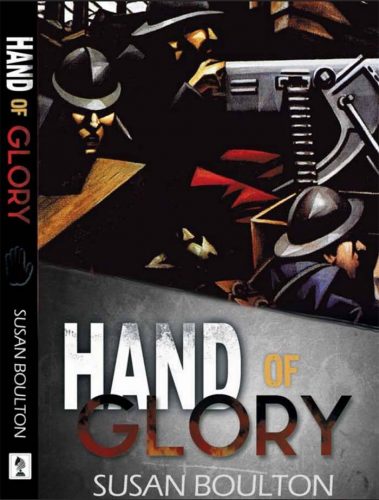 Science Fiction: the final frontier. These are the articles of the freelance journalist Peter Ray Allison. His continuing mission: to explore strange new realms of fiction, to seek out new genres and new visions of the future, to boldly geek where no one has geeked before.
More Goodness
BookFantasyHistorical