Not one for superhero fans.

580 A.D, the bitter cold of The North. Rikard ,his father Kirk and a handful of other Norsemen are retreating back to their settlement in the aftermath of a bloody battle. In the midst of their retreat Rikard sees an apparition of himself weeping tears of blood. With their enemies in pursuit they are forced to make a stand outside the gates, knowing opening them would doom everyone and a gothic tale of bloodshed and dark sorcery begins.

Helheim from Oni Press is a collaboration between writer Cullen Bunn (The Sixth Gun, Marvel’s Fearless Defenders) and Joëlle Jones (You have killed me,Vertigo’s Fables) which combines several elements in a way not seen before. 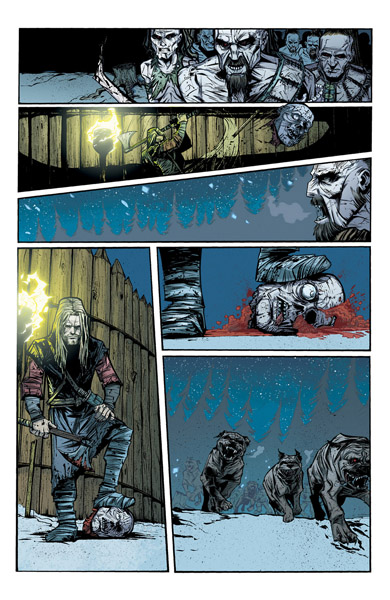 The Norsemen make their stand.

Rikard and the rest of the Norsemen’s desperate scramble for the safety of their settlement rather than just being a few throw away panels actually takes up several pages. In the hands of a less talented duo this would smack of filler and a lack of ideas but here it adds a great sense of atmosphere and introduces the reader to the characters. Rikard is struggling to keep up with his Father and the rest of the men due to carrying a mortally wounded warrior, who he would not see die on his knees, his Father however is uninterested in hearing what Rikard sees and chastises him for carrying the warrior who is only slowing him down.

When the group realise that they will not make it in time they make a stand outside the settlement and a bloody skirmish ensues. The brave few taking on a larger group is a well known trope but it is utilised well here. Jone’s character designs give the Norsemen a rugged look whilst at the same time not making them look superhuman. 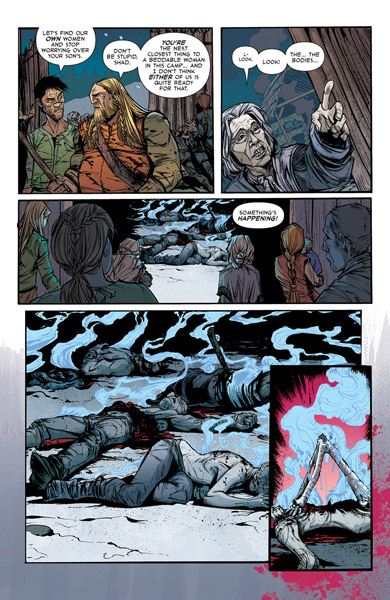 Foul magic is at work.

The fight is a frenetic and bloody affair, with Jones making good use of both silhouettes and the contrast between the crimson blood and the virgin snow. Most importantly it avoids being hamstrung by too much going on. With the action kept simple in each panel, rather than descending into a hard to follow mass of limbs and weapons which only confuses the reader and pushes them out of the story.

Their enemies vanquished the warriors venture inside the settlement and Rikard is reunited with his lover Bera whilst his Father is greeted by one of his friends. In another title this would be the whole story and lead into the next issue, Bunn has far too many ideas for such a pedestrian plot though. this is just the beginning of the story really with another threat surfacing shortly, black magic, the undead and more play their part, leading up to an ending which makes you want to pick up the next issue just to see what’s going on and where these characters are headed.

Andy Haigh started writing to counteract the brain atrophying effects of Retail Hell, now it's an addiction. Andy is an unrepentant sequential art absorbist and comics are one of his passions. Other interests include Film, Music, Science Fiction and Horror novels and quality TV like Game of Thrones. He can talk about these at great length if only someone would listen. He lives a somewhat hermit like life in The Shire, spends too much time on social media and is still waiting to go on an adventure.
More Goodness
comicsCullen BunnHelheim