previous
Tobin’s Spirit Guide: a review of every spook, specter or ghost.
random
next
Kickstart this - A Crowdfunding round up.
Books and Comics
0 likes

The second part of my journey takes me to the magnificent Convention Centre Dublin on the banks of the Liffey; a strikingly modern building affectionately known to the locals as “the tube in the cube.” This 8000 capacity venue was brimming with nerds from all fandoms the like never really seen in Ireland before, a testament to the rise and acceptance in pop culture fandom.

The rise in such conventions has gone hand in hand with the growth of the indie Irish comic book industry evident in that there were over thirty artists and writers presenting their work at the Comic Con Gallery.

Hugo Boylan is a Dublin based comic book writer who publishes both in print and online. He frequently collaborates with other members of the local comic book scene. Hugo showed me some of his creations that he had on offer.

HB: Superhero Helpdesk was one of the first things we made with Tree Farrell, we did that for about two years and we got the first collection out. It goes free online every Monday.

High Fantasy is a comic that I did with Amanda Spitzner about three years ago and it’s about a group of adventurers who are really bad at being adventurers; they end up committing a regicide and things just keep getting worse from there. Those are the comedies I do.

I’ve also got a book called Malevolence which is launching this year and I can’t say much about but it’s a crime horror story, it’s a very Irish story. It’s about a kid who has a sister who emigrates and things keep going wrong for him, there’s a racist cop who hates Irish people, has a chip on his shoulder about the protagonist and he want’s to get him. 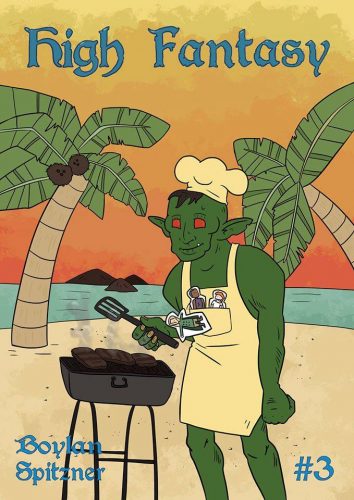 HB: My cousin when I was young, I think I was 8, showed me 2000 AD, Alan Moore, she really got me into comics, I didn’t buy one until I was 14 and every weekend she would pass me the latest things that she read. But it got me into the whole world of narrative sequential art and narrative story telling. What you can do in comics is so different than in novels, plays and poetry and even in film. In one particular book I have three timelines going at the same time and they collide at the very same time on the page. It’s very difficult to do via the written word but achievable in comics. That’s why I love comics. I’ve been writing for about 4 years; I did about a year of planning before we did the helpdesk. I’ve got a buddy who I collaborated with and it took a long time to finally get the work down.

GP: Where do you feel the comic book industry is at in Ireland at the moment?

HB: I wouldn’t really say we had an industry per say but we’re coming along to having a great community going. Some of the quality is amazing, The Guards (see below) is really impressive; the quality of that book will blow you away. There are guys here who were selling prints last year now they are producing comic books, proper high quality stuff.

GP: What’s your process when it comes to writing a comic?

HB: As a writer I start with what I want to write. For instance malevolence I wanted to tell an Irish story, a very Irish story. I wanted to draw from Irish myth; the power of three for example or the emigration side of things, leaving home is a huge part of our identity, we were forced to leave our country in the early 1900’s so I wrote that into one of my stories. I’ll take a week, do a draft and Kerry will review it and give it the criticism it needs, so from there I drank a load of coffee and got to it. I was lucky in that the artist John Quigley approached me and asked did I want to do a comic together. One of the biggest problems is for writers to find collaborators and the easiest way to get around that is by paying as many of the artists I work with as possible for their work. I try to pay them as much as I can, we don’t make that much in the small press but we’re all here in this community trying to do the best we can and a lot of people understand and appreciate that. 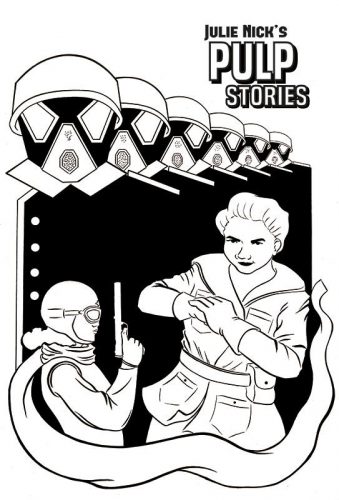 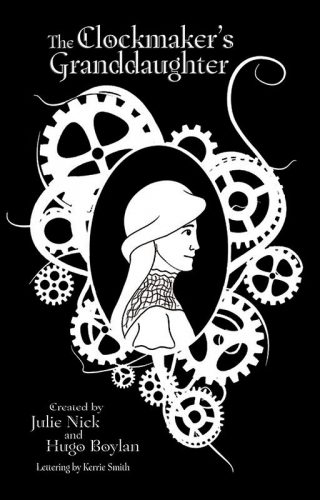 Julie Nick‘s Twitter page describes her as a “drawer of comics” and fine comics they are too. Her work channels retro stylings of pulp fiction and has a somewhat traditional Gothic quality to it.

JN: I have two books happening right now The Clockmakers Granddaughter and Pulp Stories. I make comics generally. I’m collaborating with Hugo Boylan one based on Edgar Allen Poe stories the other is my pulp series, it has two short stories of ladies kicking butt in the World War Two era. I try to play with storytelling and I like to have lots of action in them and pulply goodness.

GP: When did you start? What got you into comics?

JN: I’m originally from Romania and I started reading comics when I moved her four years ago. It just blew my mind. I knew I wanted to make this, comics are magic, and it’s like a movie in your head when you read it so I knew I wanted to get into this so I’ve been creating now for two years now.

GP: Of all the local heroes of comic books who do admire the most?

JN: There’s lots of people to admire, there’s the pros who’ve been doing work for years who’ve been paving the way for us to do it now and get recognition  Stephen Mooney, Nick Roche and Declan Shalvey, they’ve been doing great work for a while now. There’s so much talent these days. It’s a really cool community to be a part of. It’s buzzing with talent. 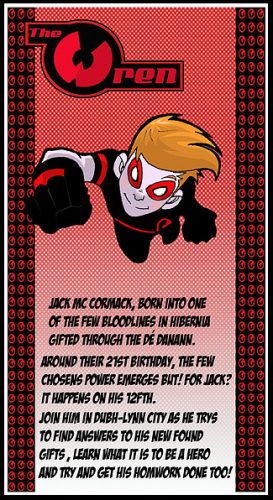 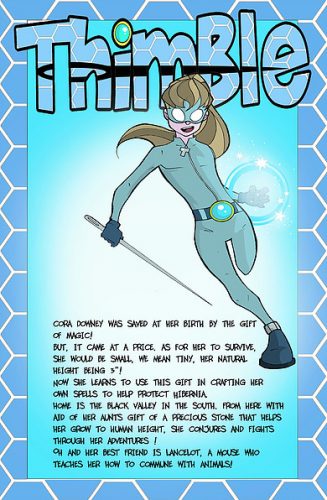 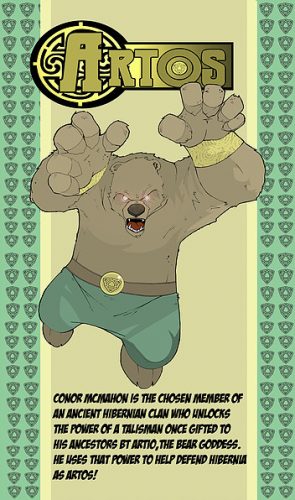 Jason Browne is one of the co founders of Button Press Publications whose MO is to create uniquely Irish stories which are accessible for all regardless of age.

JB: They’re based in an alternative Ireland. The Ireland that exists is an Ireland that everything we know from the myths and legends is actual history. So that’s the basis of the history and so we move to the modern day. It’s the idea that these different races married into the mortal humans so their powers and attributes are channelled through in certain lines. These are manifested as superpowers when the character reaches adolescence. We created the world called Hibernia and we have stories that exist outside of Dublin in different parts of the country. We use real locations and historical subjects to provide the back stories, Wicklow, Antrim, Kerry etc.

JB: I’ve always read comic books as a kid, specifically the American ones superhero ones. I work part time at Forbidden Planet in Dublin. I found that working in store that I couldn’t recommend certain comics for kids because a lot of them were 13+ so we started with that gap; trying to create a comic that everyone can read but at the same time not talking down to them. It’s doing really well now it’s paying for itself so that makes it even more fun.

GP: Who do you admire in the Irish comic scene today?

JB: There are so many people now and especially with social media it’s opened the door for so many people. I can advertise online, I’ve got comics on sale in New York, Toronto, and London. There’s a huge fan base in Mexico! If you have the idea, the passion you can do it, you can go out there and do it yourself! It’s a constant learning process. The more you draw the better you get. 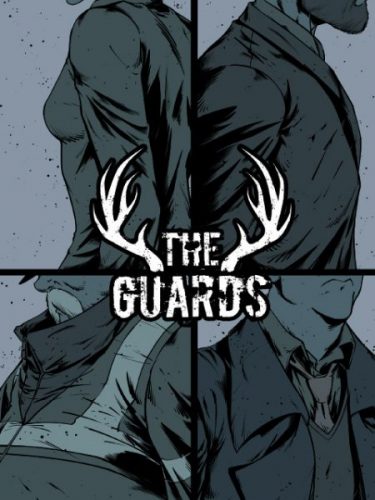 Shane Ormond and Kevin Keane spoke to me about the creative process behind The Guards. They, along with Colin O’Mahoney and Alice Coleman,have created “a paranormal crime drama about people who don’t belong.”

SO: It has its roots in True Detective and David Fincher’s Se7en. Do you remember that that film had an almost supernatural quality about it? That’s what we wanted to go for.

GP: So what got you into it? Why start writing comics?

SO: Down in Cork there’s a couple of lads, Turncoat Press, they started a comic book club down there. The comic book scene in Cork for the past few years has been kind of dead, the interest is there and the people are there for it but there was nowhere to go or anywhere to meet up. So these lads started the comic book club in a pub in town and that’s how I met Kevin. After a lot of discussion we just thought “f**k it, we’ll do it ourselves!” I was developing a shorter more condensed version with another collaborator which didn’t work out which in turn got Kevin involved. It was a cascade of coincidences.

The Guards is literally fresh off the press, the reception has been great, the lads from Pubcast give us a mention and a lot of people have been coming over to see us on the basis of that endorsement. 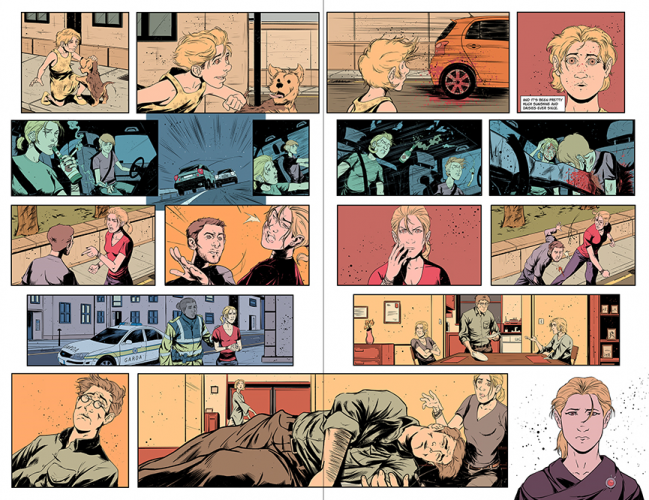 KK: It’s a labour of love; it’s something you have to get out. When you see it realised, in front of you, its tangible it’s all justified. Everyone’s got their own aspirations, everyone knows where they want to end up but just for now this is just perfect. Just seeing people picking it up and taking an interest in it is so validating.

GP: So where do you think the Irish comic book scene is at these days?

SO: It’s stronger than ever, the standard is higher now for small press publishing. For the last few years it’s been in development; there’s different levels of quality and ability of work as in there was a huge gap in quality but now the people who were lower down have really come on and closed that gap. There’s an even playing field now. All these guys here at Comic Con on these tables are putting out work, it’s all such a high standard now that the collectors and buyers are going home with some really good stuff, they’re genuinely supporting a growing industry. Up here in Dublin it’s massive because of the size of the city but down in Cork there’s guys like us fighting in the trenches fighting to keep it going.

Whilst this article merely scratches the surface of the Irish Comic Book scene check out the news from ICN (Irish Comic News) to keep on top of some of the great talent that’s coming out of the Emerald Isle.

Mark lives in Belfast where he runs a ukulele club, plays board games and watches old TV shows. His interests include Cold War architecture, trawling for vintage toys on eBay and reading Starship schematics on Memory Alpha. He was a finalist on the UK version of King of the Nerds.
More Goodness
comicsgraphic novelinterviews