A great premise with evocatively described locations for a moody post-apocalyptic novel.

The rapid pacing of the plot resulted in some characters being under-developed.

Jinx Town is a promising, if flawed, introduction to a new series that finishes with a great cliff-hanger that was all the better for its tragic inevitability.

With Sam Stone having firmly cemented her reputation within the horror genre, it was something of a surprise to learn that her latest project was to be a science fiction series called The Jinx Chronicles. Opening with Jinx Town, the series is set in modern-day England, specifically in and around Manchester, which makes for a refreshing change given UK-based novels’ tendency towards a London setting.

Jinx Town begins by grounding the reader in the day-to-day life. Everything soon changes however when aliens begin invading the Earth, leaving devastation in their wake.

Principal character Jas is engaging and fascinating, with her science background being well used for the fantastical elements of the story. However, I felt many of the other characters were comparatively shallow. Taylor Arch, for example, felt like a Captain America.

Whilst the characters may have lacked substance, Sam Stone creates an evocative vision of post-apocalyptic England that readers will immediately become engrossed in. Her view ranges from the blighted cities to the stranded communities, before shifting focus entirely for the alien home world. These disparate settings work well and ensure that the reader never loses track of where they are.

In many ways, Jinx Town feels like The Walking Dead, replacing zombies with aliens and throwing in healthy doses of Mars Needs Women and Men are from Mars, Women are from Venus for good measure. Sam Stone has certainly created something uniquely original through disparate sources. Raymond E. Feist’s Magician and Empire series may also be an obvious influence, as the latter half of Jinx Town explores the culture and society of the aliens.

I have always enjoyed Sam Stone’s pacing, never sacrificing plot in order to belabour an emotional point. However, in the case of Jinx Town, I found the plot went too quickly. We only have a single chapter detailing Jas’s everyday life before the aliens attack, and I would have preferred more time to understand Jas before she is ripped out of her comfort zone.

There was also a massive jump in the narrative following the first wave of attacks by the aliens, which was disconcerting. Many of the characters had naturally changed over that time and we had missed a prime opportunity to witness the slow descent of civilisation.

Whilst Jinx Town is described as a science-fiction/fantasy, I would have described the novel as romance as well. At times, the romantic elements felt like they would not be out of place in a soap opera, with love-triangles and unrequited love, but they were nonetheless well handled and used to move the narrative forward. 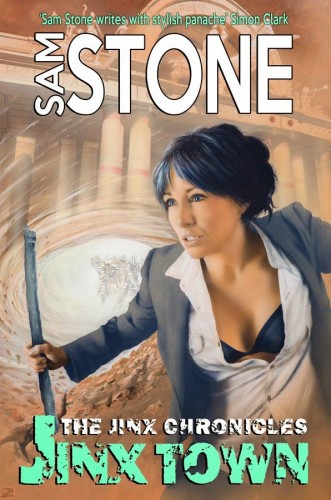 Science Fiction: the final frontier. These are the articles of the freelance journalist Peter Ray Allison. His continuing mission: to explore strange new realms of fiction, to seek out new genres and new visions of the future, to boldly geek where no one has geeked before.
More Goodness
aliensBookFantasy