Marvel Fact Files is a brand new magazine series published by Eaglemoss Collections, available to buy in stores next week. Here at Geek Pride, we were given a sneak peak of what’s in store.

The aim of the publication is to create an unparalleled collection of information spanning the entire Marvel Universe. Readers will receive various gifts in future such as a binder and dividers to help build up quite a collection.

The Marvel Fact Files are split up into seven sections; Avengers, X-Men, Spider-Man, Fantastic 4, Marvel Knights, Cosmic and Real Marvel. These sections will be split up in the binder which comes with issue two, using dividers featuring rather snazzy artwork provided in the third issue.

Each section then consists of several chapters to attempt to try and organise the mass amount of information offered each week. Sounds confusing? Well, it is a little, at first anyway. Mostly because they individual pages in each issue aren’t in any order, and you have to work that out. However, once you get your head around it, it’s a pretty neat little collection. 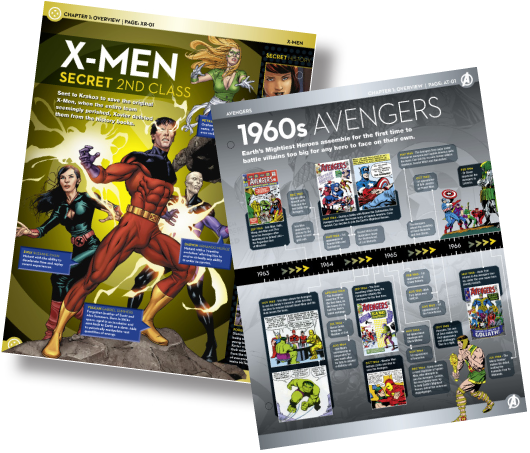 Real Marvel is split into four chapters; ‘Overview’ which offers a history of Marvel from 1939, ‘Writers and Artists’, ‘Evolutions’ which consists of stories behind popular characters and finally ‘Greatest Comics’, looking at comics that changed the industry forever. The over six sections of the collection concentrate on particular areas within the Marvel Universe and are split into simple chapters; ‘Overview’, ‘Heroes’, ‘Villains’, ‘Locations’ and ‘Technology’.

After taking a look at the first few issues on offer from Marvel Fact Files, I was pretty impressed with the amount of detail that’s gone into the series. It’s definitely a little messy at times, but there sheer amount of information offered in each section makes up for it. There are some fabulous fold out pages, such as a look at Iron Man or Spider-Man’s suit in great detail, which are a nice feature.

The amount of artwork spanning the entire Marvel timeline is great too, the pages are really packed with such a wide range of graphics. The Real Marvel (or ‘Marvel Universe’ in some issues) section is definitely my favourite part of the collection. This part of the magazine features artist and writer profiles, detailed looks at specific comic book issues and more. It’s really something for a true Marvel geek rather than a casual reader. 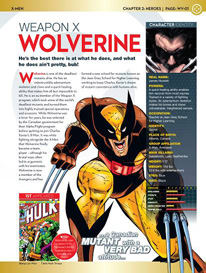 Overall, the Marvel Fact Files is a rather decent collection for a Marvel fan, but don’t expect heaps of new information. It’s moderately priced at £2.50 per weekly issue, but you have to wait until issue two for your binder, then issue three for any dividers. If you don’t have those, or miss an issue, it’s pretty messy.

If you’re really interested, the subscription would be a worthwhile investment. You receive your usual freebies, along with a T-Shirt, tin plate replica of Fantastic Four #1 cover and an Iron Man and Spider-Man figure. There’s also the interactive online edition available for subscribers, which might be a handier way of storing your collection.

I did enjoy the Marvel Fact Files collection, at least what I’ve seen of it so far. However, Marvel Encyclopaedia’s are pretty easy to come by and the information offered is very similar. That said, this is a decent collection and it’s a different way to store your geekiness. The first issue goes on sale next week at a special price of only 99p, so I’d definitely recommend checking it out at that price. Even if it’s just for the pretty pictures. 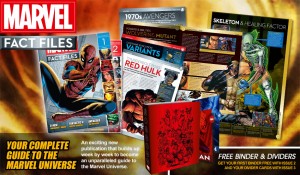 I'm an aspiring film journalist living in Chester. Into all kinds of geekery from N64 to Xbox, graphic novels, cosplay anime and more. I have an unhealthy obsession with Pokémon and the Legend of Zelda series. So much so that I have two Zelda tattoos and various Pokémon lurking all over my house. In my spare time when I'm not busy being a real person and working, I'm writing or making retro games jewellery. I'm also obsessed with pandas. They're fabulous.
More Goodness
breakingcomic bookiron man