by Cristina Bogdan on 13/12/2020
Details
PublishersComicsTitan
By

Sometimes the story felt a little rushed and the resolution too quick.

Definitely worth a read, for both old fans of the series and for those that want to get into the Rivers of London Universe.

The Fey and the Furious is the 8th installment in the comic book series Rivers of London, brought to us by Ben Aaronovitch and Andrew Cartmel.

The book follows the misadventures of detective Peter Grant, that readers will recognized both from previous issues of the comic book series and from the books that brought new life to the fantasy genre. In this particular instance Peter ends up undercover as a street racer, which is a nice nod to the series that made Vin Diesel famous, and a lot of kids dream about driving at insane speeds through the city. 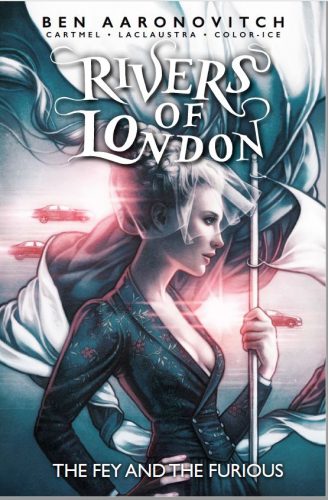 Unlike Vin Diesel, however, Peter has to rely on magic and all of the allies he has. Why? Because Peter Grant is definitely not a natural behind the wheel of a sports car, despite all of his posturing. Still, he definitely enjoys going the extra mile in order to win the race that would help him solve the puzzling appearance of a British car, filled with unicorn horns, and its driver on the shores of the Netherlands. They had 0 business being there, together or otherwise, after all.

What you should know?

If you are one of those still unfamiliar with this world, the 8th volume offers a quick recap of the main events that Peter Grant was involved with, as well as a handy profile page to bring you up to speed with the most important characters. You get to see what their abilities are and the relationship between them. I still recommend reading the previous comics, even if this book works as a standalone too. While it does help to know more about the mythology of this universe, picking The Fey and the Furious up will not make you feel like you are excluded from the cool kids’ table.

One of the things that I like about Rivers of London in general and The Fey and The Furious in particular is that the saying ‘Modern problems require modern solutions’ definitely applies to it. While the fact that the fair folk is involved in illegal street racing is something that might raise eyebrows, for those that are familiar with more classic views of the fantasy and magic, I think that any self-respecting magical creature would learn to adapt to the new world and, if they can get their fingers in a particularly juicy pie, they just might.

A definite point in favour of this book is the realism of the fact that Peter is absolutely down to solve things using his wit when magic fails and he is not afraid to run when he knows he has no chances of winning. Like fighting with an extremely angry Fairy Queen, whose clutches he already escaped once, courtesy of Beverley Brook an incredibly smart and beautiful godess who just happens to love Peter.

Is the book worth a read?

That being said, I absolutely loved this book. I found myself thinking that it would be maybe a bit too much Fast and Furious to my liking, but I ended up devouring the pages, needing to know NOW what comes next. It is witty, it is funny and it manages to keep itself from becoming pretentious, at the same time. The side characters, while given little time to shine still manage to feel real and the book does make a point to illustrate just what makes people get involved in car racing, even if it might mean certain death for some, or losing everything else that is important. Addiction is not only drugs and alcohol, kids. 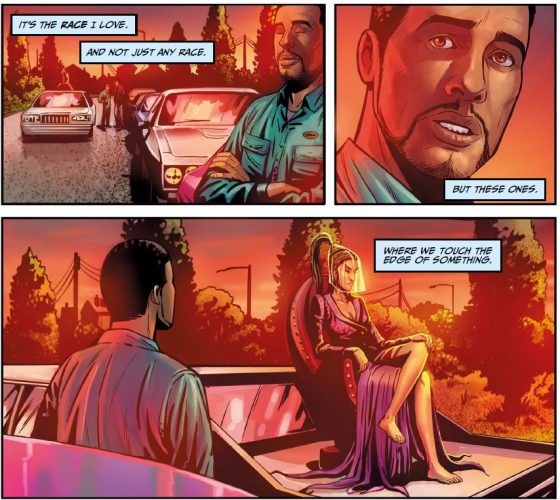 What else is there?

At the volume’s end a history of car racing is also available, mostly detailing how and why the phenomenon appeared. If you think it’s a particularly novel invention, you could not be further from the truth, but I will let you discover that for yourselves. Aside from that, the additional material also provides details about the Fairies and their history in Britain, as well as a brief history of unicorns. All elements that appear in the book and that might have piqued the interest of readers. It definitely taught me things I had little to no idea about.

You also get to enjoy some ‘Tales from …’; one page comics about 4 characters that do not appear in The Fey and the Furious :

These are incredibly funny and offer a nice behind the scenes view of the characters that we all know and love.

Who is behind it all?

A comic is more than the words of its author and that is not different for The Fey and the Furious. The book would not have been the same (or at all) without the amazing artwork of Lee Sullivan and Mariano Laclaustra who have outdone themselves. Paulina Vassileva, Color-Ice (colours) and Rob Steen (letttering) have also contributed to the final product. Each little element fits perfectly to bring you a story of magic and mundane, all rolled into one.

While it has been a while since I picked up Rivers of London, this has definitely re-awakened my appetite for the stories of Peter Grant, Thomas Nightingale and everyone else at the Folly. After all, where else would I find gems like this?

All in all, this is a definite read for fans of the series, who will be happy that they waited for all the issues to be compiled in a nice volume. To  be honest, having to wait to see the resolution issue by issue would have driven me up the wall. And if you are a beginner when it comes to this universe, fret not, this will be a nice introduction that will definitely make you want to know more about it. If you would like to learn more about this world, you can check out Ben Aaronovitch’s oficial page.

What's there to say about me? I love the sci-fi and fantasy genre when I read, but I am in no way limited to that alone. I do think Frank Herbert deserves a statue for his writing(if there is one, point me in that direction, please). I enjoy writing quite a lot, but I am also kinda lazy. If you want to make me happy give me books or Doctor Who collectibles. Or a real TARDIS, in which case I will love you forever.
More Goodness
Rivers of LondonRob Steen.Titan Comics