Misleading title will confuse and disappoint some.

Simon reflects on his retirement with Annabelle the club owner and receives a gift from a mysterious benefactor. The Old Man makes a disturbing point and Keenan has a plan for his package.

It’s hard to tell whether ‘Sex’ was just intended to be an attention grabbing title or maybe even an ironic statement as this issue unfolds.

Simon the repressed and now retired former protector of Saturn City doesn’t seem too convinced about this whole retirement thing and neither does Annabelle who it is revealed used to be ‘Shadow Lynx’ before she gave up her life of crime and became a club owner. 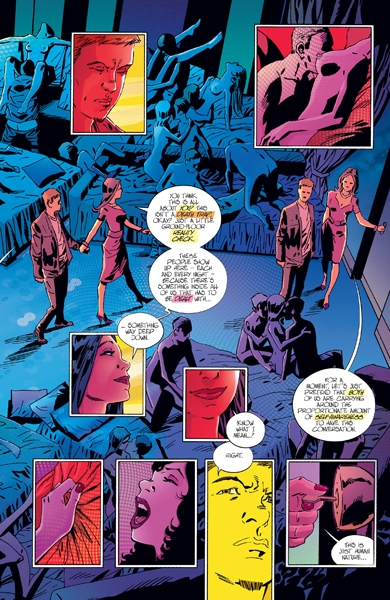 A bewildered Simon is lead on.

A flashback scene with Keenan provides a jolt of action as he is seen blazing down a road on his bike trying to evade some pursuers vaulting over cars with a mystery package in his backpack.

Whilst The Old Man features in one of the most disturbing scenes so far whilst making a point to two of his heavies.

There’s plenty of potential here and it’s intriguing as to where this story is headed and how these characters relate to each other and the ending of this issue leaves questions to be answered.

The art from Piotr Kowalski is good if not overly detailed and Brad Simpsons colours really make some of the panels pop especially the sequence with Keenan. 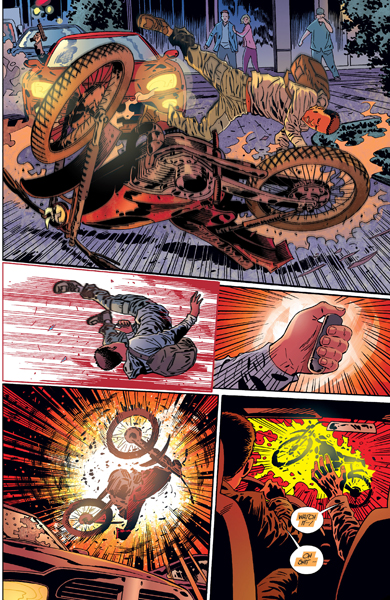 Keenan makes a break for it.

For something that’s bold enough to call itself ‘Sex’, it really isn’t anywhere near as explicit as you would think. The two page spread of Simon walking through the club is rendered in shadow and lacking any real detail. It’s as if the idea of featuring explicit sex and an engrossing story is somehow not possible or breaking the rules. Several other titles feature far more explicit representations of sex Avatar’s Ferals being one of them so anyone expecting a Druuna style affair here will be rather disappointed.

Andy Haigh started writing to counteract the brain atrophying effects of Retail Hell, now it's an addiction. Andy is an unrepentant sequential art absorbist and comics are one of his passions. Other interests include Film, Music, Science Fiction and Horror novels and quality TV like Game of Thrones. He can talk about these at great length if only someone would listen. He lives a somewhat hermit like life in The Shire, spends too much time on social media and is still waiting to go on an adventure.
More Goodness
comicsImage ComicsPiotr Kowalski