previous
Kickstart this - A Crowdfunding round up.
random
next
Eisenhorn: Xenos, Issue Zero - Meet the Inquisitor, before being the Inquisitor!
Books and Comics
0 likes

Soaring Penguin Press will publish in the later part of 2017, Boum’s A Small Revolution. The original text La petite revolution was published in 2012, in French and is currently available in on the author’s page. I had a look and I definitely liked what I saw. For those that do not speak French (shame on you!) the bilingual version of La petite révolution is available.

The comic by Samantha Leriche-Gionet (Boum) was nominated this year for an Outstanding Online Comic Ignatz award and, according to the author herself, it “is a story of dictatorship and revolution as seen through the eyes of a little girl, and her love for Boris Vian’s music.” And no wonder Florence enjoyed this song, it’s perfectly fitting to a world of poverty and dictatorship.

It’s not the only award that La petite revolution was nominated for. In 2012, it was a contender for the or the Best Independent Comic Award at the 2012 Bédélys Awards. 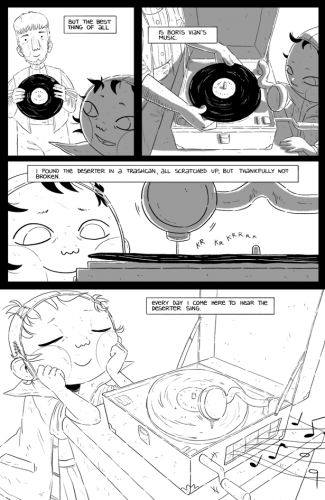 The author, living in Montreal, Canada has made a name for herself through her comics and her animated shorts that have been screened worldwide. A devoted mother of two, Boum still finds the time to illustrate children’s books and working on several comic book projects as well.

Keep an eye out for A small revolution next year and, if you are as impatient as I am, take a look at this page and feast your eyes on the magic of A Small Revolution.

What's there to say about me? I love the sci-fi and fantasy genre when I read, but I am in no way limited to that alone. I do think Frank Herbert deserves a statue for his writing(if there is one, point me in that direction, please). I enjoy writing quite a lot, but I am also kinda lazy. If you want to make me happy give me books or Doctor Who collectibles. Or a real TARDIS, in which case I will love you forever.
More Goodness
Canadacomic booksoaring penguin press

Make The Most Of Your Netflix Subscription