Very dialogue heavy which may not be for everyone.

The I.U team get closer to tracking down the last known whereabouts of Professor Sarlat and getting to the truth behind the mysterious deaths. Starck and Bronson have a disagreement and Jered is still plagued by his night with a Wire Head.

David Hine’s Storm Dogs continues to impress on every level and packs more ideas into one issue than half the DC52 put together. Science Fiction that engages a modern audience is hard to pull off without it seeming derivative but Hine pulls this off with ease and even better doesn’t patronise his readers by pointing out the obvious along the way.

For the unfamiliar Storm Dogs is set on the primitive world of Amaranth which is home to two sentient symbiotic species the Elohi and the Joppa as well as being host to numerous other flaura and fauna. Amaranth is also subject to deadly ‘acid storms’ which most of the indigenous life forms have developed a natural immunity to, but which have a potently corrosive effect on human flesh.

The team has been sent from the Intergalactic Union of which Amaranth has always been a vocal opponent to. The I. U. team are used to having impressive technology at their disposal with a vast neural network referred to as ‘The Weave’ being used for communication across vast distances amongst other things.

The team is made up of an interesting mix of characters Professor Miska Zenda an anthropologist and expert in languages and cultures, Doctor Jered Hofman a forensic pathologist specialising in alien physiology, Trooper Siam Locke a weapons specialist and Commander Cassandra Burroughs.

Their on world liason is the grizzled Curtess Starck the Sheriff of the human settlement and his deputy Bronson.

The Arcana mining corporation also has a presence on Amaranth. 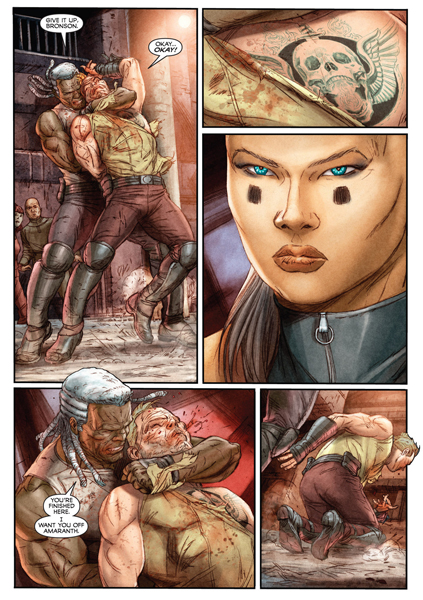 Starck and Bronson’s brawl comes to a bloody end.

Amaranth also has a protected status due to the primitive and tribal culture of the Elohi and Joppa. This means there is no advanced technology allowed and no access to ‘The Weave’.

Originally sent to investigate a series of murders on the backwater planet last issue it was revealed via flashback that Bronson was involved in the death of a pair of Elohi and and an accompanying Joppa. The only witness to this met an untimely end whilst in his custody hiding out in a cave with the team, whilst taking shelter from an acid storm.

There is no proof of this but that doesn’t stop Starck getting into a punishing fist fight with Bronson back at the settlement which Burroughs walks in on. Bronson seems to have the edge on Starck, Siam points out that Bronson has a bionic arm which promptly gets mangled after Bronson hits a wall due to Starck dodging a blow. ‘I wouldn’t have got into a fist fight with that sonofabitch if I thought you were wrong’ says Starck to Burroughs voicing what all the team has been thinking.

This is just one of numerous examples of Hines impressive character work, Starck may have initially seemed to view Burroughs and her team as interfering outsiders but after what he’s seen he’s willing to go up against his right hand man.

Meanwhile in the downtown area Jered plagued by thoughts of spending the night with a Wire Head, visits the Head Trip centre (which is in complete defiance of I.U rules about technology). Where for a price you can transfer your consciousness to a number of hosts to experience things that might otherwise be frowned upon, whether it’s eating, self harm or sex. It’s a blending of ideas seen in Strange Days and Avatar but put to far more disturbing use. The voice over which details these different services is pure Phillip K Dick. 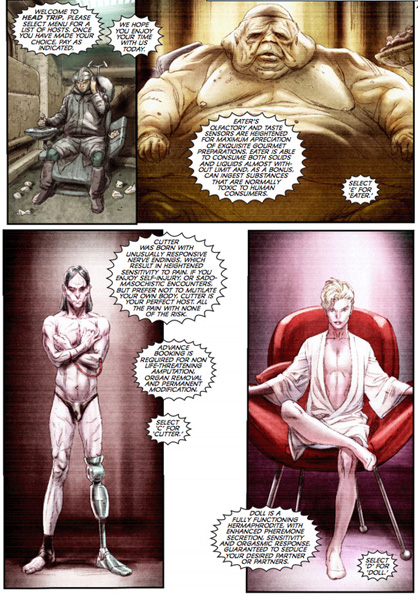 Elsewhere Kaneko director of the Arcana mining station on Amaranth continues her brutal interrogation of her Elohi and Joppa captives with their torturer being a member of a race with a collective hive intelligence who fails to grasp the importance of individuals or the finality of death since they are alien concepts to him.

The other plot thread playing out is Miska, Burroughs and Starck heading out to track down the last known whereabouts of Professor Sarlat who was living among the Elohi.

The relationship between the Joppa and the Elohi is deftly handled with the Joppa interpreting for the Elohi who have no spoken language. This leads to speculation amongst the party, with them all debating how they communicate. Psychic communication would have been the easy way out but Hines is more grounded as it’s revealed that the Elohi and Joppa communicate via minute eye movements or facial twitches.

This feeds into the tribal nature of the Elohi and Joppa and is further layered when the women on the team are allowed access to Sarlat’s former home but Starck and the Joppa are not.

Hines ability to juggle numerous different plot threads and various characters but never losing focus on any of the unfolding events is impressive. This story telling is brought to life with the stunning art of Doug Braithwaite who seems capable of handling anything with ease whether it’s alien life forms, landscapes, the bustling outpost, the Elohi camp or kinetic action, as seen with the fist fight that begins this issue. This is all rendered with an impressive detail, like the inner workings of Bronson’s busted bionic arm, Salem’s bionic eyes, which are indistinguishable from the norm besides their colour and the detail on her corneas or the detail of the Elohi camp.

Characters are easily distinguishable, memorable and their design says a lot about their backgrounds. Starck’s rough and rugged appearance indicative of his days having to keep control of the unruly settlement on Amaranth, Salem looking both intelligent but a clearly a capable soldier where as Miska’s scholarly nature is clear from her refined appearance.

Each issue also has an extensive character profile for one of the main characters featured in the story including an insight in the characters design with sketches from Braithwaite.

If you like intelligent science fiction you should be reading this.

Andy Haigh started writing to counteract the brain atrophying effects of Retail Hell, now it's an addiction. Andy is an unrepentant sequential art absorbist and comics are one of his passions. Other interests include Film, Music, Science Fiction and Horror novels and quality TV like Game of Thrones. He can talk about these at great length if only someone would listen. He lives a somewhat hermit like life in The Shire, spends too much time on social media and is still waiting to go on an adventure.
More Goodness
comicsDavid HineImage Comics