That cover art, seriously what is going on there? Anyone? The Scarecrow being used as a macguffin just for that conversation to happen.

Great to see some inhabitants of Metropolis that aren't just background fodder. That conversation with Superman. Scarecrow getting well and truly owned. That ending is intriguing.

Swamp Thing, under the effects of Scarecrow‘s fear toxin, is trapped in a nightmare and his connection with The Green is wreaking havoc in Metropolis- which gets the attention of Superman.

The start of this issue depicts Alec Holland in a perfect life, his love Abby by his side and a daughter, only for it to turn to ashes. It’s a powerful intro that shows what he has sacrificed and also what Holland fears the most that he has no humanity left and is just a monster. 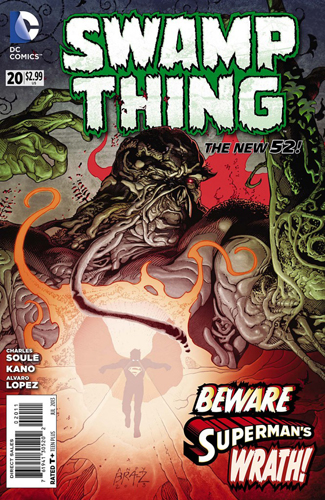 Whilst Holland may be experiencing a nightmare, Metropolis is experiencing its own as the streets and buildings are choking with wild foliage as Holland’s powers react to his mental anguish.

A team of fire fighters is having to deal with the rampant vines that are filling the streets and constricting buildings. It’s a refreshing change to see some civilian faces who aren’t victims, the reality of the situation is made clear when one of them points out how calls are coming in from all over Metropolis.

Superman soon appears on the scene to assist the fire fighters, but in a great endearing character moment one of them non-chalantly asks “Do you know what it is this time? These plants? Is this one of your…. battles or whatever?” and then rebuffs his reply with a “Whatever just get up there and do what you do”.

This exchange is one of the best things in this issue for all the things it says between the lines, Superman is such a regular sight that he doesn’t even phase the Fire Fighters but also the indifferent dismissal he gets speaks to the seen it all mentality of being an emergency responder in Metropolis.

As Holland’s nightmares deepen so does the chaos in Metropolis, with a bridge collapsing under the weight of huge vines forcing Superman to act when he finds Holland.

There are some interesting ideas revealed in the conversation between the two as Holland asks Superman how he deals with his immense power and why he acts like a human when he’s clearly not. Superman’s response of “we’re not monsters. We can be as human as we want to be” ties into Hollands nightmares and his mental turmoil.

There’s an intriguing end to this issue too with Holland encountering a mysterious stranger. 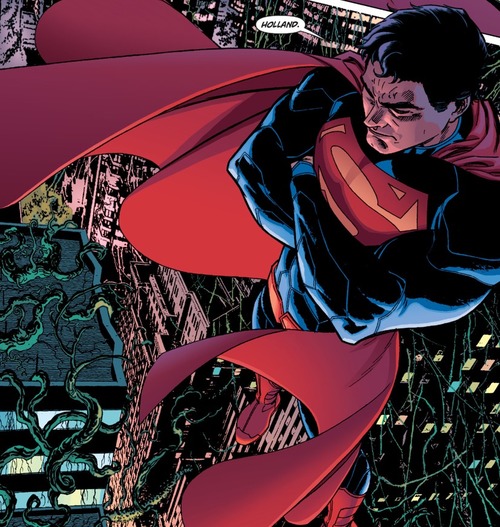 Kano has established himself pretty well on this title and here his endearingly human Swamp Thing, with clear emotion being visible in his amber eyes and his horror at realising the carnage he has wrought, re-inforces that Holland isn’t the monster his appearance would imply.

Scarecrow is essentially used as a comedic device as he tries to sneak off only to be pinned to a wall by Swamp Thing’s arm, now changed into a massive vine. It’s a great sequence, the overhead shot, showing Holland hasn’t even moved and is still conversing with Superman is one of the best panels in this issue. It’s amusing but more importantly reasserts Swamp Thing’s power and just how insignificant Scarecrow is to him.

It does seem though that Scarecrow was used as a macguffin for Holland’s epiphany and grounds for a meet up with Superman.

By far the worst thing for the second time in a row is the awful cover from Andy Brase, which actually makes last months look good. Charles Soule‘s efforts are being hamstrung by a cover that seems to feature a winking Swamp Thing and a child running around in a Superman outfit.

Considering how consistently impressive Yanick Paquette‘s work was on Scott Snyder‘s run on the title both complimenting the story and being good art it seems like Soule is getting a raw deal at the moment.

Andy Haigh started writing to counteract the brain atrophying effects of Retail Hell, now it's an addiction. Andy is an unrepentant sequential art absorbist and comics are one of his passions. Other interests include Film, Music, Science Fiction and Horror novels and quality TV like Game of Thrones. He can talk about these at great length if only someone would listen. He lives a somewhat hermit like life in The Shire, spends too much time on social media and is still waiting to go on an adventure.
More Goodness
comic bookcomic bookscomics