A lack of Swamp Thing might be a problem for some.

It's Swamp Thing but not as you know it. An intriguing and engrossing story. 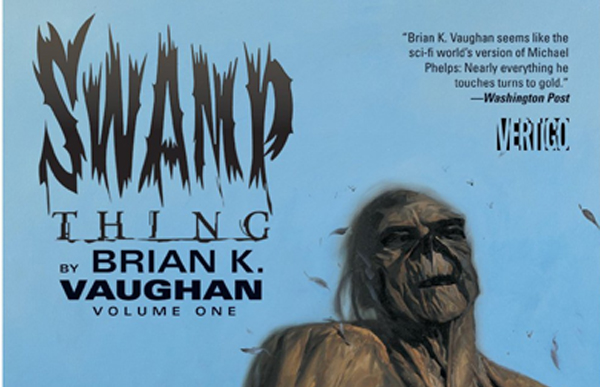 Brian K Vaughan is a big name in the world of comics now, being the writer of Image Comics’ smash hit ‘Saga’ and ‘Y The Last Man’ for Vertigo amongst others. Something which isn’t generally associated with Vaughan is Swamp Thing, written before he became a widely acclaimed writer. Back in 2000, Vaughan wrote an interesting take on the title, which ran for 20 issues, the first part of which is collected here for the first time.

The most immediate thing about Vaughan’s Swamp Thing is that for the most part Swamp Thing himself barely features in the story. The story focuses on the ‘daughter’ of Swamp Thing and Abigail ‘Abby’ Holland, Tefe.

The background for Tefe is a little on the muddled side, especially for those not familiar with older Swamp Thing stories. In a previous Swamp Thing arc, the Parliament of Trees thinking Alec Holland aka Swamp Thing dead, created the seed of another avatar to take his place. Swamp Thing’s return caused a problem, since there can’t be two avatars of The Green. The Parliament orders Swamp Thing to kill the seed, now dubbed Sprout, but he refuses. To get around this, Swamp Thing calls on John Constantine and through ritual magic possesses 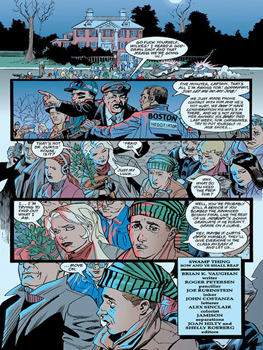 his body, to father a child with Abigail, incorporating the life essence of Sprout, thus avoiding having to kill his replacement. Complications arise though due to Constantine’s demon blood, meaning Tefe not only has the power to control plant life, but can also manipulate flesh.

Tefe is immensely powerful and doesn’t know how to control her powers despite Swmap Thing’s best efforts to teach her. She is manipulated by The Green, which was imbalanced, into thinking humanity should be wiped out. In order to try and prevent this and curtail Tefe’s immense power, Abby and Swamp Thing call on Constantine again. Out of desperation, they have Constantine wipe Tefe’s memories and opt to switch her conciousness into the body of another older girl who is terminally ill. Tefe, upon awakening, thinks she is now Mary Conway and her parents think she has miraculously recovered from her illness.

Problems arise when Tefe’s old memories and powers come bubbling back up to the surface when she attends her prom and finds her boyfriend cheating on her.

Tefe turns her back on her old life and embarks on a voyage of self discovery to try and figure out who she is and to see if humanity really is worth saving.

There’s an interesting narrative structure, with the story being narrated by various characters whether it’s Abby, Swamp Thing, Tefe or one of the others. One story has a narration from The Grass, revealing The Green’s contempt for humanity. ‘We are ever present spies. We are camouflage voyeurs. We are The Grass’.

There are plenty of memorable moments too, with flashbacks to the younger Tefe, as Abby confesses her and Swamp Thing’s plan to 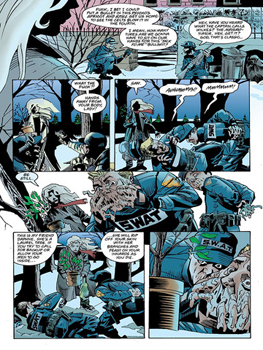 Mary’s parents (explaining the rather convoluted backstory too). Discovering that the young Tefe has killed a group of loggers, by fusing their hands and feet together, and strung them up like paper dolls is what sends them on their path to Constantine.

As an indicator that this isn’t your average story of someone finding themselves, Tefe carries with her a small potted Laurel Tree, that she names Daphne. On her travels Tefe meets up with other wayward souls, who are outcasts in one way or another. Of course, none of them believe her story until she uses her powers. One scene has Tefe reviving a dying Impala in a safari park experimenting with her powers. A later story has Tefe saving a family from a forest fire at great cost to The Green only to then discover that they are the ones responsible for the fire kicking off a chain reaction of events.

There’s a distinct moral ambiguity at work in Tefe’s character. Growing up isolated in the swamp with only her parents for company she has little understanding of social norms and has little patience for people and views them with contempt. Her companions of course just think she’s a bit crazy. As the story progresses Tefe can’t decide whether to side with The Green or not and goes on a quest to find the ‘Tree of Knowledge’.

Following Tefe’s adventures is intriguing and features the same level of characterisation that has become one of Vaughan’s signatures as the conflicted elemental goes about her voyage of discovery.

Roger Petersen, along with the rest of the large art team, handles things well, both the mundane and the more disturbing elements being well executed. The image of Tefe fusing swat officers hands to their faces and their mouths together is just one example of how her powers manifest.

It might not be Swamp Thing as you know it but Vaughan’s talent is definitely evident here.

Andy Haigh started writing to counteract the brain atrophying effects of Retail Hell, now it's an addiction. Andy is an unrepentant sequential art absorbist and comics are one of his passions. Other interests include Film, Music, Science Fiction and Horror novels and quality TV like Game of Thrones. He can talk about these at great length if only someone would listen. He lives a somewhat hermit like life in The Shire, spends too much time on social media and is still waiting to go on an adventure.
More Goodness
breakingBrian K Vaughancomics