The Clockwork Princess Manga is out! 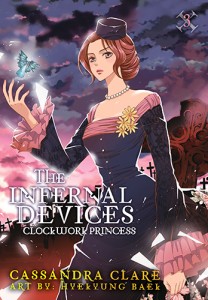 For the Cassandra Clare fans this news will bring lots of joy, considering the success of her best-selling series of book, The Mortal Instruments and the prequel The Infernal Devices. According to the press release the third instalment in the series, featuring the well-known characters of the books is going to be released soon, the publishing date already having passed, July the 22nd of this year. At only 7,99 £ it seems like quite a bargain. Here’s what we can expect from it:

Danger and betrayal, secrets and enchantment in the thrilling conclusion to the number one New York Times bestselling Infernal Devices trilogy, a prequel series to the Mortal Instruments. See Cassandra Clare’s characters brought to life in this breathtakingly beautiful manga adaptation. A net of shadows tightens around the Shadowhunters of the London Institute. Mortmain plans to use his Infernal Devices, an army of pitiless automatons, to destroy them. He needs only one last item to complete his plan: he needs Tessa Gray. When Mortmain abducts Tessa, the boys who lay equal claim to her heart, Jem and Will, will do anything to save her. For though Tessa and Jem are now engaged, Will is as much in love with her as ever. Danger and betrayal, secrets and enchantment, and the tangled threads of love and loss intertwine as the Shadowhunters are pushed to the very brink of destruction in this breathtaking conclusion to the Infernal Devices trilogy.

The first two titles: Clockwork Angel and Clockwork Prince are also available for purchase, something that I am sure many of the book’s fans will be happy to learn.

What's there to say about me? I love the sci-fi and fantasy genre when I read, but I am in no way limited to that alone. I do think Frank Herbert deserves a statue for his writing(if there is one, point me in that direction, please). I enjoy writing quite a lot, but I am also kinda lazy. If you want to make me happy give me books or Doctor Who collectibles. Or a real TARDIS, in which case I will love you forever.
More Goodness
cassandra clareclockwork angelclockwork prince