Girlpower, literally. A sense of fun absent from many titles. Great character designs.

t's Marvel so this could rapidly become entangled in some 'event'.

Valkyrie Misty Knight – a resurrected Hippolyta sent by Hela – and archaeologist Annabelle face the Doom Maidens’ ancient Valkyrior who’s driven mad by power and bloodlust as they attempt to rescue Dani Moonstar Hel’s Valkyrie, who’s energy has been used to awaken the Doom Maidens as part of a plan by the mysterious Mr. Raven and Caroline Le Fay.

Whilst DC might be in the lead when it comes to the number of female-fronted comics they’re producing, Marvel‘s The Fearless Defenders leaves them all choking in the dust as Cullen Bunn and friends show how to pull off an all-female title with style.

One of the most immediate things about The Fearless Defenders is that despite this being an all-woman team, there’s no pandering to the sexy. This isn’t scantily-clad heroes fighting it out for the viewing pleasure of the hormonally crazed male demographic.

Sure Valkyrie and Hippolyta might look radiant, but they’re legendary immortals so that’s pretty much a given and Misty Knight despite originally being inspired by the Blaxploitation and Kung Fu craze of the seventies comes across as fierce and intelligent.

Hippolyta gets a wake up call. 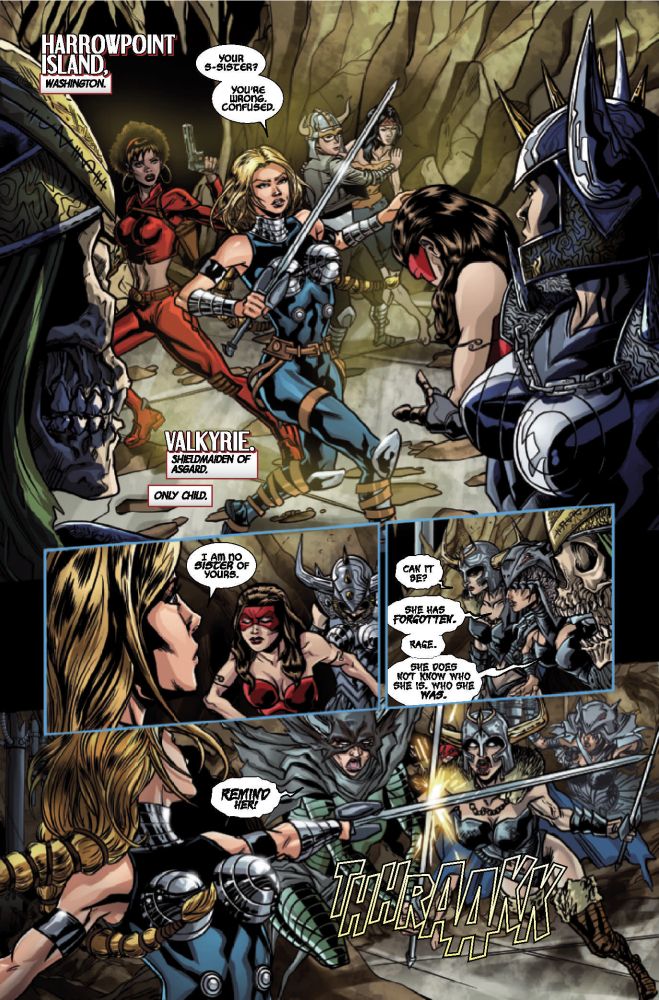 It’s interesting to note that so far in the title the only male character of note to appear is Odin via a flashback. It’s been distinctly X chromosomes all the way since issue 1, and not only only that but these characters are all powerful and independent – it’s been a girlpower roll-call, but without the base crassness that such a phrase implies.

Despite being a teens-and-up title I really hope this is a hit with younger girl readers because with all the sex, darkness and messed-up stuff going on in comicdom (that’s you DC) Hippolyta, Valkyrie and the rest of the team make for great figures to look up to.

All this would make The Fearless Defenders better than a lot of titles that have a much wider readership, but it gets better; Annabelle the archaeologist, a friend of Misty’s, likes girls and has a crush on Valkyrie but this isn’t handled in a clumsy hot lesbo action manner – it adds another layer to an everyman or rather everywoman character for the reader to relate to, seeing her confusion and surprise as she finds out she has been selected as a shield maiden by the All Mother of Asgard just makes you love this character even more.

Odin as featured in flashback.

What this title deals in is what seems to be majorly lacking in a lot of titles – fun. It’s packed with punchy dialogue and great characters that bounce off each other, and kudos to writer Cullen Bunn for pulling it off with gusto and even managing to include words like ‘vexatious’. Look it up.

Art-wise Will Sliney and Veronica Gandini make for a good team, the action is clear and kinetic and panels like one with Hippolyta looking down from above after taking flight make for an interesting change of perspective. A flashback to Valkyrie’s past is great stuff, a confrontation between Hippolyta and Dani suiting up in her valkyrie armour all shining gold and winged helm really crackles with energy and there’s a great full page ‘holy shit’ moment at the mid point.

Credit must also go to Mark Brooks for his inventive and impressive covers.

Andy Haigh started writing to counteract the brain atrophying effects of Retail Hell, now it's an addiction. Andy is an unrepentant sequential art absorbist and comics are one of his passions. Other interests include Film, Music, Science Fiction and Horror novels and quality TV like Game of Thrones. He can talk about these at great length if only someone would listen. He lives a somewhat hermit like life in The Shire, spends too much time on social media and is still waiting to go on an adventure.
More Goodness
breakingcomiccomics