Thor To Be Gender-Swapped In October

Earlier today it was announced by Marvel execs that the Legendary Thor will step down from his position as Thunder God and be replaced by a female counterpart who will take his name.Series writer Jason Aaron, keen to dispel any rumours, stated online that: 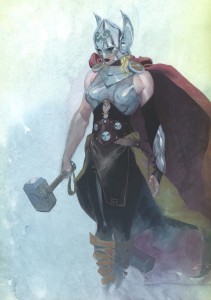 With only three previous characters wielding Thor’s hammer Mjolnir previously (four if you count Superman), Marvel are remaining incredibly tight-lipped about who the new Thor is, and the storyline surrounding her rise to Godhood:

“This October, Marvel Comics evolves once again in one of the most shocking and exciting changes ever to shake one of Marvel’s “big three” – Captain American, Iron Man and Thor – Marvel Comics will be introducing an all-new THOR, GOD OF THUNDER. No longer is the classic male hero able to hold the mighty hammer, Mjölnir, a brand new female hero will emerge will who will be worthy of the name THOR. Who is she? Where did she come from and what is her connection to Asgard and the Marvel Universe?”

This has seen the second massive shake up of Marvel’s “Big Three” , with Steve Rogers retiring later in the year. Whether this is part of an overarching plot we have yet to see. We can only wait to see if we will hear some about any major changes to Iron Man come Autumn, completing the triumvirate.

Hailing from Kent, England, Mike is a writer, editor and podcaster who has just finished his degree at CCCU. He also is a drummer of 11+years, plays in several bands, and is available for session work. His other interests are Batman, music which doesn't suck and pizza. Follow Mike @The_Dark_Mike
More Goodness
breakingCaptain Americairon man