Travelling the Old World with Gotrek and Felix 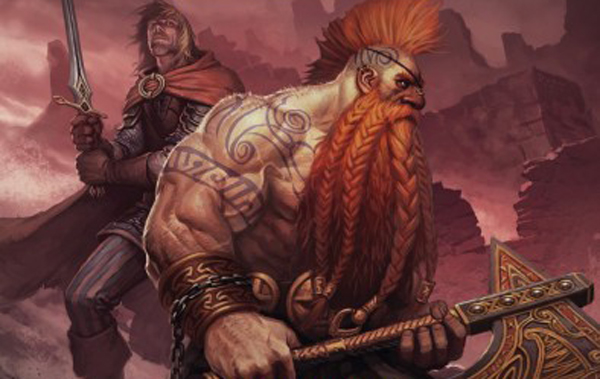 Back through the mists of time I used to play Warhammer ( the fantasy tabletop game popularised by Games Workshop for those of you born last week),  this was back in the day before you had to be selling meth out of an RV to be able to afford it.

Army books were packed full of the details of a given race in the Warhammer game but would also feature mythology in the way of stories. Some of these stories were based on the adventures of an unlikely pair of characters that would go on to be arguably the most well known characters of the whole Warhammer setting they’re names were Gotrek Gurnisson and Felix Jaegar.

Gotrek is a dwarf Trollslayer and Felix is a human poet and adventurer. Gotrek had become a Trollslayer after performing some unmentioned shameful act in his past and was now seeking an honourable death against a worthy foe. Felix had become his partner after a fateful drinking binge that lead to him making a blood-oath with the Dwarf to record his adventures and his heroic death and if there’s one things dwarves take seriously it’s blood-oaths. 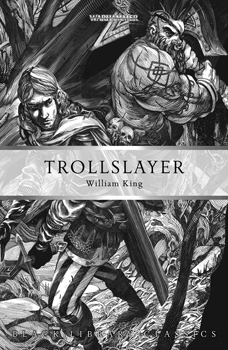 that the games were based in. One of their earliest published book series were the Gotrek and Felix books- dedicated to the pair’s adventures in the Old World and it quickly became a flagship for their Warhammer output.

The books are an excellent example of accessible fantasy which slowly builds its own mythology. Making good use of the classic trope of the odd couple.  Many of the books are prefaced by a commentary by Felix as though they are taken from the books he has written of their travels together.

Gotrek Gurnisson is the best or worst slayer ever depending on your perspective and it’s a sort of running self-aware joke. The slayer is stubborn, sullen, prone to mood swings, and like most if not all dwarves is a big fan of ale and isn’t quick to trust other races.

Throughout his adventures Gotrek Gurnisson has fought with Orcs, Goblins, Skaven, Trolls, Chaos warlords and sorcerers, Vampire Counts, The Undead, Beastmen, Dark Elves and even a Bloodthirster of Khorne amongst others. Whilst Gotrek has the inherent toughness of all dwarves, his longevity is seemingly derived from his rune axe. Gotrek’s axe is ancient and possessed of potent rune magic, he found it in the possession of the dead son of King Thangrim Firebeard in an ill fated excursion to the Chaos Wastes. High Elf mage Teclis reading the aura of the slayer at one point noted that the power of the axe had changed the slayer from a mere hardy dwarf into something else explaining his longevity and resilience.

Felix in contrast to the taciturn slayer is often pragmatic and is a hopeless romantic at heart. Whilst he doesn’t share Gotrek’s sheer ferocity and fearlessness in battle he is an accomplished swordsman and has his own powerful weapon in the form of Karaghul, a sword imbued with magical properties that he found in Karag Eight Peaks. They first met during a riot in the city of Altdorf where the slayer saved the poet’s life from the Reiksguard prior to their drinking binge which resulted in the blood-oath. Imperial Wizard Max Schreiber comments that Felix’s prolonged exposure to the powerful rune magic of Gotrek’s axe amongst other things have also imbued him with vitality beyond that of a normal man. 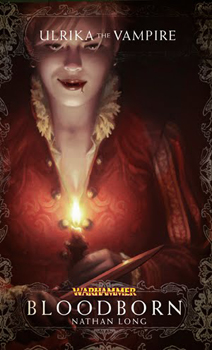 Despite his many fights the only lasting injury Gotrek has suffered is the loss of an eye whilst fighting a horde of Goblins with his eyepatch just adding to his already intimidating appearance.

The pair have travelled throughout the Old World but made a home of sorts in Nuln in a tavern named “The Blind Pig” run by a former soldier friend of Gotrek’s named Big Heinz. Gotrek acts as  bouncer with his intimidating appearance and notoriety being both a blessing and a curse for the landlord.

The books have also featured several memorable supporting characters like the genius but also quite mad Dwarf engineer and inventor Malakai Makaisson, Snorri Nosebiter a courageous but dimwitted slayer and old friend of Gotrek’s with a habit of referring to himself in the third person, Max Schrieber a powerful Imperial Wizard and scholar and also a love rival of Felix, Ulrika Magdova a former Kislevite noble now vampire who was formerly Felix’s lover and Greyseer Thanquol a powerful Skaven sorcerer who is one of the few enemies to face the pair and survive.

Grey Seer Thanquol and Ulrika Magdova had their own trilogies spun out from their appearances in Gotrek and Felix with the former being set in the scheming world of the Skaven and the latter telling the tale of Ulrika’s struggle with her new life as a Vampire being determined not to become an evil fiend despite her affliction, the award winning Ulrika The Vampire trilogy is written by Nathan Long with Thanquol’s being written by C.L Werner.

The first seven Gotrek and Felix books were written by William King with Nathan Long taking over with book number eight and writing five further books in the series. After Long’s last book new entries in the series became more infrequent with different writers, Josh Reynolds and David Guymer and are also unrelated to the previous books reading as stand alone tales. 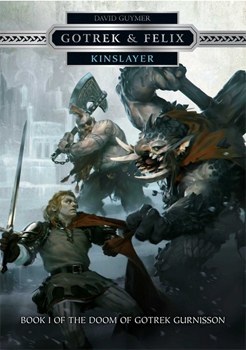 and Felix story “Kinslayer – Book 1 of the doom of Gotrek Gurnisson” as part of the The End Times event which features several other books. The story from David Guymer takes place some time after Long’s last book rather being a stand alone affair.

The pair have parted ways for some time with Felix now married but craving the adventure of his younger years. Felix heads out on what may be his final adventure. As the forces of Chaos engulf Kislev he is reunited with old friends Gotrek, Ulrika, Snorri and Max as they fight the forces of the Troll King but a secret from the past splinters the group of friends.

Guymer will have a hard task crafting a story which is a satisfying conclusion to one of the most endearing book series in Fantasy with a mythology that has spanned sixteen books as well as various ebooks and anthologies. One of the most wryly comical elements of this mythology is Gotrek faced and defeated a Bloodthirster of Khorne, widely recognised as one of the toughest and deadliest creatures in the Warhammer world, way back in book number 3 so exactly what could defeat the slayer has been a subject of discussion ever since amongst fans .

Kinslayer – Book 1 of the doom of Gotrek Gurnisson is set to be published by The Black Library 5th September.

Andy Haigh started writing to counteract the brain atrophying effects of Retail Hell, now it's an addiction. Andy is an unrepentant sequential art absorbist and comics are one of his passions. Other interests include Film, Music, Science Fiction and Horror novels and quality TV like Game of Thrones. He can talk about these at great length if only someone would listen. He lives a somewhat hermit like life in The Shire, spends too much time on social media and is still waiting to go on an adventure.
More Goodness
FantasyGames WorkshopWarhammer