previous
Batman: Strange Days - A Short for the 75th Anniversary
random
next
Geek Pride's Pick of the Best in Zombie Novels - Part 1
Books and Comics
0 likes

Fleshes out the main antagonists of an already impressive story.

Gabriel Andrade and Daniel Gete pull off some great art and handle the disturbing imagery well.

Profoundly disturbing, more so than normal for Uber, which is saying something in itself.

A disturbing but none the less engrossing diversion from the on-going narrative of one of the best comics around. 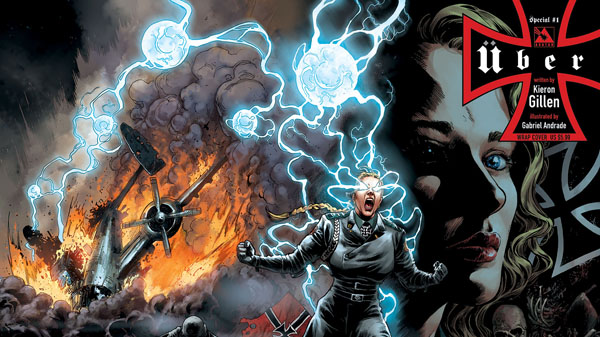 Kieron Gillen’s Uber has been going for almost a year now and, as the writer points out in his afterword in this special, there’s been lots of generals and leaders stood around maps planning the latest move in the on-going war effort. The implications of these for the boots on the ground have been the main thrust of the story and the other main factor is of course the actions of the Uber’s themselves. Whilst the story has been propulsive as it shifts from one aspect of the conflict to the other, there’s been little in the way of real character work and 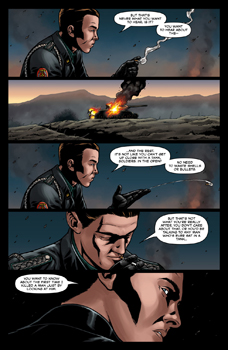 the few instances there have been characters  that haven’t lasted too long, a side effect of the brutal nature of the setting, there is a war on after all.

The Battleships Siegmund, Siegfried and Sieglinde have so far been seen merely as walking, breathing weapons of mass destruction. There’s been little shown of why they do what they do or who they were before their transformation, this special for the first time gives the antagonists a chance to tell their own stories, or part of them, to an unseen enquirer in the manner of answering one simple question “Do you remember the first time you killed?”.

This is dangerous ground from a story and character point, there’s an old adage about less is more and demystifying the chief antagonists could rob them of their power. It should go without saying that these tales, one for each of the Battleships, were never going to be easy reading. The world of Uber is a brutal,disturbing and horrifying one and the three characters here are the figure heads in this brutal and harsh world.

Gillen doesn’t shy away from the darkness of the these characters stories and it’s a credit to his talent as a writer that there’s nothing as prosaic as seeing parents killed or anything else generally associated with villain origins in comics, and the Battleships are supervillains in the context of Uber’s story.

Without having already established this title is a serious one, it could have come across as incredibly crass and offensive, and some will undoubtedly argue that it still is especially in the case of Siegfried, which is one of the most outright disturbing and offensive things to feature so far.

Regular artist Canaan White doesn’t feature here with art being handled instead by Gabriel Andrade for two tales and Daniel Gete for the third and the pair both handle things well. 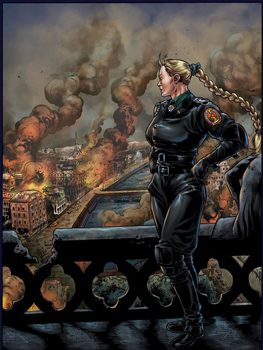 Siegmund’s tale “The Battle Of Spree Forest” has him stoically telling his story whilst sat atop a burnt out smouldering tank casually smoking a cigarette, it’s an effective image, contrasting the more traditional war machine with the German’s new war machine. His story is the first time that it’s revealed that the German citizen’s are just as terrified of the Battleships as everyone else and also he makes a point about the difference between the stories told about the events he describes, with notorious propaganda chief Goebbels getting a mention, and the actual reality.

Sieglinde’s tale “The Bitter Cup” paints her as more sympathetic than her fellow Battleships as her story of bitter betrayal plays out, and it’s shown that she was a normal woman once with a loving husband who went off to fight in the war and things went horribly, horribly wrong as she discovers her new found power via a blood test in a Dresden hospital for the wounded.

Whilst all three of the Battleships are the stuff of nightmares , it’s Siegfried’s “Toy Soldiers” that really paints a disturbing picture as it’s revealed that he was just as sociopathic as a youngster thanks to an over bearing mother, it’s a story that features not only full blown hate crime but also one of the most powerful images of them all in a double spread reveal handled masterfully by Andrade.

Andy Haigh started writing to counteract the brain atrophying effects of Retail Hell, now it's an addiction. Andy is an unrepentant sequential art absorbist and comics are one of his passions. Other interests include Film, Music, Science Fiction and Horror novels and quality TV like Game of Thrones. He can talk about these at great length if only someone would listen. He lives a somewhat hermit like life in The Shire, spends too much time on social media and is still waiting to go on an adventure.
More Goodness
Avatar PresscomicsGabriel Andrade