by Peter Ray Allison on 07/08/2020
Details
PublishersComics
By

A fantastic story within the World of Darkness that remains accessible to new readers whilst offering fresh insight for existing fans.

Although the grungy art style was perfect for the Anarch storylinem it felt out of place in some instances.

Vampire: The Masquerade – Winter’s Teeth embraces the comics medium whilst remaining true to its gaming roots by provides fresh material for players of the game.

There is always some trepidation when an existing franchise branches out into a new medium.  Questions abound regarding whether the quality will be retained and how it will interact with the established storyline.

Paradox Interactive, the new owners of White Wolf, seem to be taking a shared world approach to the World of Darkness setting.  However, they are carefully curating who has access to the setting, thereby ensuring that the finished product meets their expectations and that of their fans.

A case in point is the new Vampire: The Masquerade comic – Winter’s Teeth.  It would be very easy to write a typical vampire comic with a Masquerade logo added later, but what Tim Seeley and Tini & Blake Howard have done is to create engaging stories indelibly set within the World of Darkness.

The first issue of Winter’s Teeth includes two separate stories.  Winter’s Teeth follows Cecily Bain, as she strives to avoid becoming embroiled in vampire politics whilst maintaining the secrecy of protecting her sister.  Conversely, a group of anarchs – independent vampires not aligned with the Camarilla or the Sabbat – are given a task in exchange for favours, potentially kicking off deadly repercussions in Anarch Tales.

There is a lot to digest in the first issue of Winter’s Teeth, and yet the story introduces the key elements of the setting without hammering the reader with reams info-dumps for those unfamiliar with the setting.  Although Winter’s Teeth remains accessible to new readers, it is still recognisably the World of Darkness.  Existing fans of the setting will find a lot to like, with nods to iconic elements.

Artistically, it is serviceable, evoking the setting with its grungy art style, which is especially suited for the street-level anarch slum of Anarch Tales.  Whilst it seemed out of place in the high-level politics of Winter’s Teeth Camarilla-based storyline, the splashes of red reinforced the themes of the story.

However, what made Winter’s Teeth #1 stand out is that it incorporated material for the roleplaying game it is based on.  In the back were two completed character sheets based on characters from the stories, which can be dropped in to games.  These are both designed for the fifth edition (AKA V5), but can be easily translated into earlier versions of Vampire: The Masquerade with minimal hassle.

Ultimately, Vampire: The Masquerade – Winter’s Teeth embraces the comics medium whilst remaining true to its roots and provides useful material for players of the game. 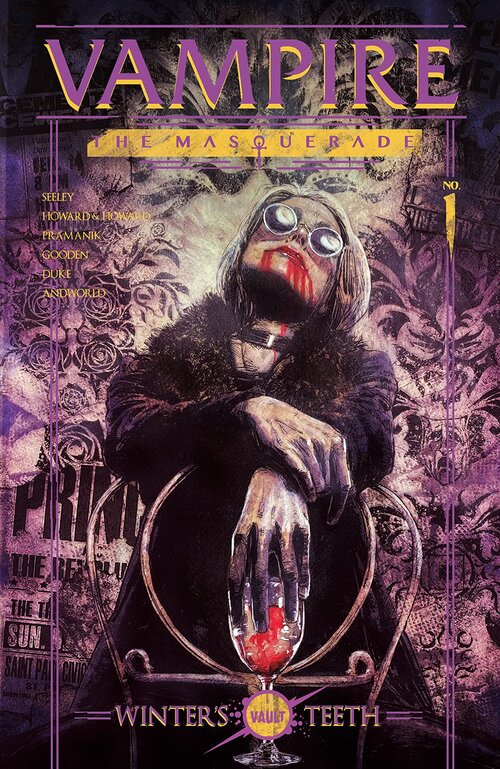 Science Fiction: the final frontier. These are the articles of the freelance journalist Peter Ray Allison. His continuing mission: to explore strange new realms of fiction, to seek out new genres and new visions of the future, to boldly geek where no one has geeked before.
More Goodness
Paradox InteractivevampireVampire: The Masquerade