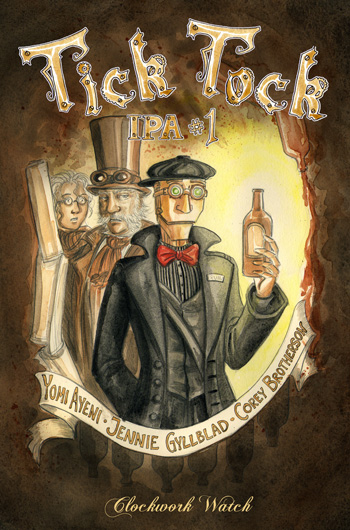 A little while ago, I wrote about the Clockwork Watch comics Arrival and Breakaway. Clockwork Watch itself is a project consisting of various transmedia projects. The Arrival and Breakaway comic books were an adaptation of the original story written by Yomi Ayeni, its new format worked by writer Corey Brotherson and artist Jennie Gyllblad. There 2 books both follow lead character Janav Ranbir and show a story set in a retro-futurist Victorian England, placed firmly in the steampunk genre, and revolving around the creation of clockwork androids which have gradually advanced to become prominent in society.

The latest addition to the project is the Tick Tock IPA Collected Edition, “a trilogy about how a Clockwork Servant became sentient, a development that shook the moral fabric of British Society, Industry, The Church, and the Crown.” The story is placed between the previous comics, giving a more individualised perspective on the slowly advancing movement of independent “clocks” and the relation to the mysterious Alchemist character willing to “jailbreak” them. Like the works beforehand, Tick Tock IPA is heavily invested in questions of freedom, sentience, technology and history, specifically that of the alternate variety. In the case of this particular story, we follow the events surrounding the creation of Indian Pale Ale, within the context of Clockwork Watch‘s alternate history, and the way in which the android that is behind the creation comes to play a pivotal role in the changing world.

Ervin, our central character, is a “clock”, a clockwork android. However, due to an accident, Ervin gains sentience and begins a journey that will see Victorian society intensely challenged. The character is primarily designed to address those classic sci-fi questions that revolve around artificial intelligence, exploring notions of freedom and whether or not a being of artificial intelligence can be “real” in the same way as a human. Personhood is central to the world of Clockwork Watch and, with Tick Tock, I feel that the creative team has hit their stride in a big way. Arrival didn’t really do it for me and while Breakaway definitely stepped up the game with an older Janav Ranbir, there are certain limits to the storytelling that can occur through a character that is more of an observer of change than an active participant in it. Ervin, on the other hand, seems to be set to lead the android revolution and his journey from brewmaster to heir of the Hodgson fortune (the Hodgson’s being the creators of IPA), is one that, to me, seems to be a much stronger arc than that of Janav in the previous books.

As in previous entries, Jennie Gyllblad’s artwork continues to hold a strong appeal, the watercolour stylistic not only adding to the stories “old timey” setting but giving the book a unique aesthetic. The art is often striking and, as far as I’m concerned, is a great addition to the story. However, there is a lot to keep track of in the proceedings of Clockwork Watch and I can’t help but worry that the artwork may not lend itself so well to all eyes and that, while perfect for a poster for example, Gyllblad’s work may at times benefit from a cleaner stylistic. This is a minor gripe however as, for the most part, the book flows beautifully and, to be fair, the unique artwork does help to hammer home that this is not exactly a traditional comic project.

Overall, I can’t help but feel that Tick Tock is the strongest of the Clockwork Watch comic releases so far with a more personal character arc and a continuation of the great world building the series excels in, nicely maintaining the interestingly alternative take on colonial history. The collected edition particularly comes through with the creative team’s broad media scope vision as it brings together a ton of extras for the dedicated fan to explore, from original scripts to breakdowns of some of the artwork decisions. If you’re a fan of the series it’s a must, if not, it’s a more than worthy first look.