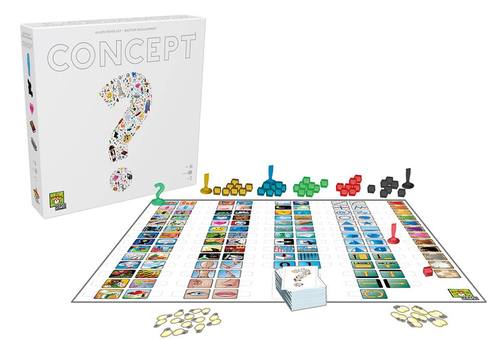 Concept is a game that initially had me nonplussed. I’d seen some buzz about it on social media: people had said it will make or break friendships, but not in the way that The Resistance or Cash N’ Guns would. This was a game about trust and communication, the reason your friendship would be tested being your ability to do this with your team mate. It seemed, right up until I opened the box to be another Charades style game like Pictionary with words, for people who thought verbally instead of pictorially.  And in a way, I was right, but for very good reasons.

The game plays in such a way that you are given a card with 9 concepts on it. You pick the concept, then using the board you place several markers denoting abstract and descriptive aspects to the word or phrase you are trying to convey. This is the basic mechanic behind Concept, and although it seems incredibly convoluted when first learning the rules, you quickly become acclimated to using the game pieces and mild gesticulation to get your point across.

During our playtest we had a riot. We had two games consisting of almost 120 minute , with raucous laughter punctuating friendly arguments (“how can that represent Painting The Town Red?!”) we at Team GP thoroughly enjoyed our playtime.

It should also be mentioned that the game pieces are gorgeous. What could have been cheap cardboard (we’re looking at you, Cryptozoic) is instead a beautiful molded plastic affair. While they are great to look at, it would’ve been good to include something to keep them in instead of just the box, which would free room on the table.

The game is a great addition to “party game” genre of board games, with games being as long or as short as you really want it. It could utilised as a brilliant ice breaker or a starter game for any game night both hardcore and otherwise. The price point is pretty much middle ground for most decent-sized games, and should definitely be an addition to the Everyman gamer’s arsenal.