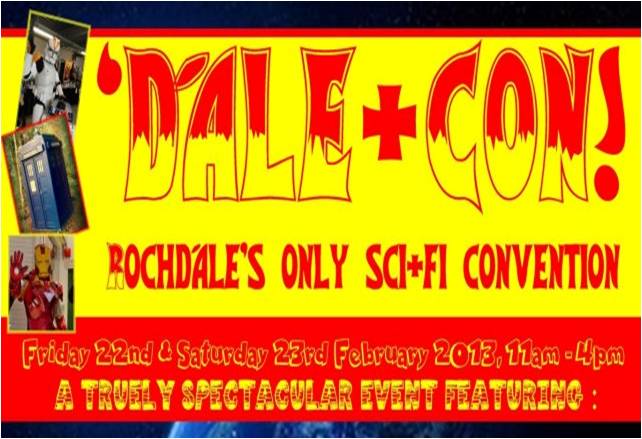 Rochdale is my home town and unfortunately it hasn’t had a lot of good press recently, so I am happy to be reporting on a positive from my fair town. Today was the first day of Dale Con our very own sci-fi convention. I should add that if you are attending tomorrow, do not expect anything in the region of Manchester MCM Expo of London Comic Con, this is a small town event, free to all and so is not comparable with other well known events. That said I have been impressed by the offerings of today.

On the upper floor were the main attractions, these included a wandering Darth Vader, Storm Trooper and Clone Trooper more than happy to pose for photographs. C3P0, R2D2 and another couple of Storm Troopers were on display as well Han Solo in carbonite.  Stupid Jar Jar Binks was also there and sorry but in our house that is the only way we refer to Jar Jar, I am sure you understand why.

Today and tomorrow Dale Con has a host of Star Wars actors taking part in signing sessions throughout the day, these include Pam Rose who played ‘Weird Girl’ Leesub Sirln in Star Wars: New Hope; Alan Flyng who played a Storm Trooper in the iconic Carbon Chamber scene as well as a Imperial Officer in Return of the Jedi; Stephanie English a Rebel Technician from Empire Strikes Back; Ken Coombs who appeared in Star Wars as well as four Bond films; Brian Wheeler who played a Jawa. But by far the main attraction happens tomorrow when Craig Charles aka Lister from the brilliant Red Dwarf, who will not only be signing but taking part in a Q&A session at 1pm. 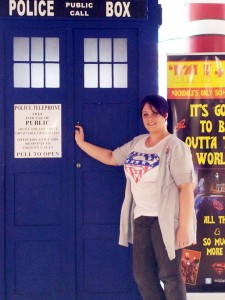 I spoke to Martin Ballard, the event organiser and Chairman of Rochdale’s town centre management. He explained that the idea to run this event was only conceived around November, then began the task of sourcing attractions to draw the public, with the final announcement came in January, delayed because they couldn’t go public until the special guest, Craig Charles, had been confirmed. Today was organised to bring people back to Rochdale and they have certainly put their heart into it, there was a lot more to see than I expected which is very encouraging. I do think what today suffered from was a lack of publicity, I myself a hardcore geek only found out about it 2 weeks ago. However, I was impressed by the number of people milling around and posing for photos with the props, and these weren’t just geeks. It was pleasing to see the smiles of the children when they came across characters they recognise. As far as this kind of event goes I would say it was quiet, but then it is a Friday and a lot of people may be working. I expect there to be a lot more people and a lot more ‘buzz’ tomorrow, with the added attraction of Lister.If you are in the area I urge you to check it out tomorrow.

C’mon you can never have too many pictures of you with a Dalek, Tardis or Storm Trooper, plus smegheads, Lister is going to be there. I particularly recommend stopping by and chatting to local freelance artist & illustrator Joe Matthews. He was happy to talk to me and my extremely chatty children and kindly drew illustrations for them both; Xander was very happy with his Spider-Man. I suspect this will be popular attraction tomorrow so head there early to get your drawing. I do hope that more people will make an effort and cosplay, there is £50 worth of WheatSheaf shopping vouchers on offer, so come on geeks crack out your costumes.

I hope to see some of you geeks tomorrow and I’ll be joined by Ben, a fellow writer at Geek Pride.  Feel free to say hello (look out for the purple hair) and give us your opinion of Rochdale’s very first Sci-Fi convention.