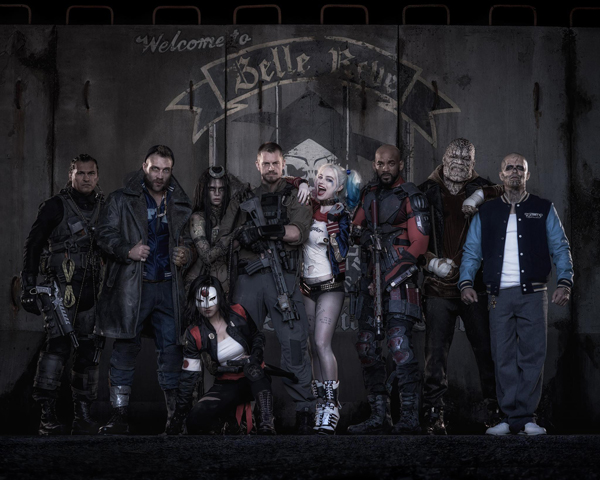 So for anyone that didn’t know the first official photo of the cast of David Ayer’s upcoming Suicide Squad in costume hit the internet after first appearing on Ayer’s Twitter account and well my response was pretty much a confused, ehhhh?

Anyone with half a brain knows that there’s going to be some variation on how characters appear in film when compared to their source material. Characters in comics have numerous different appearances depending on their longevity and the creative team working on a given title, but when you’re sat looking at a cast photo for a film featuring numerous characters you are familiar with and then trying to figure out who’s who then it’s an indicator that something may have gone a bit awry on the costume design front.

Whilst Adewale Akinnuoye-Agbaje might look pretty badass as Killer Croc and Jay Hernandez and Karen Fukuhara may look the part as El Diablo and Katana the rest pretty much left me scratching my head even if Margot Robbie does look pretty dollsome as Harley Quinn.

DC/Warner’s track record so far has been pretty appalling when it comes to recent cinematic representations of their characters, Green Lantern and Jonah Hex were both opportunities to do something different that were utterly squandered and Man Of Steel whilst being a box office hit split fans with many disliking the seemingly default “gritty” tone ill suited to a character like Superman alongside its incoherent narrative and bewildering CG FX driven carnage.

If any DC property fits the “gritty” tone it’s Suicide Squad The CW’s Arrow has managed to do good things with a fraction of the budget here and David Ayer seems like an ideal fit with a catalogue of believably gritty and brutal films to his name like Fury, End Of Watch and Training Day and a more serious tone would definitely work in its favour after all it’s called Suicide Squad not Super Happy Friendship Squad.

Exactly how this is going to work on a narrative level remains to be seen as introducing so many characters in one film is going to be problematic at best and especially for characters like Harley Quinn who has far more to her character than “crazy girl who loves The Joker”.

Until something like a trailer appears then my and seemingly the internet at larges opinion seems to be one of confusion as to whether the writers of Suicide Squad have actually had more than a fleeting glance at the source material Suicide Squad is apparently based on.

Suicide Squad is set to appear in August 2016.