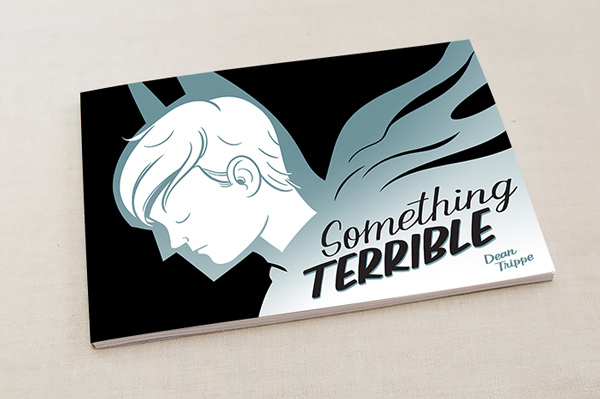 A while back Dean Trippe did a Kickstarter with the hope of producing a printed edition of his autobiographical comic Something Terrible, he set a rather small target of just over $6,000. What he wasn’t expecting was the rapidly snowballing support he received with the campaign finishing at over $45,000 raised.

Unless you’ve been living under a rock you probably already know about Trippe’s Something Terrible and even if you don’t, chances are you’ve seen one particular image taken from it somewhere on the interweb. Seeing it in context though makes it all the more powerful. Trippe’s story told via almost uniform panel layout in black and white and blue is that of a young boy who suffers sexual abuse that haunts him more or less his entire life, leading him to create this comic.

Whilst Something Terrible may be a rather brief affair at 14 pages it has a resonance that can’t be denied, examining the power that heroes have, even fictional ones, and how they can provide a much-needed escape from reality. Trippe has been outspoken about how his work has resulted in dozens of people messaging him about their similar secret origins.

Now anyone who missed the Kickstarter can pre-order the printed edition of Something Terrible, which features additional bonus material and a new four page epilogue – order it by going – HERE