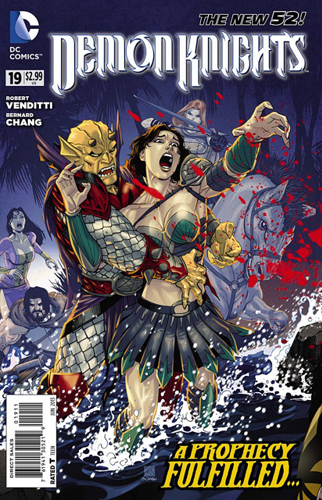 Exoristos and Madame Xanadu try to convince Vandal Savage to spare Etrigan and join their forces. Meanwhile Cain and his army lay siege to the island of Themyscira. In Hell Jason Blood continues to defy Lucifer whilst the Lord of Hell realises the threat Cain is.

Demon Knights has taken a few twists and turns lately and the time jump of 30 years resulting in both Al Jabr parting ways with the team, due to being a mortal and succumbing to age unlike the rest and introducing Cain has been one of the best.

Vandal Savage’s torture of the immortal Jason Blood for those years before being rescued by Sir Ystin is definitely one of the most brutal things to feature so far and really makes Savage live up to his name.

This issue though features yet more twists and turns as Savage has the Demon Etrigan at his mercy due to Jason Blood stubbornly refusing to leave Hell and switch places with him resulting in Etrigan’s powers burning out. Savage stating his grudge with the Demon stems from being dragged to Hell despite his being immortal with Savage saying ‘That’s just…..just…..RUDE!’

The siege of Themyscira is told in flashback by Atla and it’s revealed that the Amazons were expecting their enemies to attack at daybreak being unfamiliar with Cain’s affliction so come nightfall their force is fatigued.

The action switches between Greece, Themyscira and Hell but never becomes confused or muddled and the flow of events is easy to follow.

Demon Knights still retains it’s ‘Dungeons & Dragons’ trappings but utilises them well with an army of Amazons, Cain’s afflicted army and the Demon Knight’s themselves all clashing together in one epic battle.

This on it’s own would make for a good issue but there’s plenty more going on.

The love triangle between Xanadu, Etrigan and Jason Blood continues, Sir Ystin’s prophecy comes to fruition leaving the story at a cliff hanger and as always there’s some sly humour like Horsemaiden’s conversations with her horse Brickwedge.

Bernard Cheng handles everything well, with the battle scenes being especially good but the most effective is the aftermath with two panels showing Etrigan changing into Jason Blood as Xanadu speaks to Etrigan and finished her sentence with Blood.

Marcelo Maiolo’s colour palette of muted dusky dark tones and the oranges of Hell and Etrigan’s flame make for a really good contrast too.