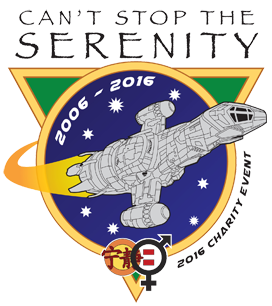 For those that don’t know, “Can’t Stop the Serenity”, or CSTS for short, is a worldwide event that takes place every single year. Several cities around the world are chosen for special screenings of the film Serenity the follow up to Joss Whedon’s beloved Firefly television show, with all of the money going to Equality Now, Joss’ favourite charity. Equality Now, if you couldn’t tell by the name, is a charity designed to bring equality to everyone in the world, as well as specifically help women in dire situations, such as ending horrific things like genital mutilation and sex trafficking, among other acts.

2016 marked the 11th annual event, and Denver, where I live, is one of the host cities. Last night (September 24, 2016), saw my wife and I attend for the third time, and bring our daughter along for the first time, which she was very excited about. In fact, she couldn’t stop talking about it for several weeks. She’s a Browncoat, just like her folks.

Anyway, if you’ve never been, it’s a great event. In addition to the movie, which is one of my all-time favourites, the event sort of plays out like a screening of The Rocky Horror Picture Show in that fans dress up, quote along with the movie, holler and cheer, etc. It’s great, because it makes it feel like a whole event instead of just a movie. And it definitely is an event. I don’t know about how other cities who host CSTS do things, but Denver’s version, in addition to the movie, also does a couple special things.

Before the movie, we always get treated to a bonus screening of Dr. Horrible’s Sing-Along Blog in the bar area (the movie theater in question, Alamo Drafthouse, has a bar and serves meals during the movies). It’s mostly for background noise, but the Browncoats like to quote and sing along with that as well, so it makes for a fun time. 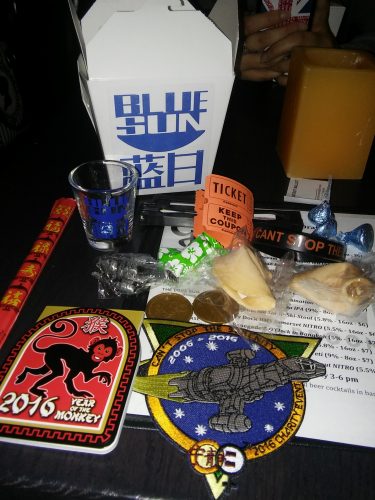 In addition to this, the local version also hosts a charity raffle at the end of the movie, with all proceeds also going to Equality Now. A couple local companies donate Browncoat-friendly merchandise of all different types, and the Browncoats responsible for the event also get special items that have been autographed by various people from the Whedonverse. Last year, we won a Kaylee Frye Funko POP! signed by Jewel Staite, as well as two mugs with artwork based on Buffy the Vampire Slayer. The raffle this year featured even more, including POP!s signed by Clark Gregg and Hayley Atwell (guests at Denver Comic-Con, if you had forgotten about my columns this past summer), and one signed by the captain himself, Nathan Fillion. Fillion also decided to donate an 8×10 of Jayne Cobb signed by himself because, well, he’s Nathan Fillion and that’s what he does.

The screening was great, and just as much fun as it always is. Maybe a bit more, since my daughter was with us and the crowd reactions were making her excited. Serenity is one movie we all get completely wrapped up in, and seeing her get to watch it on the big screen for the first time definitely made for some great memories.

She was especially excited about the raffle, because who doesn’t like winning prizes? We beat it into her head that she might not win, so we didn’t want her getting upset if she didn’t win anything. She understood, but deep down, you could tell she was going to be really disappointed if she didn’t win. Fortunately, that ended up not being a problem.

Between the three of us, we put in nearly three dozen tickets for a variety of items. While I didn’t win any of the autographed Funko POP!s, which is where I put the majority of my tickets in, I still managed to walk away with winning a Kaylee figure for the second year in a row: 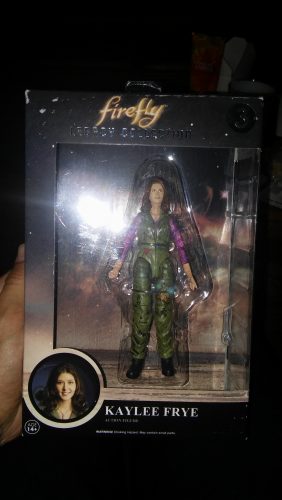 All five of the Funko Legacy Series Firefly figures were up for grabs this year. I have wanted these for a long time, so I put in for all of them and fortunately, it paid off. Only four more to go now!

Near the end of the raffle, most everything my daughter and wife had put in for had already been claimed, but it turned out all was not lost. My wife put in a ticket for my daughter that she had missed for a signed 8×10 by Clare Kramer, better known as “Glory” on Buffy. Again, if you’ve read my previous stuff, you know we’ve met Clare and adore her. My daughter loves her and the show, so she lit up like a Christmas tree when it turned out her number got called for the photo. 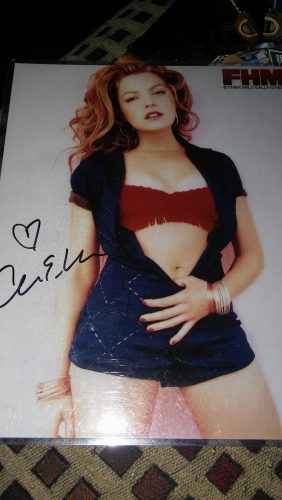 Even if I hadn’t won anything, seeing her smiling face when she won would have been more than enough.

The event has already been confirmed for next year, and you better believe we will be in attendance once again. If anyone reading this hears of a local version of the event, I strongly urge you to check it out. Watch a good movie, meet some nice people, and help out a great cause that impacts all of us.