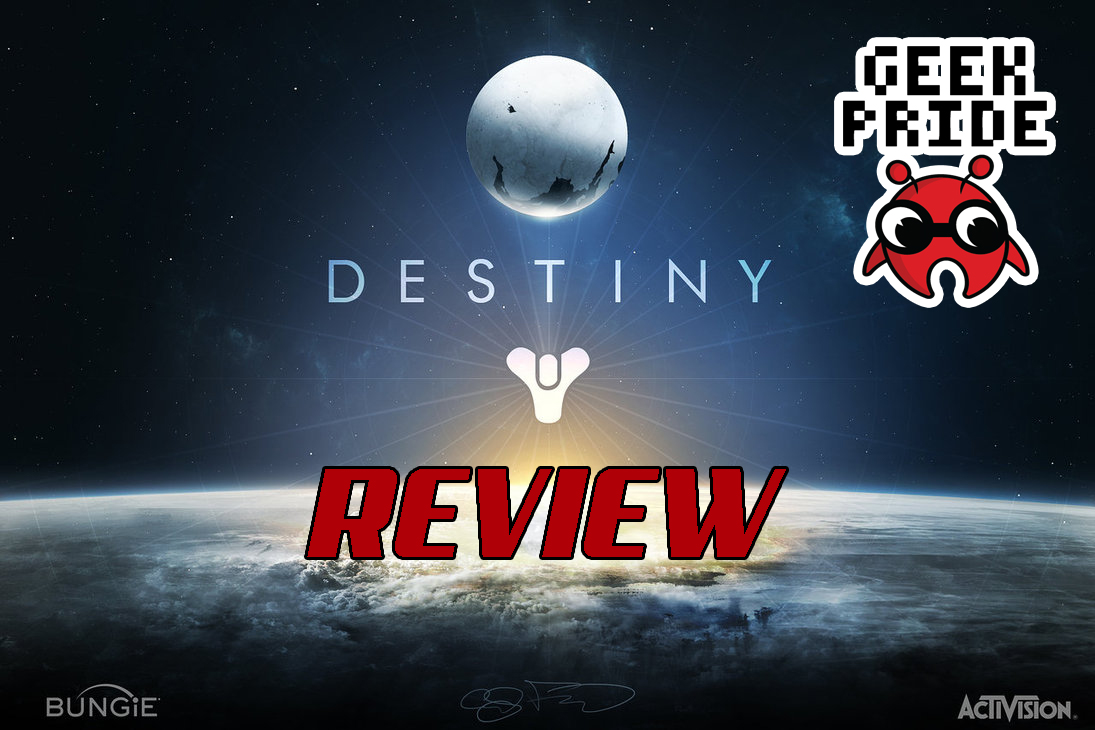 As you will know from my last review I’m a big halo fan boy and therefore it would be understandable that anything made by the creators of one of the greatest Franchises on the Xbox , if not cross platforms,would be something I would totally and blindly get behind… in Bungie we trust… in Bungie we trust.

I wanted to LIIIKKKKE this game I wanted it, with a bit of trepidation, to even rival its forbearer, but as much as I did ‘like’ it I came away slightly underwhelmed and I couldn’t quite put my finger on what it was.

First impressions; as I watched the camera pan over an Old Russia landscape, replete with rusted cars and strange, but slightly familiar, aliens I thought; these graphics look a bit weak…. this is meant to be next Gen right?

Now I would like to point out at this juncture that I am not a Graphics nazi, in fact I don’t care about graphics very much, as long as the gaming experience is a good one and I’m happy if graphics are sacrificed for a more expanded game it self; but the issue is I don’t know if I got that.

Don’t get me wrong they weren’t ‘bad.’ Background graphics especially, at times, were exquisite. I also liked the fact that when you panned the camera you got a nice Bokeh, showing a shallow depth of field but I don’t know it just seems slightly unpolished, especially in the cut scenes. Something I will bring up later.

As the game play itself is concerned again I had mixed emotions about and I found myself torn about my experience.

As Sci Fi FPS go, there isn’t a huge change from similar titles and if you have played halo then you will be very familiar with the set up. Though Destiny is very reliant, if not solely reliant on Hoard fights, which are very challenging and intense and I love that but it feels like every time you ghost goes near a console, you know what’s going to happen and it takes away from the game slightly… Don’t you do it, step away from the console… Ah crap!

Enemies have a level and their weapons / armour correspond with that level. They have power bars so when you shoot at them you know their health, and like most RPGs, you get a damage count , including bonus/ crit if you hit them in the head.

There are also Elite units, that represent a the same level as their underlings but with better armour and weapons. These are represented by yellow instead of red power bars and, if you are of a similar, or lower level than them, nails to defeat.

To expand on the RPG / MMO theme you yourself level up, gaining more abilities, health and damage (standard) and acquire different gear, as time goes on, from normal to epic loot, all giving you better abilities and most that will upgrade with use, giving you certain bonuses like; better reload speeds, carrying more ammo, better shots etc.

Where I do think Destiny stands apart from other MMOs / RPGs is the fact that you can switch between subclasses and benefits without having to pay for it and so, you could be a damage dealing titan one game and then a Tanking Titan the next, obviously you have to have the corresponding gear to go with that and have bevelled up the abilities.

Another nice touch is that you don’t have to fight over loot, because when there is a drop and you are in a group, everyone gets it and this includes ammo as well, so there is no ‘rolling’ for loot or fighting over ammo, which is very important.

Coupled with this, you all get a speeder (a sparrow) to fly around the map on which is good though despite bungie’s affinity towards vehicle use in its games there is a distinct lack of vehicles and vehicle types in Destiny. Think I used 2 other types of speeders and thats about it.

Where Destiny falls down though is its adherence to the age old MMO/ RPG grind fest, instead of using this as a template to do something different. Granted it is tried and tested and you would really need to think out side of the box to get something else BUT for me i just hate grinding, like HATE IT! So many hours of my life in WoW, LOTRO and SWTOR Grinding for Mats, Grinding for Armour, grinding, always grinding. And because there are only limited areas where you can go, the repetition is all the more tedious.

This is where the Multiplayer games come in I guess so if you are tired of the day to day grind of the open world, why not try your hand at the MP and earn points and bounties for better armour…which is a good idea if it weren’t for the fact that there are no level caps on the MPs and so it doesn’t matter how apt you are shooting people in the face if they have better weapons and armour, you are boned and will spend most of your time watching the respawn count down…DAG NAM IT!!!

This I found a bit off putting, At least in Halo, when you got ganked time and again you felt you would get better, you’d learn the maps, where all the good weapons are and soon you would be tea bagging the corpses of your foes like the rest of them.. in Destiny i just felt frustrated and because I HATE the grind just haven’t wanted to play MP much more; I like to have at least a small chance of success.

For those not familiar with said grind ( NOOOOBS) It wont be as big an issue because it sucks you in and you feel like you are enjoying it but for a recovering WoW addict… I’m Matt Geary and I’m a WoWaholic, it has been 6 years since my last game. Its just more of the same and even the ‘events’ that happen as you travel around aren’t enough (as enjoyable as they can be) to push it above the rest.

My final issue with Destiny is nothing to do with the game play, its the lack of any gripping story line, Even Peter Dinklage cant save it. You don’t know what you are really, where you came from, what you are doing there, why the world is as it is and why there are a bunch of warring factions in your solar system.

Now granted Halo was a bit vague to start with but what it had, that Destiny lacks, was a partnership of characters that you could get behind.

Master Chief and Cortana were protagonists you cared about, who had a relationship. Even Nobel team were a group of guys you felt strongly for and the end scene, when you are fighting off the elite and noble 6 takes off his helmet to fight the onslaught… fist biting stuff and Bungies finest hour.

Sadly my guardian I didn’t overly care about and it seems all you are is the brawn to your ghost’s brain. Or the Groot to your ghosts Rocket… So I mean.. I am Groot. The banter between the two characters is minimal and there is nothing that really warms you to either. Yes The ghost (Dinklage) is amusing but there is no depth because there is no real connection so when the game ends you are like… Meh…. On with the grind!

Finally, I am mindful that this review has been slightly negative and I must make the point that its not a bad game its just not what I think it should have been and sadly it didnt live up to the hype. The concept of taking the best bits from a lot of other games was bold and a good idea but I think it has fallen short off all the games it has tried to mimic. I can only hope that the new expansions add a bit more depth and change up the game play some what… On the plus side Halo is still the best FPS out there, SUCK ON IT COD NERDS!