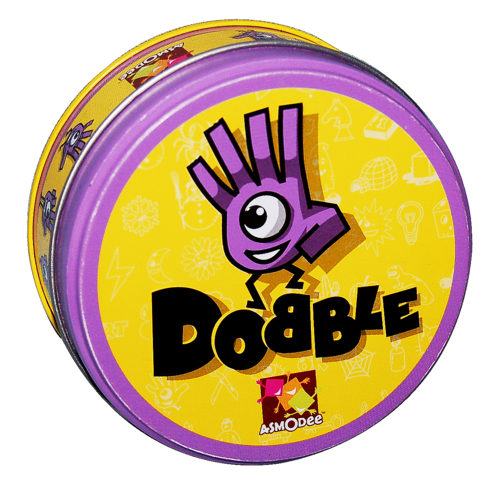 Straight to the point Simple and hectic fun, perfect for a filler game or getting the whole family involved, but may not appeal to those who prefer more strategy in their game.

It’s Christmas, and you know what that means? Family dinners, falling asleep on the sofa, and of course GAMES! But what if you don’t have time for a Monopoly all nighter? A Risk-a-thon of ‘I kill your dude, you kill mine, rinse, repeat’? Then may I humbly present to you my review of the big game in a little tin, Dobble!

At first glance, Dobble isn’t much to look at. Some fun and crisp pictures on all the cards, and a cool looking hand mascot, but nothing to suggest what the game is really all about or to get one all inspired and excited. But a quick scoot through the rules (and I mean quick, this is a very simple set of mini-games based on one mechanic, explained below) and you start to get some idea of the crazy hijinks this game can deliver.

Each circular card features a set of 8 icons taken from a list of 57, ranging from a tree to a pair of scissors to a dolphin. The clever part is, every card shares one and only one image with every other card in the tin. As you can probably now guess, the mechanic of this game is finding that one image. Dobble isn’t one game but a collection of 5 mini-games based on this mechanic, and involve spotting the matching symbols, shouting out what you’ve spotted and either grabbing or giving away your cards, depending on which mini-game you’re playing. The best way to play is to go through each in order, with the overall winner being the player who won the most mini-games.

So why is such a simple game so fun? Well, it’s the simplicity that makes this a cracker in my book. With up to 8 players (trust me, the more the better), games involve quick wits, fast reactions and loads of shouting. This is especially funny when someone yells ‘Thingy!’ In the heat of the moment before triumphantly slamming their card down on the table! And what’s more, the game is accessible to any age so long as you have at least one working hand! This is therefore perfect for those Krimbo games with friends and family, particularly for those who don’t like Trivial Pursuit (it’s an Art and Literature question? Wake me up when you get to Science) or games of dice-rolling luck (*cough* Monopoly *cough*).

Like all games, I like to play them several times, and then sit back and think ‘OK, so where’s the chink in the armour’, but with Dobble, I was hard pressed to come up with anything. If I was being hyper critical, I suppose this game could exclude those who may not have quite so efficient image recognition abilities; you’ll always have that 8 year old girl who just ‘gets it’, whizzing cards off her stack in the time it takes you to see that car that matches someone else’s, just before said little girl whaps a new card over the top and you have to start again.

The card stock is pretty decent, so will stand up to the abuse that inevitably occurs in games of speed. As I said before, the images are clear and crisp (the devils at Asmodee made them all different sizes however, making recognition all the more difficult). Dobble also comes in a cool resealable tin, so this game can be taken anywhere in  a pocket and whipped out for a filler game or something to play with literally anybody. This small number of components also make the game cheap to pick up, another feather in Dobble’s rather stuffed cap!

WARNING: If you are looking for this game, outside of the UK it’s most commonly known as Spot-It! Don’t be fooled, it’s exactly the same game!