The new Eisenhorn comic, Eisenhorn:Xenos, from Pixelhero Games and GW and published by TPub, is a preview to the new game, and sets the stage. Written by Ryan O’Sullivan, it introduces Gregor Eisenhorn, Inquisitor of the Ordo Xenos. this is probably more useful to those who haven’t already read the Black Library books by Dan Abnett. We also meet some of the supporting cast, and learn about his abilities.

The opening act introduces not just Eisenhorn, but the game’s protagonist, EyeClone, Midas Betancore and Krintos. We also see his first meeting with Lores Vibben. The second act skips forward, and takes us to immediately before the start of the game. 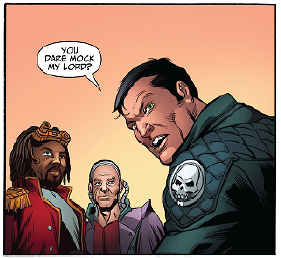 The artwork is quite clean and tidy, almost clinical. The colours are vivid and well judged and the lettering is clear. The writing style itself reflects the style of the Inquisitor itself – a little cold and clinical. There is possibly a little more exposition than I’d like, but I’ve been playing 40k for over 20 years, so I have to allow for them to set the scene for readers and players less familiar. There’s a nice mix of adventure and loss, and action of course! Being set in the Grimdark, the violence is lovingly dwelled upon, and the vultures and other scavengers aren’t far away. There’s also gratuitous use of the word ‘mate’ in places, presumably to help people read it in the appropriate gritty English accents. 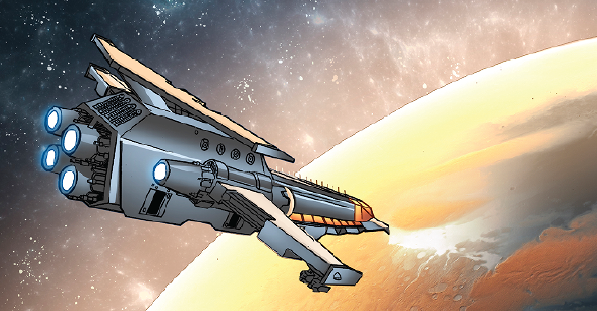 Overall, I can’t help but feel that it could have been paced better with another 4 pages, at only 22. I also find the art style is just a little too stark. It’s obviously been coloured on computers, but the gradients aren’t smooth in places. This draws the eye to the background, away from the characters. The shading on the characters is a little coarse and garish, which may come back to a mix of pencils, inks and colours. I couldn’t help but think that the scenery and scene setting looked a little too SciFi, and not Gothic and embellished enough for 40k – But that might just be personal opinion. There are some nice touches, like the use of the Imperial shipping containers in one scene (Which GW only recently released for sale) – It does seem to tie quite closely to what I have seen of the game, though.

Overall, it’s not Marvel or DC, but it’s pretty well done, and ties to the game well. It’s a nice touch to offer a prequel to the gamer, to help their immersion if not already familiar with the universe and characters. I’m looking forward to trying the game, and this has probably increased my anticipation a little overall.