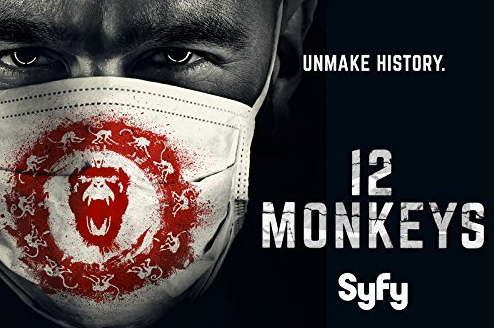 Once again I feel like a captive audience: slap the name ’12 Monkeys’ on a product and I will watch, listen to, bathe in, or consume it in whatever way is appropriate. Does this mean I can’t give a balanced review? Not at all, just like all the Marvel products, sure I’ll be there to see it happen but I’ll be pedantically critical of the end result.

12 Monkeys had it’s UK premiere last week, so we are only two episodes in. How does it hold up so far, and is it worth getting on board? In short, it seems ok and has potential, but if your time is limited maybe wait ’til the end to decide if it’s worth watching.

So, 12 Monkeys: The Series, obviously is very similar to the film, it is based on the same story, just as the film was based on the short film La Jetee. The hope is that the series will expand and develop the story, rather than retell it, adding depth and giving us a broader perspective on the setting and story.

The pilot episode draws a lot from the film, sometimes practically word for word as far as I can tell. Of course. They need to make sure that the fans of the film stick with it; there’s no point in going too far and alienating the established fandom. As a result, the first episode seems a little like a high school stage production of the film, but has enough engaging elements and originality to keep you interested, as well as lots of nods to the source material and different interpretations on the familiar characters. 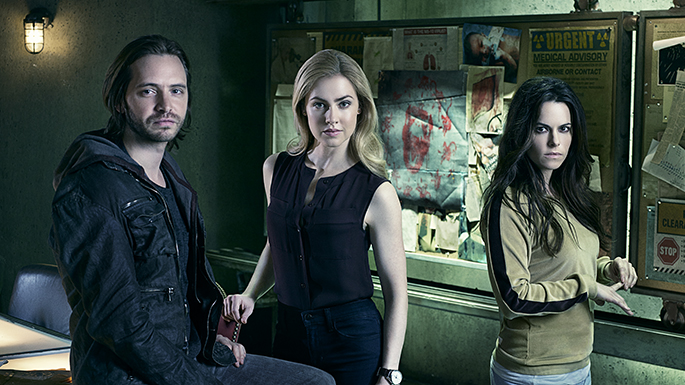 Aaron Stanford (whom we all know as Pyro from X-Men 2) is hard to take as James Cole, being as he is so physically different to Bruce Willis who played Cole in the film, but also seeming to be consciously trying to take a different approach to the character. There have already been a few hints dropped about how he is special and different, perhaps a ‘Chosen One’. Where Willis’ Cole was an ordinary man, Stanford’s is not. However, I like what he is doing so far and I think he could make for an acceptable new version of our time-traveling protagonist.

On the other hand I find Amanda Schull completely implausible as Cassandra Railly, plus I think the name change in reference to the Cassandra complex is a little cheap. She seems too young, not self assured enough, somewhat two-dimensional. She does not come across as a respected scientist, for me at least. We’ll see what they do with this in future episodes, but I do feel that SyFy are generally pretty poor at casting actresses, so don’t have very high hopes.

Making up the rest of the cast we have two Oz alumni: Zeljko Ivanek and Kirk Acevedo, following on from Fringe to boost his sci-fi CV. Both of these men should hopefully add some acting credentials and a bit of ‘grit’ though neither have a reputation as leading men or long term roles. We are introduced to Emily Hampshire in the second episode, another major character rewrite that could divide the fans of the movie. She delivers a performance by the numbers for me, again a little too much like the movie in dialogue and delivery, but there’s plenty of time to make the role her own. In the future we meet Barbara Sukowa‘s character, hamming it up to the nines and with lots of nods to the movie. Like a lot of things in these early episodes they are playing it safe, balancing the source material with the new direction, and I think hers will be one of the characters that breaks out of the slightly cheesy homage we have seen so far.

In episode two there are hints at the changes in direction the show will be taking, enough to keep me interested for certain, although for now there seem to be some big plot differences. I hope the new elements will mesh nicely with the movie mythology so the two can stand together telling the same story in different ways, rather than in opposition, creating conflict.

It does seem like the show has a lot going for it, not least the brilliant source material, but that it is a SyFy production so who knows where they will go with it? I spent a lot of my time watching it wondering whether it was just director Terry Gilliam that made the film so good, or if the story will stand alone. Hopefully this series will help us answer that question. SyFy have been working towards this for a long time, and hopefully this will be the flagship product that helps them step up a level. Of course I’m sure they won’t let us down on Sharknado 3, but I would very much like this to be the start of some quality TV sci-fi from them.

I'm Mel, currently living in Sheffield, but originally from the other side of the Pennines. I'm a lifelong gamer, RPing from a worryingly early age, and basically raised as a geek - I don't think I ever had another option! Any spare money I have gets spent on comics, photo gear or lucha masks, and any spare time I have, when not gaming with friends, is wasted on Sims, Minecraft and trashy movies.
More Goodness
12 MonkeysAaron StanfordAmanda Schull